The staff at the new Embassy Suites hotel downtown has no illusions about how the public generally thinks of hotel food.

“There are definitely a couple of challenges,” said sales and marketing director Tasha Houck. “First, there’s the perception of quality.”

That has made the relaunch of E.S. Founder’s, the restaurant inside the hotel at 741 N. Phillips Ave., an interesting experience.

Though he most recently worked as head chef at Whiskey Cake, Keith’s first kitchen job was for famed Louisiana chef Paul Prudhomme in New Orleans.

“He was a great teacher,” he said. “He was one of the most patient chefs I’ve ever worked with.”

Perhaps the most important lesson he learned was about mise en place, the French term meaning “everything in its place.”

Mise en place is the art of having everything someone needs ready before they start cooking, and in a job where Keith cooks for parties of four and banquets of 400, it’s a vital skill, he said.

“It’s all in the prep work,” he said. “If you’re not ready, the guests will notice.”

Instead, Keith hopes guests notice that his dishes are fresh and approachable.

Keith knows the new menu has to walk a very fine line. It needs to be familiar enough for anyone to feel comfortable ordering lunch or dinner, but also different enough that people choose to eat there.

What he has hit upon is a subtle nod to his experience with Prudhomme, adding unexpected flourishes of flavor to traditional dishes.

His chili-poached shrimp presents as a fairly straightforward shrimp cocktail, but the draw is in the details.

The zing of cocktail sauce and the mild sweetness of large, perfectly cooked shrimp is a favorite for a reason. But Keith’s addition of an avocado salsa below a layer of smoked tomato cocktail sauce gives each bite a different dimension. 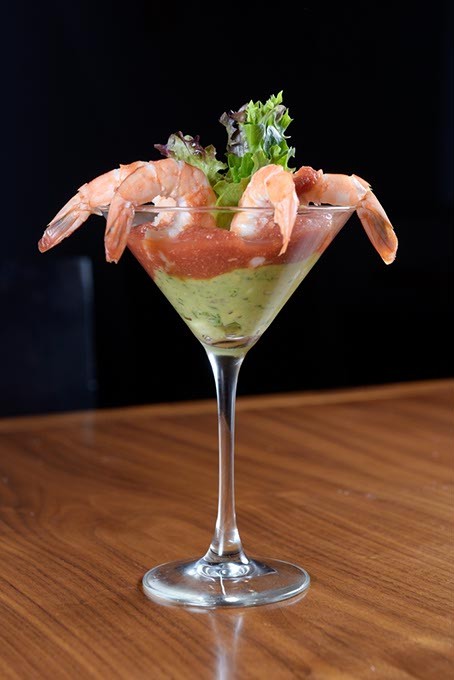 Another favorite addition is Black and Blue Quesadillas, partly because Keith said he can eat one while standing.

While convenience is important for a chef on the go, he has also made some changes to keep what could be a ho-hum appetizer interesting.

Chicken is blackened to add spice and then folded in with cheddar, mozzarella and blue cheese and onion marmalade.

“It’s spicy and sweet with a hint of red onion and the saltiness of blue cheese,” he said.

Though E.S. Founder’s is geared toward restaurant diners, part of Keith’s job is feeding large groups who are staying or meeting at the hotel.

“You have to be able to simplify your ideas,” he said.

Putting together quality plates of food for any size group requires planning, skill and dedication. He cooked for large groups at Whiskey Cake, but Embassy Suites further elevates the concept.

Keith is still dedicated to using fresh products and receives fresh produce six days a week rather than stocking kitchen pantries with shelf-stable ingredients. That is what toppled meatloaf, one of the fledgling restaurant’s biggest sellers, off the menu.

After Keith joined the team, he phased out made-ahead meatloaf and replaced it with dishes that have broad appeal, like the pan-seared salmon the restaurant served in June during Oklahoma City Restaurant Week. Herb-crusted fish is served over a bed of sautéed spinach, quinoa and asparagus and reflects his passion for cooking seafood.

Wilson said the dish was a hit during Restaurant Week, which served as a test run for the new concept.

It can be hard enough to run one successful business, much less two under the same roof, but Houck said Embassy Suites’ secret weapon is its location.

With quick access to interstates 235 and 40, the hotel brings in plenty of regional visitors. Proximity to Bricktown is another selling point for guests.

“It’s a very approachable area. We get that from all ages,” Houck said. “It’s an easy place to come for a drink before you go down to Bricktown.”

Guests from rural areas are sometimes intimidated with the bustle of the city’s entertainment districts, so Embassy Suites offers free shuttle rides within a five-mile radius of the hotel. There was also a summer “staycation” special for people looking to get away without going very far, she said.

And that’s a draw for the restaurant, too. Being so close to the State Capitol and the University of Oklahoma Health Sciences Center, Houck said people visit for low-stress lunches or after-work drinks.

Still, without a sign out front or a hostess stand inside, it can be challenging for people to find E.S. Founder’s. Part of the draw of hiring Keith as head chef is that when people do make their way to the restaurant, they will remember it.

“We wanted an affordable, approachable and forward-thinking menu,” Houck said. “And with his banquet experience, Frank really is the best of both worlds.”

After the staff has the new menu down, Keith said he will roll out daily specials and work on dishes that might become the restaurant’s next menu.