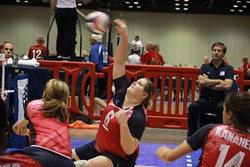 Erickson is among 11 University of Central Oklahoma-based athletes traveling to the 2016 Summer Paralympics in Rio de Janeiro for sitting volleyball, a fast-paced version of indoor volleyball that requires participants to remain seated on the court during play as they scoot around to extend rallies and score points. The Paralympics is the highest level of global competition for disabled athletes.

The U.S. has never won Paralympic gold in sitting volleyball. More than just making America great again; Erickson wants to take the team where it has never been before.

“I want to go beat them,” Erickson said. “London was more like, ‘I want to go and have fun.’ In Rio, I just want to go and beat the crap out of China and listen to our national anthem and come home with a gold. That’s all I want from life.”

International competition once seemed like a fantasy for a young girl who spent seemingly most of her life in a cast.

Erickson broke her right leg as an infant. The fracture was pseudoarthrotic, meaning her body perceived the break as two bones. Erickson underwent 18 surgeries from the time she was born to age 8, but no attempt to regrow the bone would ever take.

Her early childhood was spent strapped into a walking boot and on tiring pain management medications. Her mom played tennis, and her dad was a college football player. It bothered Erickson that her leg kept her from participating. She remembers marveling as she and her sister watched the gymnasts on television during the 2000 Olympic games. Like many other girls, her dream was to one day compete on that stage.

Soon after, doctors came to Erickson and her parents with a difficult choice: Amputate the troubled leg now and begin adjusting to life in a prosthetic or keep trying to correct the fracture surgically with the possibility of amputating in the future anyway.

“We just decided after 18 failed [surgeries], it was just like, ‘Give it a break and let me be a kid,’” Erickson said. “We just went ahead and amputated then.”

For many, losing a limb would be debilitating. But Erickson said she felt liberated. The cast and drugs were gone. She was able to compete athletically with other children. Her prosthetic finally made life normal.

Erickson was 15 years old in 2008 when she traveled with the national team to Beijing. They eventually took home a silver medal. Erickson and the U.S. again won silver at the 2012 Paralympics in London.

The London Paralympics was a bit of a disappointment for Erickson, she said, because the team was unable to improve upon its last result.

“We didn’t have a deep bench; we didn’t have people to bring in,” she said. “People just weren’t as experienced.”

The national team again finished second to China in the 2014 world championships.

This year feels different. Erickson said the team is performing at one of the highest levels of play she has seen in her national career. It is also a deeper and more experienced team across the board. She feels confident in knowing that the drive to score points is spread across the unit.

“There’s no reason we shouldn’t come home with anything but a gold, in my opinion,” she said.

If the U.S. finally does take gold in sitting volleyball this year, the national program’s partnership with the University of Central Oklahoma could be credited as one of the key contributing factors.

In 2005, UCO became an official Paralympic training site and the host site for both the men’s and women’s sitting volleyball teams. Before that, athletes like Erickson had to leave home for weeks at a time to participate in training camps that travelled from state to state.

Taking root in Edmond makes for more routine, convenient and consistent training. Many athletes choose to enroll in the university as well. There are at least eight UCO resident athletes and alumnae on the women’s team. The men’s team features three resident athletes.

Many students have a hard time balancing college and life, but it’s an especially challenging task for Paralympic trainees, Erickson said. She works at Dick’s Sporting Goods and as a volleyball coach in addition to her training and schoolwork, but she knows it’s not possible for everyone.

“[UCO has] done awesome because we have courts we can use every day; we can come in and do extra practices,” she said. “They provide housing, which is huge for us, because we don’t have to go out and find another job; we can focus on training.”

It’s almost counter to logic to say an amputation could benefit a person’s athletic future, but as Erickson heads to her third consecutive Paralympic games, she can count the decision to live with a prosthetic leg as one of her best life decisions.

“Right after I got fitted for that prosthetic, my life was easy,” she said. “I could play sports. I ran track, which will never happen in my life again. I’m a thrower, not a runner.”

Erickson’s artificial leg has carried her to her sport’s pinnacle event time and time again, as has an unbreakable will.