“Our program has been around for a long time, but we find that a lot of people don’t know about it unless they are already in the career tech programs,” he said. 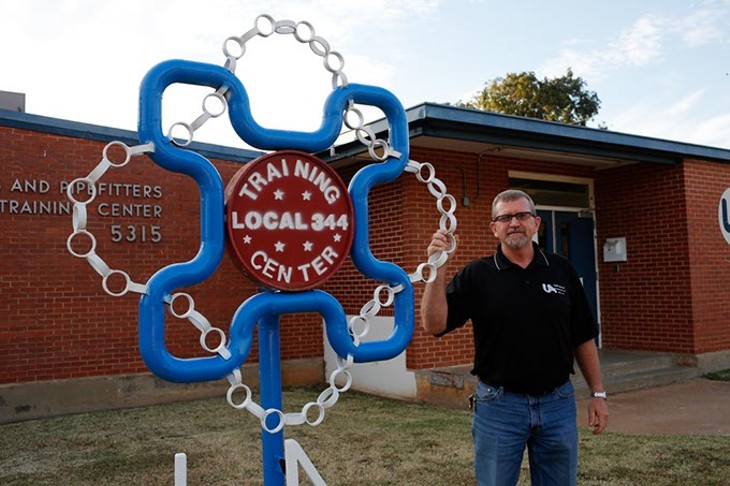 Nearly 85,000 job openings in the state remain unfilled due to a lack of skilled manpower, Natalie Shirley, Oklahoma secretary of education and workforce development, said recently.

“[The shortage is in part exacerbated by a misconception that] everybody should be going to college,” added Tara Barlean, state director for the American Subcontractors Association. “From our standpoint, that simply is not true.”

Many of the 84,897 job vacancies do not require two- or four-year college degrees. For example, plumbers, pipefitters and electricians instead call for training and certification provided by vocational schools and apprenticeship programs.

“Our program has been around for a long time, but we find that a lot of people don’t know about it unless they are already in the career tech programs,” he said.

The Joint Apprenticeship and Training Program also places students with union-affiliated subcontractors, who are required by the union to assign them a journeyman, or licensed plumber/pipefitter, to help them learn the trade. The program is certified by the U.S. Department of Labor.

Apprentices work for subcontractors during the day, earning valuable, on-the-job field experience. They also attend classes two nights a week from October to April at the training center.

“It’s a lot of math in the first and second year,” O’Donnell said. “And then once they reach their third year, they go off to their particular trade [in the training sequence].”

The heavy use of applied math can be a challenge, and for that reason, applicants must have a high school diploma or GED in order to be accepted into the program.

O’Donnell said that “about 40 percent” of students come to the center with GEDs and the on-the-job math training they receive during the program is critical to their future success.

One such apprentice is 38-year-old Charles Canty, a Chicago native and retired Navy veteran. Nearing the end of his five-year Plumbers and Pipefitters apprenticeship, Canty speaks bluntly about its value.

“I’ve come to realize now, even as a fourth-year apprentice, I make more money and better benefits than most people that have gone to college,” he said.

Canty told Oklahoma Gazette that he was stationed at the Navy E3 maintenance facility at Tinker when he retired. At first, he considered using his GI Bill benefits for college.

Instead, he chose to enter an intensive plumbing and pipefitting program that quickly placed him well into the apprentice levels of the trade. His skills fill a need that he and his Oklahoma employers know all too well.

“Right now, America is facing a serious craftsman shortage,” he said. “Baby boomers are retiring. That’s a fact. There [are] not enough people to take these jobs of being the welder or the pipefitter or the sheet-metal man or the electrician.”

Oklahoma’s career tech programs cover most of the state and are designed to help train people of all ages to move into careers that don’t immediately require college degrees. They are also effective for high school students starting to explore employment paths.

O’Donnell said that the union’s apprenticeship program works closely with state career tech programs and offers a placement outlet for students once they earn a high school diploma or equivalent.

Its strategic partnership with Tinker Air Force Base in Midwest City has a solid apprenticeship component, made easier because of its on-base campus.

Cindy Friedemann, Metro Tech’s executive officer for district strategy and development, explained that after six months in the program, “students actually have the opportunity to apply to work at Tinker” and “if they are hired, they start working at Tinker during the day and then [the program is] so flexible and agile [that it] train[s] them at night.”

Dennis Portis, Metro Tech’s associate superintendent of instruction, said not all of its programs utilize that model, but, “if [they] could say one day that all of [their] programs had apprenticeship models that tied to it, it would be a great day.”

Portis, O’Donnell and Barlean made similar comments regarding the need for a broader scope of training and teaching opportunities for both Oklahoma workers and employers. Education leaders must work together to develop strategies to better equip youth and adults so that jobs can be filled.

“Everyone needs to see value in each other in order to make it happen,” Portis said.

Print Headline: Alternative paths,  These days, establishing a successful career isn’t always contingent on the ability to access or earn a college education.