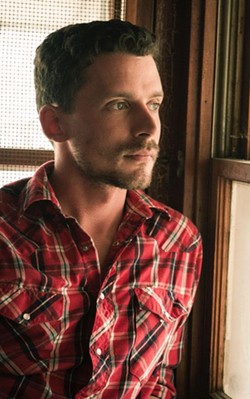 Proceeds from the Evan Felker & Friends show help the coalition fund the Woody Guthrie Folk Festival, which returns July 13-17. The annual event began in 1998 to honor its namesake and happens each year on the weekend nearest July 14 to celebrate the iconic folk musician’s birthday. For 17 years, entry was free. However, in 2015, parts of the festival charged admission to offset lodging and transportation costs for its annual roster of music acts. Artists donate their time to perform in WoodyFest.

Felker will play as part of The Natural Disasters, a band his friends created for Friday’s event. Felker said a singer-songwriter hosting a concert benefiting the memory of an Okemah-born folk icon is fitting.

In September, Felker and the Troubadours were recognized as Writer of the Week in American Songwriter magazine. Felker said he owes his talent to his teenaged discovery of Red Dirt music.

“At about the time when a lot of my buddies were going off to college in Stillwater and coming back on the weekends, partying and stuff, they were bringing back music like [Cross Canadian] Ragweed, [Jason] Boland and all that stuff,” he said. “I think I was probably 16 or 17.”

The Stillwater Red Dirt sound took hold of Felker, changing his perspective of what a musician was and could be.

“Anything that was sort of underground with really good songwriting, I remember I latched onto that because I thought you had to be Garth Brooks or Kurt Cobain to do well,” said Felker.

It is Red Dirt’s tradition of songwriting that Felker grasped, and it has become his and the Troubadours’ calling card.

“It seemed to be from an honest person’s perspective, to a large degree. It felt homemade, a real person writing a real song and it being good and being appreciated for what it was,” he said.

As one would expect, Felker’s songwriting ability and focus has changed over the years.

The lyrical clarity with which Felker now writes affects his song’s subjects as well as the form.

“I probably write more prose than abstract poetry,” Felker said. “Some of the earlier songs were what I call an abstract narrative. They weren’t quite as much about a linear story as much as pretty imagery.”

Lyrically, Felker is a precise writer, but subject matter is a different story. He said lyrical themes can be, and usually are, everyday occurrences, like women, natural disasters and drinking problems. However, it’s the viewpoint that is most important to him.

When speaking about lyrics, Felker comes off more literary than the average musician, no matter the genre. His use of phrases such as “abstract and concrete narratives” and “poetry and prose” bring to mind the image of a college English major more than a musician. Felker said he wants his lyrics to have impact.

“I kind of like tearing away at them. I like to go back through them line by line,” he said. “I usually go through and try to really get them, line by line, to where each line has some meaning.”