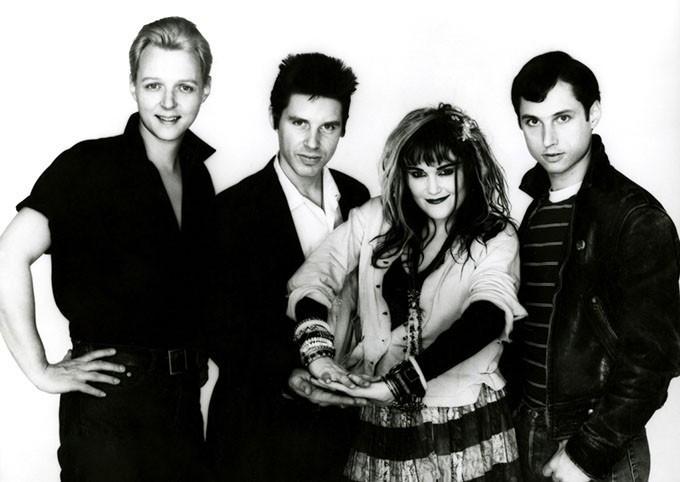 Cervenka achieved prominence in American punk’s early years as a vocalist and frequent songwriter for X, the influential, rockabilly-tinged punk act founded in 1977. The band’s earliest albums, including 1980’s Los Angeles and 1981’s Wild Gift, are regarded as some of the most significant projects in rock ’n’ roll history.

Her influence extends beyond the L.A. punk scene. Cervenka first crossed paths with Oklahoma City-founded pop-punk sister duo Skating Polly in 2010 at a show. She hung out for a while with members Peyton Bighorse and Kelli Mayo (then just ages 14 and 9) and was immediately impressed by their extensive knowledge of punk music.

She exchanged contact information with the girls, and they sent her Skating Polly’s 2011 debut Taking Over the World. Soon, Cervenka was personally invested in their artistic development. She produced the band’s sophomore record Lost Wonderfuls.

“Their first record was really good and they were just children then, so you could just tell that they were going to get better and better,” Cervenka said in a recent Oklahoma Gazette interview. “They have more amazing stuff to do yet.”

Cervenka was eager to geek over Skating Polly during the recent Gazette interview ahead of X’s 40th Anniversary Tour stop May 3 at Diamond Ballroom, 8001 S. Eastern Ave. Skating Polly opens for X in that show and joins the band for other dates along the tour.

Cervenka’s son Henry Blake Mortensen, born in 1988 while she was married to actor Viggo Mortensen, is producing a Skating Polly documentary that she said is nearly finished. For Cervenka, Bighorse and Mayo are now considered extended family.

“I think they’re super talented and wonderful to be around,” she said of the duo, who relocated from OKC to Tacoma, Washington.

Cervenka said she grew up in a time and place removed from the opportunities Skating Polly and other young female musicians now enjoy. As an adolescent, the possibility of being in a band — especially one that bucked convention in the ways X eventually would — never occurred to her.

As a child growing up in Mokena, Illinois (she moved with her family to Tallahassee, Florida, at age 13), she let her mind take her to places reality could not.

“That was the early ’60s, and girls couldn’t even play baseball,” she said. “I lived out in the middle of nowhere in the country, so there was no chance [of starting a band]. Everything was in your mind, and it was all about imagining things — you were a spy or anything through your imagination.”

Even outside of a band, Cervenka’s young mind sought ways to express itself. She became interested in writing and poetry. She still writes and has published several books of poetry.

Art and writing ambitions are part of what convinced her to move to Los Angeles at age 20. Cervenka said it was a time when young people could live comfortably with little money. She moved in with a friend and began working at the Beyond Baroque Literary Arts Center in nearby Venice.

Not long after landing the job, she met future X bandmate-slash-husband John Doe (they divorced in 1985) at one of the center’s open mic nights. A few years later, bassist and vocalist Doe invited Cervenka to lead a band he recently formed with guitarist friend Billy Zoom. She agreed, although a music career was never something she had considered.

“I didn’t come to California to be in a band, and it never occurred to me to even think of being in a band,” she said.

As a poet, Cervenka naturally fell into a songwriting role. Though similar, she said working within the constraints of the typical song format means music writing requires a lot more self-editing.

“My poetry kind of lends itself to songwriting because of the way I like to rhyme,” she said. “My first song, I just wrote all the words and it was set to music. Then on certain other songs, I would write most of it or part of it or maybe just the first line, and John would bend it in to fit the song, or I would bend it to fit whatever the music was.”

X’s 40th anniversary tour includes Cervenka, Doe, Boom and drummer D.J. Bonebrake. They are also joined by a fifth member, Craig Packham, who fills in on guitar and drums when Zoom or Bonebrake play saxophone or vibraphone.

Cervenka said it would be an amazing accomplishment just to live for 40 years, not to mention being in a band for that long. Hitting the milestone anniversary was a natural cause for celebration.

“It’s just logical,” she said. “It’s been 40 years and people like to round things out.”

Cervenka was keenly aware of how special the late ’70s and early ’80s punk scene X was part of was. She reveled in every moment and still looks back fondly on the best years of her life.

“It was all-encompassing and just fueled by alcohol or whatever,” she said. “It was fun and exciting, and we were young and had all this energy. Life was so easy back then.”

It would be harder, she said, for X to break into music the same way in today’s industry-focused climate. Cervenka said X would be like one of the modern independent bands that swears off superstardom in the name of art and fiercely personal expression.

“I think now everything is also really sexualized and monetized and corporate,” Cervenka said. “It’s all about winning and being a billionaire and being beautiful and being hot. It’s not about content.”

Cervenka admits that she is, to an extent, conflicted about her past. On one hand, she wishes she and her bandmates had taken their music more seriously — perhaps partying less and working more on their craft. Then again, she also had the best times of her life.

The pioneering punk queen spends little time dwelling on what might have been because there’s no way to change the past. Instead, she focuses on assisting young talent like Skating Polly.

And to a degree, the sisters assist her as well.

“I’m sure they’ve given me some advice at some point,” she said.