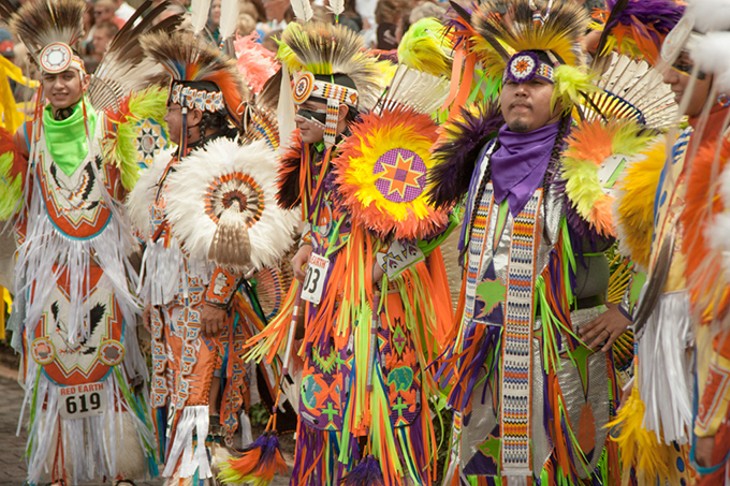 Walking through the crowd at the 32nd annual Red Earth Festival showcasing Native American dance and art, you might hear people speaking German. A popular series of books written by Karl May in the early 20th century sparked the country’s infatuation with indigenous American culture.

“They’re very incorrect, but the kids that grew up with them love them,” said Eric Oesch, Red Earth’s co-director who is preparing for his 19th festival. “There are these re-enactor groups in Germany where they get together and dress the way they think that native people dress and dance the way they think they dance, so when they’re here, they just can’t get enough of the culture.”

Since it began in 1987, the arts festival, which runs June 8-10 at the Cox Convention Center, 1 Myriad Gardens, has attracted visitors from Great Britain, Australia, Russia, Finland and China.

Though Oesch said he can’t say whether visitors previously unaware of actual Native American traditions leave with a better understanding of indigenous heritage, he said the festival’s goal is to raise awareness through art and community.

“For our purposes, it’s a way to share culture,” Oesch said. “You just do that by extending an open hand and a friendly welcome.”

“So at that time, there were a bunch of civic leaders, the Oklahoma City Chamber of Commerce and business leaders and people from tourism and the arts, and they said, ‘What makes Oklahoma City unique? What’s special about Oklahoma?’ And they determined it was our native culture,” Oesch said. “So they started the Red Earth Festival with three months of planning, and it was an automatic, instant success, and we’ve been building on that foundation ever since.”

The event, which combines an art show with a powwow and parade, has been so successful its model has been duplicated many times.

Oesch said Red Earth can’t match the art and dance prize money offered by some of the other organizations, like casinos, that hold similar events but the art festival’s prestigious reputation apparently attracts artists regardless of monetary rewards.

“I think the prestige of winning at Red Earth has started many, many careers,” Oesch said. “Every year, we feature what we would call a signature artist, and they’re featured in all of our marketing campaigns. … And that’s how some of these artists have become recognized throughout the country and their careers have just skyrocketed.”

The festival begins 10 a.m. June 8 with a parade around Myriad Botanical Gardens.

The festival features more than 120 artists selected by jury, with works for sale in the market in the convention center, but this year, the festival will expand into the eastern portion of Myriad Gardens to accommodate approximately 15 food trucks, children’s activities, live entertainment and a hand game tournament. Re-introduced last year, the hand game tournament, a traditional competition in which one team attempts to guess where bones or sticks are hidden while the other team attempts to distract and confuse the situation with songs, drums and shouting while passing the playing pieces around, inspired Red Earth to expand into the outdoors.

“We had the hand game tournament last year,” Oesch said, “and it was so successful it was too successful because it was so dang loud. It was loud and it was awesome, but we’re moving it outside just simply because we had a hard time hearing in the art market.”

Oesch thinks the boisterous noise generated by the hand game will be good for business.

The events outside the convention center are free, but admission to the art show inside is $11 for adults. For the third year in a row, children age 18 and younger are admitted free of charge. Oesch said the decision to give children free admission has resulted in more young people seeing the festival.

“It’s allowed families to come that beforehand maybe couldn’t afford to come,” Oesch said, “and we’ve also seen a big influx of daycare centers and youth groups and church groups that bring kids down to the parade on Friday, and then they can all go inside and see the artwork.”

Another change Red Earth made this year is moving the powwow from Friday to Saturday and Sunday because many of the more than 500 dancers from as many as 100 tribes expected to attend have day jobs that require them to work on weekdays. Oesch said the powwow dancing is one of the best introductions to the festival for first-timers.

“Most people that have never been to a powwow before, that’s probably one of the most exciting things for them to see, the grand entry of dancers,” Oesch said. “And that’s where all of the dancers will line up and parade, dancing single-file into the arena and circle the arena until all the dancers are completely in the arena. We start with the golden age first, and the tiny tots round it up at the end.”

Unlike the National Finals Rodeo, Oesch doesn’t foresee a time when the festival will outgrow Oklahoma City.

“I don’t see us moving to another city,” Oesch said. “We have had invitations before, but we haven’t moved. Oklahoma City is our home, and Oklahoma City has always been very supportive. … This is where are volunteers are. This is where our families are.”