Moviegoers have come to expect a few things from The Fast and the Furious franchise.

The films won’t carry the most believable or intelligent plots. They won’t stun you with sharp dialogue. They sure as heck won’t refrain from boob shots.

These things make sense for a film series predicated on a Nitro-fueled, sex-rife, hard-body culture.

But even for those unfamiliar with the world of cars and barbells, this movie was stimulating. For the very particular crowd that appreciates this sort of entertainment, it probably couldn’t have been better.

There’s a certain helplessness one feels in the face of complete absurdity, when the rules of the road aren’t followed and disbelief must be suspended. Such is the spirit of so-called movie magic, especially in Furious 7, which opened over the weekend in local theaters.

Sometimes, your brain needs to shut down in order to forgive the impossible scenes playing out in front of your eyes.

Luckily, this isn’t hard. With an already-boiling hot pot of sex, cars and action, the film throws in cameos from the likes of Iggy Azalea and Ronda Rousey, Bourne Trilogy fight sequences, a new director and some of the most ridiculous stunts you’ve ever seen. The effect? Furious 7 hits where it needs to: the head, the genitals and the heart of its passionate fan base.

The go-to tonic for dullness, it seems, is sex. After Furious 7’s first drag race scene, you kind of forget to care about reality. You’re living the poor man’s dream: girls, cars and Corona.

On top of this base appeal, the franchise has done a fairly decent job developing a wealth of characters to promote themes of family and loyalty.

But to understand what’s going on in Furious 7, you really need to have followed it since day one. This isn’t even close to a standalone movie. There are innumerable self-references and allusions. There’s no character development. The bulk of the story has already happened. This is just an ending. 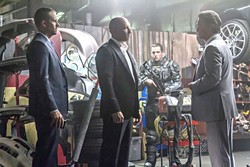 Tragically cut short by a fatal car crash, actor Paul Walker is honored throughout the movie, which features an extended homage to his legacy with the series.

Each character gets time with him, and the audience has the opportunity to reflect alongside the characters they’ve invested in.

The movie is the cast and crew’s way of saying goodbye. If nothing else, this makes it worthwhile.

There were always going to be undertones of nostalgia and impending separation in this film. It was evident the moment news of Walker’s death hit. There needed to be closure. But the tragedy of his accident lends the opportunity for a true message. Family matters. Family is always with you. It gives this pure adrenaline entertainment a soul.