Increasingly, in our culture, people have their feet in different worlds, as the metaphor goes. As often as not, the binary perspective does not suffice; there are more than two worlds we inhabit and more than two masks we wear. That metaphorical dual citizenship is the subject of Mustang artist Holly Wilson’s installation A Foot in Two Worlds.

Wilson is an Oklahoma native, but she grew up in various contexts and places. Her father was an artist and a teacher, so the family moved where his work took them, most notably to a Native American boarding school in Lawton and a Cherokee boarding school in North Carolina.

“I never attended boarding school, but I grew up on the grounds,” Wilson said. “When we moved to Lawton, it was a move to a different kind of world.”

That theme is repeated throughout Wilson’s life, including her dual heritage; her mother is part Delaware and Cherokee, and her father is Anglo. Even in her art, Wilson does not settle for one world. Her installation features sculpture and photography.

“I originally got into art school to do photography,” Wilson said, “but I ended up getting my Bachelor of Fine Arts in ceramics.” 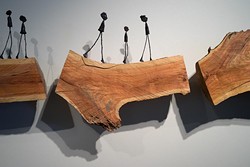 She completed two more degrees, both masters, one an M.A. in ceramics and the other an M.F.A. in sculpture. Even with her education, her world was divided. The first came from Kansas City Art Institute; the other two she earned at Stephen F. Austin State University in Nacogdoches, Texas.

A Foot in Two Worlds is a study in what Wilson calls the dance between her sculpture and her photography.

“There are seven sculptures and seven color photographs,” she said. “Sometimes, I take a picture and I think, ‘That would be a beautiful sculpture,’ and other times, I see a scene that reminds me of one of my sculptures, so I shoot it.”

This interplay is on display at Oklahoma Contemporary Arts Center at the State Fairgrounds, 3000 General Pershing Blvd., through Aug. 21. The sculptures are on a large scale, as are the photographs. The photos are all 3 feet by 2 feet, whereas the sculptures are three to seven times that size.

One of the pieces, Bloodline, is a 22-foot tree with sculptures of human figures walking atop the 29-inch-high trunk. Each block of humans represents one generation of Wilson’s bloodline, working backward from her children to her oldest known relative.

“I went back as far as the Dawes Rolls would let me go,” Wilson said.

The Dawes Rolls were lists of Native Americans who chose to enroll as members of the Five Civilized Tribes from 1898 to 1906.

As part of the opening reception, Wilson will participate in an artist talk about the pieces. A Q&A also will be part of that event.

“I talk until people start to glaze over, and then I let them ask questions,” Wilson said. “Each piece has a story, and each piece is one of a kind. In a real sense, I only have to tell the story once by my art, so I don’t duplicate stories.”

A Foot in Two Worlds

Participants must be 8-12 years old.