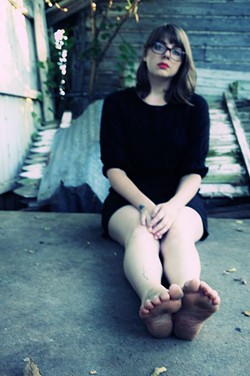 Local harpist M. Bailey Stephenson started her latest project in an attempt to capture something significant in her life that was close to disappearing forever. By its completion, she discovered that was just the iceberg’s tip.

Stephenson, who performs as Sun Riah, is known for her avant-garde, contemplative and genre-defying singer-songwriter style. She incorporates unconventional playing and recording techniques to alter listener perceptions of how a harp is supposed to sound.

Stephenson began writing the project, which follows 2015’s Firefly Night Light, late that winter, shortly after the death of her grandmother. The harpist spent much of her childhood at her grandparents’ rural Oklahoma home and developed a deep emotional attachment not only to her grandmother, but to her house.

Her grandmother was literally born in the home in which she lived her entire life. After her father died when she was 3 years old, she was raised in an all-female household in the 1930s.

Some family members contemplated demolishing the home and putting something else — like a large garden — in its place. Stephenson’s father, who lived next door, had the property appraised. The house was nearly worthless in terms of market value, and there was no chance of someone moving into it.

Still, the thought of losing the home forever hurt Stephenson.

“My grandma’s house was this constant place for me,” she said, “and so it was really shocking to think about it not being there anymore.”

She began writing Sitting with Sounds to celebrate the life of the cherished home. The family later decided to keep the house, but Stephenson’s writing was already becoming more personal. The album was no longer about losing a home. It was about loss.

The music video for her single “Grandma’s Room” was filmed in the bedroom Stephenson’s grandmother always slept.

“That room is pretty empty, and she lived in there for 88 years,” she said. “She was a very practical person.”

Sun Riah has always represented some level of personal vulnerability, but Stephenson said she noticed that on Firefly, she did things to shield herself, like intentionally sing in ways that prevented her lyrics from being understood. There is noticeably more vocal clarity on her new project.

“I wanted this to be something that, when my family heard it, it would resonate with them,” she said.

Stephenson said writing Sitting with Sounds became her processing mechanism for coping with the loss of her grandmother and the guilt sometimes felt in grief.

“I hope the album is a source of reflection and maybe healing for people,” she said.

Stephenson stepped away from her new work with emotional peace and a greater appreciation for home in all its forms.

“It’s not just my love for grandma’s house and for the town, but for Oklahoma,” she said.