It’s called Naegleria fowleri but is often referred to as the “brain-eating amoeba.”

Naturally found in fresh bodies of water, Naegleria fowleri is a microscopic single-celled organism. It’s undetectable to those wading or swimming in lakes, rivers, streams or ponds.

A simple action, like a person diving or submerging their head into contaminated water, can lead to infection. The microorganism enters a person’s body through the nose and travels to the brain, where it destroys brain tissue.

Since 1962, 138 people in the United States have contracted the infection, and only three people survived, according to the Centers for Disease Control and Prevention (CDC).

In Oklahoma, health officials report seven PAM cases over the last 18 years. Most recently, a southern Oklahoma woman died after contracting the infection in August 2015 from swimming in the waters of Lake Murray State Park. The amoeba prefers warm water and is most commonly found in southern states.

This summer, Oklahoma Department of Health officials advise swimmers in nondisinfected waters to exercise precautions to avoid the microorganism and other water-related illnesses.

“There are things as an individual, whether it is swimming in a natural body of water or a small kiddie pool, that we can do to protect ourselves,” said Laurence Burnsed, an Oklahoma Department of Health epidemiologist.

To avoid infection, health officials recommend against swimming in stagnant or polluted water. The amoeba is often found in the sediment of shallow areas.

Swimmers should hold their nose or wear nose plugs when diving or jumping into water. They also should never swallow the water, nor should they swim in areas with signs saying “No Swimming.”

“When we get into our late summer period with hotter temperatures and during periods of drought, that is the right condition for the amoeba to multiply at higher levels,” he said. “That’s why we see a higher risk of exposure during the later summer.”

The CDC reports PAM symptoms start about five days after infection. Initial symptoms can include headache, fever, nausea or vomiting. As it progresses, patients can experience hallucinations, stiff neck and head swelling.

People who believe they were exposed to the amoeba should immediately consult with their health care provider and provide detailed information about possible exposure in a natural body of water, Burnsed said. 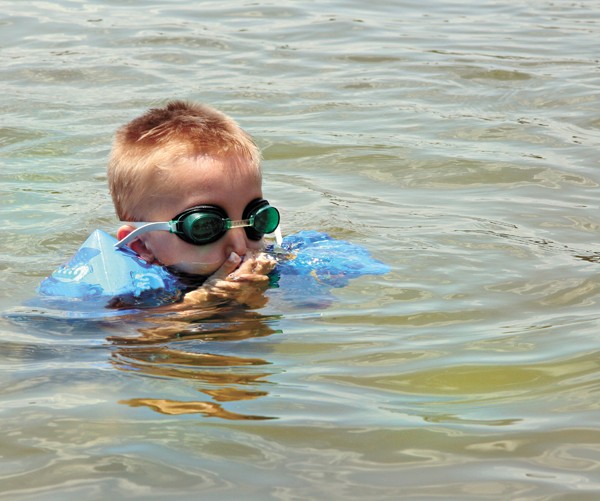 Algae blooms are most likely to appear in stagnant waters as temperatures rise, Burnsed said. Humans and animals that swim or wade in water with blue-green algae are at risk for rashes or skin irritations.

“Swimming in water with high concentrations of algae can cause irritation of the eyes and throat,” Burnsed said. “Breathing in the strong odor from the algae can cause shortness of breath or coughing.”

Burnsed warned that recreational bodies of water also can become contaminated with germs from rainfall and swimmers. Norovirus and E. coli can pollute the water, causing diarrhea, vomiting and stomach cramps in people who ingest it.

Similarly, stagnant water in wading or kiddie pools can become a breeding ground for germs. Burnsed recommended reading the instructions for draining and refilling pools.

Now is the time for Oklahomans to enjoy the state’s natural bodies of water and splash around in backyard pools. Following water precautions ensures swimming, wading and splashing will be safer and healthier.

“It is very important that people be aware of the risks and take certain precautions,” Burnsed said.