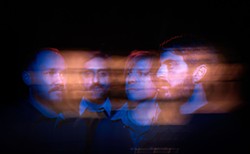 Songs by Explosions in the Sky are nothing if not emotive. The Austin, Texas-based instrumental post-rock quartet is so keen at giving musical expression to multitudes of life experiences that it is often enlisted to record movie and television show soundtracks, including Friday Night Lights and Lone Survivor.

While most of its tunes lack a lyrical component, the band’s tireless attention to detail adds cinematic depth to its work. Local fans can immerse themselves in the aural expanse as Explosions in the Sky performs 8 p.m. Saturday at The Criterion, 500 E. Sheridan Ave.

The band is also known for its methodic creative approach. Explosions was founded in 1999 and released its seventh and most recent studio album, The Wilderness, in April 2016. On it, Explosions rerouted its recording routine in an attempt to reconstruct its sound and create a more dynamic experience for their fans. The result earned critical acclaim.

Hrasky recently spoke with Oklahoma Gazette about the band’s creative process and how its music is often perceived.

Oklahoma Gazette: If you had to guess, how long do you guys usually spend working on an album in total?

Chris Hrasky: For this record [The Wilderness], writing it all probably happened over the course of a year. That’s not to say it was like eight hours a day every day for a year, but we were sending email files back and forth and talking about stuff. … I think we spent about two weeks in the studio, which is by far the longest we’ve ever spent recording an album. I think we came back a few months later to mix it over three or four days. The process probably started in earnest in mid-2014, and by summer of 2015 we were in the studio recording it.

OKG: The album came out a little over a year ago. Do you think your fans reacted to the album in the way that you would have wanted?

Hrasky: For the most part, it seems that way. You sometimes see Facebook messages and stuff saying, “Why did you change your sound?” or “Why did you do something different?” But, I mean, what are you supposed to say to that? That’s fine; you don’t have to like it. But, for the most part, it seems like people have been into it. They respond to the new songs when we play them live, but going into this album we wanted to change some things up. It just felt pointless to approach everything the same way we had been doing the last 15 years. It felt necessary to approach things in a different way.

OKG: How collaborative is the songwriting process usually?

Hrasky: It’s completely collaborative. That’s part of the reason I think it takes such a long time. ... Someone comes up with one little idea, and we all just build from there. … Someone will say to me, “Maybe try this with the drums,” and I’ll say, “Well, I feel like there should be this guitar line here.” It’s a very circular process, which makes it take a long time. There’s no one really in charge; we’re all just kind of together working on it. Ultimately, that’s very rewarding, but it definitely makes for a much slower process.

OKG: How does an album cycle usually get initiated? Is it a natural thing where it just feels like it’s time?

Hrasky: It just sort of happens somehow. … It’s just all of a sudden, we’ve got some ideas floating around and we’re just like, “OK, maybe we should start working on these.” No one ever puts a deadline on us to do anything. There are only just self-imposed deadlines in our minds, so it’s never like, “Hey, you guys need to have a record done in six months.” I think when we all start feeling antsy to do it and have new stuff is when we start.

OKG: It doesn’t sound like there’s ever a lot of outside pressure to create.

Hrasky: No. We would have never survived as a band under that sort of system. We’re pretty much in control of our own destinies.

OKG: One of the things people like about the music the band makes is that the meaning and feel is open to listener interpretation. Because of that, how often does the popular feedback on a certain song turn out to be something you weren’t expecting at all?

Hrasky: I think one that we hear a lot from people is that we make great music to study to. I find that interesting because on some of the more aggressive and rock parts, that seems strange to me. It would be way too noisy and too much going on for me to concentrate. That’s fine. … It’s a good thing.

OKG: Your show Saturday is your last stop on this leg of your 2017 U.S. tour. What is usually your mindset heading into the last show?

Hrasky: When it’s over, there’s always some relief, a sigh that’s like, “Alright; we’re going home tomorrow and we can have somewhat of a normal life again, at least for a little while.” We’ll be excited to get home, so we’ll probably be in pretty good spirits.

OKG: Are you working on anything else over the rest of the year?

Hrasky: We’ve got nothing other than shows this year. We’ve got a few things in the summer and then another U.S. tour in September, then I think we’re just going to try and take it easy for a while. I feel like we’ve been going pretty much nonstop, one way or the other, since the inception of the band. … We might end up doing some more soundtracks after that or start working on another record.

Print headline: Instrumental spectacle, Explosions in the Sky is destined to dazzle fans at Saturday’s concert at The Criterion.

Explosions in the Sky with Still Corners