A Norman-based Japanese artist tells stories through egg statues in his latest exhibit. 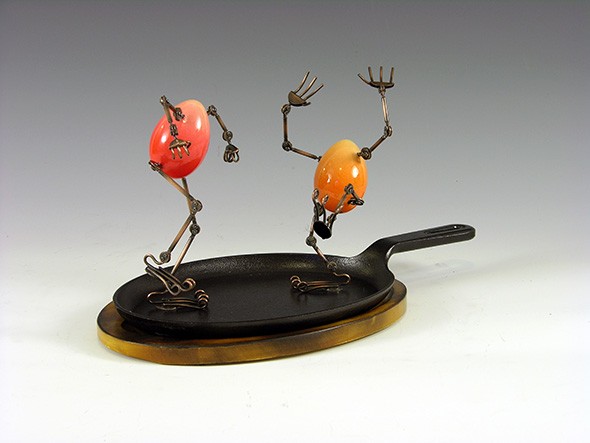 “For some reason, I am attracted, drawn, to the egg,” Orikasa said. “I think I like the idea that egg is a daily food that people can relate to, and it’s also the symbol of life.”

Eggtion Figures, open through March 22 at Studio Six, 3021 Paseo St., is an exhibition of Orikasa’s sculptures of resin egg-shaped creatures engaging in human behavior using arms and legs made from multi-jointed copper tubing. “Finding Serenity,” for example, features a delicately marbled multicolored egg striking a yoga pose. “Just Between You and Me,” meanwhile, captures two eggs mid-conversation, talking on a tin-can telephone.

“I started thinking about, ‘How can I tell the story by using an egg sculpture?’ and then I started putting on hands and legs of copper tubing, and then that’s kind of how I got started actually. … It’s really simple, and all the gestures accentuate the expression of what it is,” he said.

"This is kind of how it feels … to capture the gestures to tell the story about it instead of just saying it."—Tomoaki Orikasa tweet this

“Dancing in the Rain” finds an egg doing just that, holding up a leaf for an umbrella, and “Home Sweet Home” features a couple eggs hanging out in a nest. Some actions performed by the eggs in Orikasa’s sculptures, however, are more abstract. “Waiting” features an egg simply holding its hands folded, presumably in anticipation.

“I’m sometimes using my personal feelings to express what I’m wanting to say,” Orikasa said, “and I also kind of imagined what the people who are eggs in that world would want to do, and I start making a good little story.”

Working to help other artists create their own bronze sculptures, Orikasa said he is often impressed with the works, often inspired by Southwestern art imagery, but he began creating his Eggtion Figures series as a way to explore narrative storytelling in his work rather than attempting to recreate real animals or people.

“There are good sculptures out there,” Orikasa said, “but at the same time, I go, ‘So do I just want to depict what I see, or what do I do with my sculpture?’”

“Precious Moments” features an egg holding a smaller egg aloft. The title and the body language of the two subjects allows the viewer to infer the story and feelings being conveyed, but the resin eggs have no facial features to express their emotions. Orikasa — who came to the United States from Chiba, Japan, in 1994 to study business but became an art major at the University of Central Oklahoma instead after taking an introduction to jewelry making — said he has been using people’s body language and gesticulations for years to determine the meanings he doesn’t always glean from their words and hoping that they’re able to do the same for him.

“I have a language barrier here speaking English,” Orikasa said, “and this is kind of how it feels … to capture the gestures to tell the story about it instead of just saying it. So that’s why these pieces don’t have any facial expression.”

Because the eggs have no facial expressions of their own, the viewer can project their own moods and emotions onto the works.

“They can interpret how they feel when they’re looking at the piece,” Orikasa said. “It could be sad, it could be fun or it could be angry. It really depends on the people who are actually looking at it.”

Even though Orikasa is the one to create these figures, he said he also projects his own emotions onto them, causing their meaning and significance to change with his mood when he looks at them.

“I’m enjoying what I’m doing, and I’m discovering myself by looking at the pieces. Sometimes I just kind of look at the piece itself and go away and come back and … it’s a little different depending on how I’m feeling at the time. … If I’m feeling down or even if I’ve got some self-doubt about the piece, it really looks awful, and it doesn’t speak to me at all.”

Sometimes the scenes Orikasa is attempting to express are rather complex, but he thinks viewers will be able to recognize common elements from their own experiences and use those to fill in the story.

“In the piece called ‘You Silly,’” Orikasa said, “[a couple] is sitting on a bench, and the guy says something stupid, and the girl one is kind of pushing him away. … I saw it in a movie or something. I think it’s part of daily life.”

Occasionally, Orikasa draws inspiration from people-watching, and other times, he just tries to position his eggs in an unusual pose and create a narrative from that.

“Sometimes I’m just looking at people doing stuff, and I’ll get an idea from that,” Orikasa said. “And sometimes I’m just kind of sitting there, thinking about what I can do to make the piece more interesting, thinking about the posture of the piece and then playing with it. I also have a mockup that I can actually move around all the stuff before I actually get fixated on it. So I can kind of play with a doll and then I can say, ‘OK, this is interesting in the posture. Let’s see if we can make a story out of it.’”

Admission to Eggtion Figures is free, and Studio Six is open noon-5 p.m. Monday-Saturday. An artist reception with Orikasa is 6 p.m. Friday. Visit thepaseo.org/studio-six and oryartstudio.com.