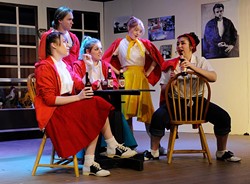 The Stage Door Theatre’s production of Come Back to the Five and Dime, Jimmy Dean, Jimmy Dean is so good, it might literally shut the place down.

The theater is based inside the Yukon Historical Society Museum and Art Center, a building that is in desperate need of repair, said Freida Penn, a member of Stage Door’s board of directors.

“The building is just falling down around our ears,” she said. “It’s over 100 years old.”

At one time, it was a school, and the site is still owned by Yukon Public Schools. The condition of the building is so bad, Stage Door can no longer keep its insurance to stay. Barring an extension on that insurance policy, Penn said Stage Door has been told it has until April to vacate the building, meaning Jimmy Dean could be its last show.

Penn called Jimmy Dean a “dramedy” and said while the play certainly has its funnier moments, the meat of the production is very serious.

It was written in 1976 by Ed Graczyk, and Stage Door’s production is directed by Denise Harris. The show follows an all-female fan club of iconic ’50s actor James Dean. Though the club gathers in the ’70s to observe the 20th anniversary of the actor’s death, flashbacks to the 1950s mean Harris has to essentially direct two casts.

“We’re working really hard to make the younger selves look like the older person,” said Penn, who added that the costuming and makeup were especially intricate in this production.

The cast took care to match mannerisms between older and younger versions of the same characters.

Penn said over the last couple of years, Stage Door has made efforts to push the envelope a bit from its traditionally G-rated offerings. Jimmy Dean certainly does this.

A transgender girl, formerly the only male member of the fan club, is brutally beaten in one scene after becoming so passable as a female that she “fools” one of the school’s rough-and-tough football players.

Much of the production, Penn said, is about how things in our past impact who we are today and reaching out to new possibilities in order to grow.

“You either branch out into the world and live life or you get stuck and you have regrets,” she said.

Stage Door tries to keep a balanced schedule of offerings, but Penn said many of its edgier shows are among its most successful.

“They might not come out here for a G-rated show, but your theater people who really like the theater and are knowledgeable [will come out],” she said.

Stage Door is hopeful the city paid for its insurance on a fiscal-year basis, which would extend its time into June. If not, it will have to end its current season prematurely. Two productions, Where the Lillies Bloom in April and Sordid Lives in June, are scheduled to be performed, but without a venue, they will be postponed.

Penn said the school system told Stage Door it can stay in the building as long as it has insurance and pays utilities. Stage Door is searching for a new building to call home.