Taste of a Fair showcases some of the top indulgent foods available at this year’s Oklahoma State Fair. 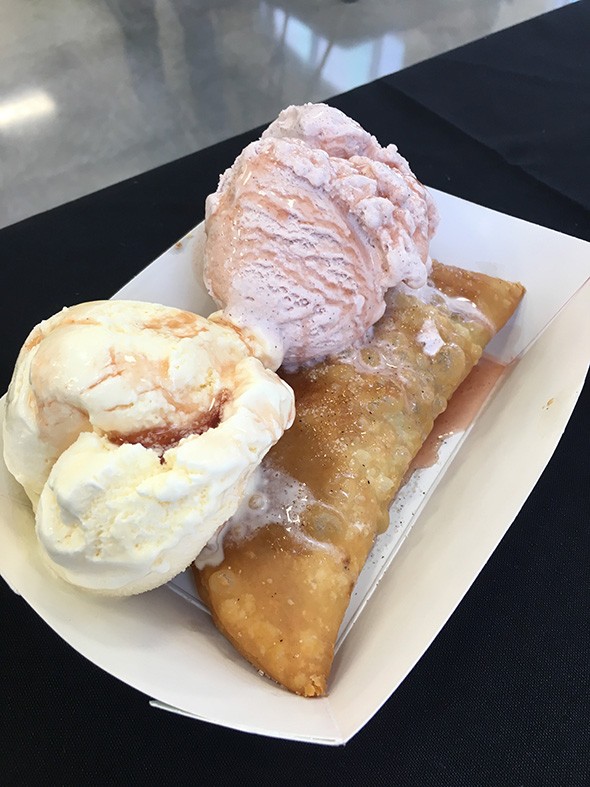 
What works: The crust on the Minneapple Pie is perfect, and C’est Si Bon’s catfish and boudin balls, Cutie Pie’s Concessions’ watermelon pie and The Urb Express’s honey pepper bacon dog are great.
What needs work: Oklahoma Pork Council’s Pizza Dawg needs melted cheese, and the smoked chicken salad isn’t as good as the dessert option at DJ’s Crème de la Crepe.
Tip: Cheese Curd Tacos is everything you want from fair food.
For the second consecutive year, I put my heart on the line for journalism’s sake by judging 15 items for the Great Taste of a Fair competition at Oklahoma State Fair, which is open to the public today through Sept. 22.

The Ultimate Minneapple Pie by Minnesota-based company The Original Minneapple Pie took home the overall title, the Fairest of them All, beating out longtime competition favorites the Honey Pepper Bacon Dog from The Urb Express, which won the slice of savory category for the third consecutive year, and the watermelon pie by Cutie Pie’s Concessions, last year’s overall winner.

The Original Minneapple Pie makes its first appearance at Oklahoma State Fair this year, and its signature product is a deep-fried apple pie topped with vanilla and cinnamon ice cream that is drizzled with an apple sauce that has the consistency of caramel.

It’s easy to see why it won the overall title. The product is the result of a recipe that is credited to a longtime Minnesota restaurant family that began at Cottage Grill in Rogers in 2008. George Atsidakos, the son of Andy, a Greek immigrant who worked his way from dishwasher to restaurant owner, got the idea to deep-dry individual apple pies.

After nine months of recipe testing, according to its website, the final product was born. The crust is a standout. Upon first glance, I thought it might be like a thin empanada shell, but it is thick and buttery and retains plenty of crispiness underneath the homemade ice cream. The Original Minneapple Pie is a must-visit at its location on Gordon Cooper Boulevard in front of Bennett Event Center.

The watermelon pie retains its crown in the Sweetest of the Sweet category, and for good reason. While a lot of pies will weigh you down, the watermelon pie is refreshing on a hot adventure to the fair. It’s watermelon crème filled with bits of fresh watermelon and topped with watermelon sugar and a fresh slice of watermelon. The graham cracker crust can be a little too crumbly, but the flavors and texture work perfectly in conjunction with the rest of the pie. 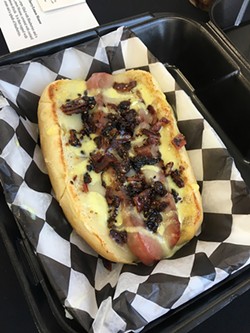 Cute Pie’s showed that it is more than sweets with its chicken and corn Frito pie entry into the completion. It’s tender shredded chicken with corn and beans that are topped with feta cheese, shredded cheese and cilantro. The watermelon and corn salsa that accompanies the dish is a lighter re-invention of the classic Frito chili pie. The Cutie Pie’s stand is located in front of Chickasaw Country Entertainment Stage.

The honey pepper bacon hot dog is becoming a powerhouse in the savory competition, claiming its third consecutive title. The all-beef hot dog is split and topped with pepperjack cheese, honey mustard and a ton of Interurban’s famous honey pepper bacon. I’m kind of surprised the item isn’t offered at any of Interurban’s restaurants, but scarcity keeps the anticipation high for its The Urb Express stand located in the middle of the Entertainment Plaza.

Interurban also entered its tequila pineapple raisin bread pudding into the competition, and it’s a very good dessert, just missing the upper tier of the dessert category. You can find it between Centennial Plaza and The Circle. 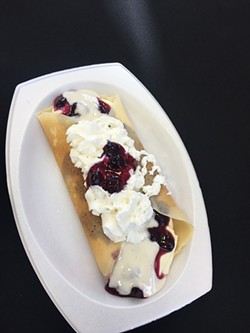 The blueberry lemon mousse crêpe nearly took the Sweetest of the Sweet category from the watermelon pie, in my opinion. From 21-year fair staple DJ’s Crème de la Crepe, located on Stagecoach in front of Bennett Event Center, the dessert crêpe was an excellent blend of fresh blueberries in a blueberry sauce with lemon mousse that is topped with custard, whipped cream and more fresh blueberries. The balance of fruits worked well together.

DJ’s dessert entry far outpaced its savory entry, a smoked chicken salad crêpe with honey mustard. The chicken salad was solid with walnuts, celery and grapes, but there was no smoked flavor and it’s hard to recommend over the many other savory options available at the fair.

It was a knock-down, drag-out fight for the savory competition between the honey pepper bacon dog and The Wonderboy by Diamond Dawgs. The Cap’n Crunch-crusted corn dog served with mustard is expertly cooked and the kind of fair treat you want to see. The only thing that kept it from the top spot is that the cereal is well-incorporated into the batter. I would have liked to see individual pieces; otherwise, it just tastes like a sweet batter. The stand is located between Bennett Event Center and Jim Norick Arena.

Local Cajun purveyor (three metro locations) C’est Si Bon has a stand on Kiamichi Place near the bandshell lawn. Owner Ken Mills’ fried catfish is delicately fried with a light batter and served with boudin balls that have a seafood stock. They’re served with tiger sauce, which is like a mixture of honey mustard and rémoulade.
Gilty Pleasure’s Cowboy Nachos finished third in the savory category. It scored points with me for using waffle fries in place of chips with pulled pork, peach whiskey barbecue sauce and shredded cheese, but I would’ve preferred a nacho cheese sauce. It is located near C’est Si Bon.

The brownie waffle stick by Waffle Chix finished third in the dessert category. This item will also be featured on Carnival Eats, and it’s very good, but I was hoping for a crispier texture on the waffle. It’s hard to tell where it ends and the brownie begins.

Hot Cheetos Taco by The Urban Taco Shop sounds great — Cheetos-crusted chicken with ghost pepper cheese, ranch and lettuce — but the chicken was overcooked and the flavor didn’t translate. However, The Urban Taco Shop has plenty of great things to offer at its Entertainment Plaza location.

The frozen hot chocolate was a miss from A Latte Love Coffeehouse. The mixture was impossible to drink through the straw, and the flavor combination tasted overwhelmingly artificial.