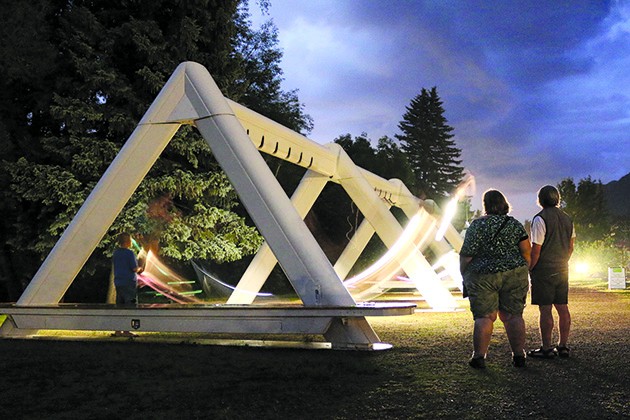 The Musical Swings: An Exercise in Musical Cooperation

Any parent can attest to the amazing advances in playground technology emerging since the ’70s when children endured steel slides the ambient temperature of a hibachi grill, rickety merry-go-rounds that inspired Lord of the Flies-level brutality and Spartan swing sets chipping lead paint. Now public parks are adorned with water pads, interactive labyrinths, climbing walls and plastic slides resistant to the blistering Oklahoma heat. Yet those sad, lonely swings have hardly evolved.

Oklahoma City Community Foundation (OCCF) teamed up with a Montreal-based art and design firm Daily tous les jours to give the tried and true playground icon a much-needed update during The Musical Swings: An Exercise in Musical Cooperation’s three-week stay opening on Friday at Bicentennial Park, 500 Couch Drive.

Created as a way to encourage musical cooperation in public spaces, each light-up swing is equipped with its own sound, either a piano, guitar, harp or vibraphone.

“The higher you swing, the higher the note,” said Daily tous les jours cofounder Melissa Mongiat. “When you swing in synchronicity with the people next to you, it triggers these hidden melodies. In public spaces, you tend to stay in your own bubble, but when making music, you are pulled out of the bubble. Together, people will try to trigger as much sound as possible, creating a conversation.”

Originally placed near Montreal’s opera house, The Musical Swings was an effort to break down the natural barriers people create between themselves and knit a tighter community.

“Collaboration helps strengthen the connection between strangers naturally,” Mongiat said. “With these types of large-scale installations, we work to bring people together to do things in unusual ways, using strategies for doing things together with different levels of engagement. You’ll have people performing, then people trying to master the swings and also people just listening and watching.”

The Musical Swings are being brought in by OCCF, a nonprofit organization that works with charitable organizations to help facilitate donations, according to OCCF director Jana Steelman. This will be a part of the foundation’s fiftieth anniversary.

“In addition to the aspect of giving the gift of public art to the community, The Musical Swings project is also a way to activate public spaces, bringing together people of all ages and backgrounds to convene in the city’s center,” Steelman wrote in an email to Oklahoma Gazette. “Through our Parks & Public Space Initiative, one of our goals is to encourage use of public parks and spaces throughout the community.”

In addition to The Musical Swings, OCCF joined with the City of Oklahoma City and OKC Riverfront Redevelopment Authority to begin planting approximately 800 trees along the Oklahoma River’s north shore walking trails. Steelman estimates that 250 trees were planted by mid-January, with the rest planted through the following months, and OCCF is now focused on the harder chore of keeping them alive through Oklahoma’s famously ill-tempered weather. The long-term plan also includes better public seating, better irrigation and the planting of native grasses and wildflowers.

Brian Dougherty is a program director with Parks & Public Spaces Initiative. He walked Gazette through the sparse trails back on a frigid February day. The beautification project is a long walk west of the bustling and energized Boathouse District. The area was once little more than fields of sandburs with a scenic view of Interstate 40’s concrete underbelly, and Dougherty is now overseeing the planting and support of 800 saplings that will transform the north shore into a destination for joggers, cyclists and families.

“We work to bring people together to do things in unusual ways.” — Melissa Mongiat tweet this

Because of the presence of buried utility lines and a nearby highway, Dougherty explained that the area can’t be developed for residential use, making it ideal for a public green space. He became intimately familiar with the unique challenges of the Oklahoma environment during his time as Agriculture Technologies’ division head of John E. Kirkpatrick Horticulture Center at Oklahoma State University-Oklahoma City (OSU-OKC). He also learned what thrived in the plains. When tackling the project of bringing the northwest shore of the Oklahoma River to life, he wanted to build something that would last for more than a few seasons. He wanted something that would thrive and transform while benefiting Oklahoma families for generations.

“How can I activate an area to give something back that will last for the next 50 or even the next 75 years?” Dougherty said. “We’ll still have ice storms and tornadoes, but how can I do the best to work hand in hand with Mother Nature?”

Since there is such a massive volume of saplings to care for through Oklahoma’s turbulent seasons, Dougherty said there was a specific focus on shade trees with a high degree of survival, including bur oak, chinkapin, bald cypress, cedar elm, Chinese pistache and red oak as well as less suburban-style grass that needs to be perfectly manicured to be inviting.

“There was a park study five years ago, and one of the things Oklahoma City was criticized on pretty heavily was we were mowing fence to fence,” Dougherty said. “The rule of thumb is to mow only 65 percent intensely; the rest you would let become habitat and pollinators. Let it look maintained, but that doesn’t mean it has to be 2-inch-tall mown grass.”

Less mowing means less maintenance, yielding a positive environmental impact while also lowering the cost to the city. New technology also allows for intensive monitoring of the city tree canopy, Dougherty said, which will track tree growth, age, health and even the spread of disease. He also envisions a future where shaded walking trails with various amenities like water fountains and bathrooms will eventually link all of the metro, transforming Oklahoma City and its suburbs into a truly pedestrian-friendly community.

There will also be a 6-acre circle at the end of the trail that will be turned into a natural habitat for Oklahoma wildflowers. It will take time for the project to come into full bloom, but OCCF president Nancy Anthony said there will be significant changes in the landscape as early as next spring.

“These are our gifts back to the community as we celebrate our anniversary,” Anthony said. “We’ve been giving grants for nonprofits with new ideas, having seminars and educational projects that are much more targeted, but The Musical Swings and the river trail that could be still thriving in 100 years are the two things that could impact everyone in the community.”