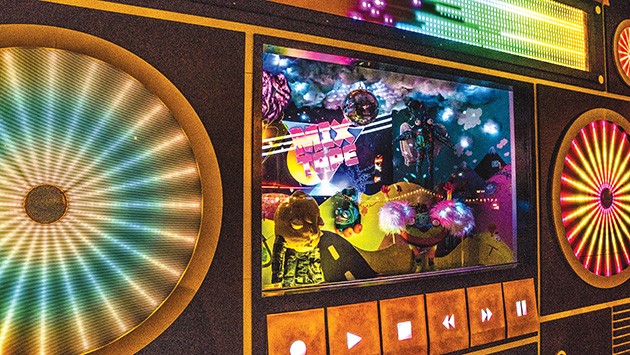 The Recording Industry Association of America recently reported that vinyl records are on track to outsell compact discs for the first time since 1986, but local artist collective Factory Obscura is still finding inspiration in cassette tapes.

Phase two of the collective’s interactive art installation Mix-Tape opens Saturday to annual pass holders and Sunday to the general public at 25 NW Ninth St., the space formerly occupied by The Flaming Lips’ The Womb.

Following Factory Obscura’s Shift and Beyond installations, phase one of Mix-Tape included a boom-box-inspired interactive shop window that allowed visitors to play short videos and initiate other surprises by pushing oversized versions of the buttons found on a tape player as well as The Flaming Lips’ musically enhanced light show King’s Mouth and a gift shop. Phase two expands the installation to about 6,000 square feet, nearly double the size of Beyond.

Without giving away too much about the new installation, Factory Obscura co-founder and director of strategic creativity Tammy Greenman said phase two elaborates on themes from phase one.

“I can tell you that it is the physical manifestation of what we as a collective would put onto our mix-tape,” Greenman said. “We conceptualized this as an audio autobiography to the city, state and world about who we are as Factory Obscura. We all talked about what songs we would put on a mix-tape and why, and then we took the emotions that those songs evoked and the kind of immersive feeling that those songs evoked, and we kind of broke that tape open, and it spilled out into the space. And that’s what you will experience when you come here. It won’t be a literal translation. You won’t hear literal songs … but it will take you through the emotional journey of a mix-tape. … As we were developing this concept, we developed six overarching emotions, which we will explore fully, from the surface to the depths of those emotions … joy, angst, hope, wonder, love and melancholy. You’ll experience the full depth of those emotions as you come through the space.”

“Just stay open,” Karper said. “That’s one of our hopes when people come to our experiences, that it allows them to sort of retreat from the everyday, typical experience of the world and to come in a place that is safe and designed for you to have that escape and to open up to new kinds of experiences. So even though you don’t really know what to expect, that is part of the experience in itself, just being open to whatever might happen.”

Greenman added that even visitors to one of Factory Obscura’s previous installations would probably be surprised by what they might encounter in Mix-Tape.

“We’ve added a lot of new layers, and we want to encourage people to try something new and be a little bit more adventurous with how you interact with the space,” Greenman said. “But, still, be gentle because it is art.”

Factory Obscura’s installations combine elements of a museum and a fun house, but Karper said visitors typically figure out how to respectfully interact with the art.

“We have found that our participants are pretty good about that,” Karper said. “Sometimes you have to remind little participants to be a little bit more gentle, but for the most part, people get it. They’re beautiful and stunning pieces that are creating the full experience, and so I think people get that you can’t really be super harsh with it. But we want people to touch stuff and interact with it and sit down and lay down and crawl and climb.”

“We’ve been working with them since we started in 2017,” Greenman said. “It started out as a pretty informal kind of friendship, where we would ask them questions and they would give us advice, but as we have gotten to know each other and spend more time together, our relationship has developed into more of a formal partnership, and so we were able to collaborate on an actual piece now that will be at Mix-Tape. Part of it is at Mix-Tape, and part of it is at the House of Eternal Return in Santa Fe.”

Visitors to both installations, though separated by hundreds of miles, will have an opportunity to communicate with each other in real time.

“We’ve been collaborating with them, and there was this sort of, like, powerful force that was created through the act of our collaboration, and it caused an opening in time and space to form,” Karper said. “Now there is this connection between Oklahoma City and Santa Fe as a result.”

Greenman agreed the partnership between the two collectives is magical. Fostering creation through collaboration has been part of Factory Obscura’s mission from the beginning and will continue to be a guiding principle as the collective moves closer to its ultimate goal of opening a 40-60,000 square-foot space to house larger installations and an arts education program.

“We do truly believe the future is collaborative, and we do believe that working together creates an even bigger and better experience,” Greenman said. “We believe that not only in art but in the world at large, and we’d like to encourage folks to seek ways to collaborate in their own life.”