It’s not a true campfire until someone breaks out the marshmallows for open roasting. Is there a food that promotes more intense sense memory than a gooey s’more? 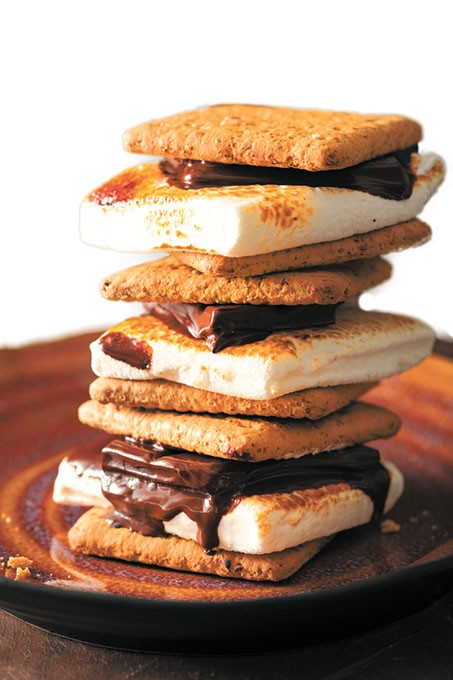 As the temperatures cool down, the act of sitting around a bonfire becomes one of fall’s most beloved memories. It’s not a true campfire until someone breaks out the marshmallows for open roasting. Is there a food that promotes more intense sense memory than a gooey s’more?

The origins of the s’more are somewhat mysterious. Adventure Journal’s Brendan Leonard tracked the first mention of “some mores” to the 1927 Girl Scout cookbook Tramping and Trailing with the Girl Scouts.

Leonard notes that the combination of chocolate, marshmallow and graham crackers predates the recipe, first with Nabisco’s Mallomar in 1913 and later Southern staple MoonPie in 1917.

National Geographic traces the progenitors of the s’more to Victorian “sandwich cookies” filled with jam, lemon curd or cream.

The marshmallow itself is an ancient treat that comes from the mallow plant and is traced to ancient Egypt. The French modernized it in the 19th century and turned it into the sweet meringue that we recognize today.

A s’more tart is available at Viceroy by request, Novak said. A graham cracker tart shell is filled with chocolate ganache and topped with a house-made marshmallow that is caramelized with a torch to give it the campfire essence.

“It’s great and classic with the nice tartness of the raspberry cutting though everything else,” Stranger said.

He takes it up a notch with sauce made with brown sugar, butter, heavy cream and Maldon salt. He drizzles the s’more with the sauce and serves it with brown butter ice cream.

“It’s the ultimate s’more sundae that brings a smile to everyone’s face,” he said.

Get your marshmallow nice and toasty over the fire. Stranger does this in an outdoor fire pit or just a fireplace if it’s too cold. Sandwich two marshmallows per s’more and Bedré chocolate between two graham crackers.

Melt the butter over medium heat and then add the brown sugar. Once the brown sugar is fully incorporated into the butter, add the heavy cream and salt. Salt it as much as or as little as you like.

En Croûte places the aforementioned s’more onto a plate and tops it with a scoop of En Croûte’s brown butter ice cream.