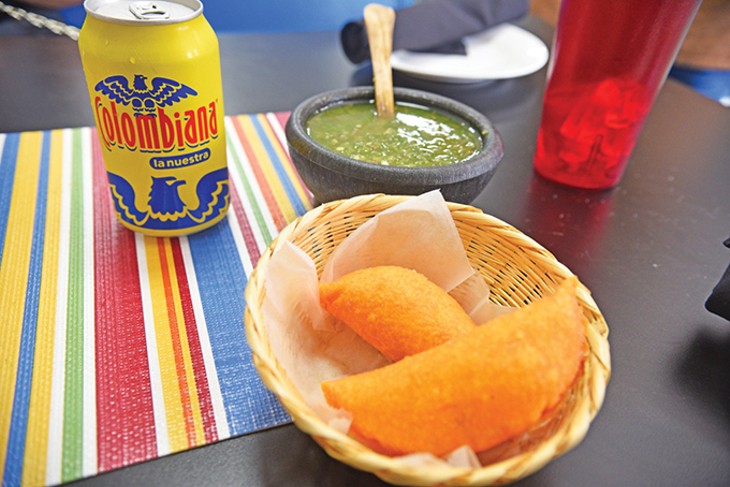 Edgar Devia moved to Oklahoma City 20 years ago from Bogotá, Colombia, in search of a better life for his family. As Devia worked at Mango’s Discotec, he began serving Colombian food on the side, and it became a hit with customers and gave him the confidence in his cooking abilities.

He earned a reputation for serving unique empanadas, arepas and large platters of meat with plantains and rice.

Slowly but surely, he earned enough money to bring his family from Colombia to the United States and eventually opened his own restaurant, El Fogón de Edgar, at a W. 23rd Street location at the beginning of the decade.

“The parking in the [23rd Street location] wasn’t great, and it was only about 10 tables, said Edgar’s daughter Lusia Devia. “Even the location in general is much higher traffic, and it’s been great for business.”

The location on the southside of Oklahoma City puts the restaurant closer to the area’s highest concentration of Colombian ex-pats, who live in Norman and Moore, Lusia Devia said.

Guests are greeted with a large and colorful Colombian flag on the back wall, and if they turn to the right, they’ll see a large chalkboard filled with messages from customers in Spanish and English declaring their love for the food and each other. A note in the far right corner of the board commemorates a couple that got engaged while in the restaurant.

“For us, the food is important, but it’s important to showcase our family and our faith,” said Grace Rodriguez, who is Edgar’s daughter-in-law and whose husband Diego works in the kitchen alongside his father. “God is very important. Faith, love and family. When people come here, they feel the family and part of our family.”

Rodriguez moved to Oklahoma City this year after being separated from her husband for over a year. With a background in marketing in Colombia, she’s working to grow the reach of El Fogón by establishing a new coffee service in the corner of the restaurant. She wants El Fogón branded coffee to be on store shelves across the metro area.

“Colombia is known for having the best coffee,” she said, noting that the restaurant plans to add breakfast service in the future.

“In Colombia, it is interesting because men are traditionally the family chefs, not only the women,” Rodriguez said. “My father in law, my husband and brothers — all of them cook very well. They didn’t go to culinary school; it is home-style recipes and it is amazing. From generation to generation, this is our story.”

Both Rodriguez and Luisa Devia said that U.S.-born customers are often surprised to find that Colombian food isn’t as spicy as they might expect. The staff prepares family recipes from capital city Bogotá high in the Andes Mountains. There is an emphasis on meat and potatoes, particularly in their empanadas, which are eaten morning and night.

The empanada dough is deep-fried — the texture is much thinner than other South American varieties — and receives a boost of flavor and color from saffron. The empanadas are served with an aji hot sauce. The bright green sauce is a sweet, vinegary and herbaceous mixture as a hot pepper is joined with loads of fresh parsley and cilantro.

The bandeja paisa ($15.50) is the restaurant’s most popular entrée. A huge portion of the customers’ choice of grilled meat is joined with chicharron, rice, beans, traditional Colombian sausage, sweet plantains, a fried egg and an arepa (a small meat-filled sandwich made with cornmeal).

Along with the empanadas, arepas — also popular in Venezuela — are one of Colombia’s most popular dishes, as the country’s academy of gastronomy estimates there are 75 distinct types of arepas preparation in the country. El Fogón prepares nine varieties ($2.75-$6.99) ranging from a simple arepa with butter to one stuffed with shredded beef, chicken, shrimp, ham and cheese.

On the weekends, El Fogón serves Bogotá’s most popular export: ajiaco ($11.75), a stew made with chicken, two types of potato and corn served with rice and avocado.