Family-friendly cycling group is about more than just riding

As the traffic light turns red, cars traveling along Classen Boulevard come to a stop.

A cyclist leisurely rides past the stopped motorists as they stare, followed by another and another and then a large group of cyclists.

This is Kidical Mass, a local group that hopes to promote bike-friendly city streets and raise awareness of cycling as an activity for families and children.

“It’s about teaching people how to ride a bike in the city and showing other people that there are families on bikes, that this is a real thing,” said Tom Peryam, Oklahoma City Kidical Mass organizer. “A lot of people kind of rule out [cycling] when they have kids because they think it’s too dangerous.” 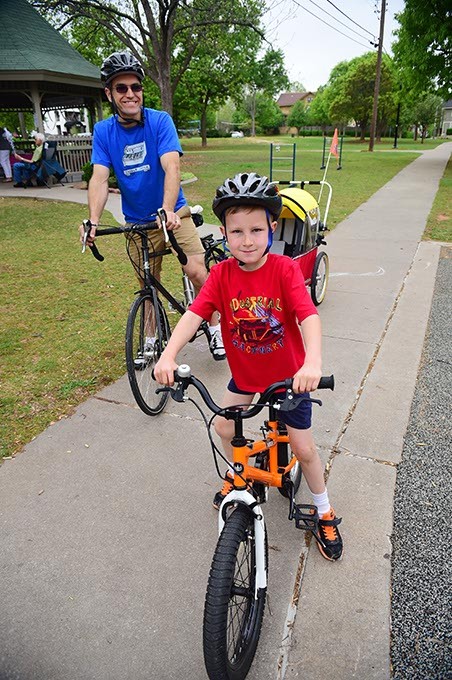 Playing off the cycling term “critical mass,” it launched in 2008 in Oregon and has since grown to include over 50 cities across the country. Each group has its own goals.

In Oklahoma City, which consistently ranks low for cycling infrastructure and riders, Peryam said he wanted his group to have fun while raising awareness.

“This is to show people that in this city, you can get around on a bike,” he said. “It increases the visibility of people on bikes and makes motorists more aware that we are out there.”

“It seems we are finally starting to get to that point [where demand is growing] and the city is taking notice of it,” Harding said.

Beyond the Kidical Mass ride, Harding sometimes cycles to work and to drop his daughter off at school.

“There are some places [in the city] that have a bike lane,” he said. “But then there isn’t one and you kind of get stuck in the middle [of the road].”

Kidical Mass rides are often short and offer some type of treat reward at the end.

A recent one went from Mesta Park to the Plaza District, ending with visits to Roxy’s Ice Cream Social and Pie Junkie.

Peryam said outings aren’t competitive and the group stays together, meaning that if one person stops, everyone stops. Also, riding groups have continued in size and popularity.

“We just started this in September to see what would happen,” Peryam said. “This just seemed like something Oklahoma City was ripe for.”