Oklahoma City’s beloved New Zealander releases a memoir about his unlikely ascension from the farms of Rotorua to the NBA Playoffs. 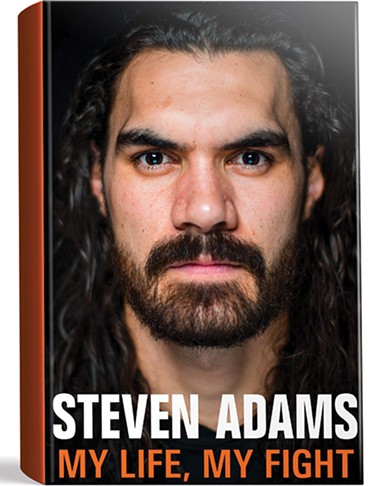 If Steven Adams can be neatly distilled into just five seconds, then it would absolutely start at the 5:47 mark in the fourth quarter of an Oklahoma City Thunder home game against the Toronto Raptors on December 27, 2017. Coming off a pick and roll, Russell Westbrook passed to the hard-charging, seven-foot Kiwi wrecking machine who promptly bowled through the wilting defense.

Adams jogged back on defense and, realizing he had landed a plush spot on every Top Plays montage of the night, celebrated by pumping both hands in three-fingered salutes which indicated either he was Ready to Rock or was saying “I Love You” in American Sign Language. Either option seemed equally plausible and ridiculous.

What makes this play such a defining moment for the New Zealander is that it demonstrated his monstrous athleticism, aggression and power but also the enduring awkwardness of a shaggy-haired accidental superstar who only turned to professional basketball when his dreams of farming seemed a bit out of reach.

And, yes, I’m also suspicious of these salt-of-the-earth claims from professional athletes, but a reading of his recently released memoir made it abundantly clear that basketball greatness wasn’t anywhere on Adams’ radar during his formative years until fate intervened.

When I heard Adams was releasing a memoir, I immediately imagined an NBA origins story featuring an amiable, somewhat hapless hero who might look like Jason Momoa (Aquaman, Game of Thrones) but is voiced by Taika Waititi (Boy, What We Do in the Shadows and Thor: Ragnarok).

And not without reason because flashes of that humor consistently pop up in media interviews and was featured prominently in his 100 percent gold series of YouTube videos with fellow Stache Brother (now New York Knickerbocker) Enes Kanter. That’s what I wanted from the book, the story of a silly giant beloved by all aside from his NBA adversaries who have roundly agreed that Adams has a very punchable face — or kickable crotch if you are Draymond Green.

Then I saw the cover of My Life, My Fight and knew that’s not what I was going to get. It is instead a classic NBA product that was buffed to a sheen and, aside from a handful of fairly innocuous expletives, written for all ages. It’s a sanitized and easy-to-read fan’s memoir.

These autobiographies of a sportsman’s life are a classically difficult genre to review because they don’t lend themselves to high writing or risky storytelling. All the good bits from the athlete’s life have already been mined to exhaustion by sportswriters and commentators, so what we are often left is a retelling from the athlete’s perspective who, in many cases, isn’t thoroughly convinced that their story is all that interesting.

But we the readers insist it must be fascinating to perform at a high level, right? They must know a secret that allows them to maximize their potential while we very much don’t.

I’m reminded of a revelatory essay by David Foster Wallace titled “How Tracy Austin Broke My Heart.” Wallace breaks down the common failure of memoirs from successful athletes and why they are often pale reflections.

When Adams recounts being punched, elbowed and kicked in the groin, he dismisses it as being a part of the game, probably not intentional­ — and who cares?! Because it’s in the past. tweet this

“It may well be that we spectators, who are not divinely gifted as athletes, are the only ones able truly to see, articulate and animate the experience of the gift we are denied,” Wallace wrote. “And that those who receive and act out the gift of athletic genius must, perforce, be blind and dumb about it — and not because blindness and dumbness are the price of the gift, but because they are its essence.”

In short, asking a talented athlete why they are great won’t yield worthwhile answers because they are great because they don’t waste time questioning their greatness. They simply activate it. Wallace remembers his competitive tennis days as he tortured himself before important serves, running through the legion of what-ifs. Austin, on the other hand, didn’t consider what-ifs. She just served the ball the same way she’d practiced 10,000 times before.

But Adams’ memoir is worthwhile because there is something else going on — an urgency. Adams, unlike many other athletes trying their hands at memoirs, knows exactly why he’s telling his story. He wants to wrangle the legends surrounding his untraditional journey to the NBA and, specifically, settle the history of his beloved father, a British sailor who fathered something north of 14 children after first making landfall in New Zealand. Adams had been rumored to be homeless and a gang member following his father’s death when Adams was only 12, but he wants us to know that his family never abandoned him. They instead pushed him into basketball to save him from his depression, a depression that Adams only briefly discusses even though it was clearly significant.

Adams is not the sort who wants to think through his emotions. His family knew he needed something to excel at. Basketball seemed like the best bet, even if he didn’t really care much for the sport.

And he still doesn’t. Not really. He admits to rarely watching basketball unless he’s playing in the game. He just likes working hard, taking it one play at a time, representing his team that is like his family and all those other sports clichés that still ring true in this context.

My Life, My Fight was co-authored by Madeleine Chapman, a fellow alumni of the Kenny McFadden Basketball camps in Wellington, New Zealand, that turned Adams from a lanky and uncoordinated farm kid to a gifted college prospect. She avoided forcing a heavier style on the book to allow Adams’ story to stand on its own. There is no delightful absurdity of the Stache Brothers era, no ground broken on the deep philosophy of the motion offense or the role of a true center in a modern game moving further and further away from traditional post play. It’s just a simple story from a gifted athlete who somehow still believes Draymond Green didn’t intentionally kick him in the groin during Game 3 of the 2016 Thunder/Warriors series — which, of course, Draymond Green totally did.