Ciara Brooke and Brody Farrow go together like peanut butter and jelly, milk and cookies, macaroni and cheese. As a two-person brother/sister band, they are snack-size compared to some music groups, but for a new project rooted in sibling camaraderie, there is no need for a third ingredient.


"You'd think we were twins," said Brooke, who is five and a half years older than Farrow. "I'd say we share 90 percent of the same personality traits, strengths, and flaws. That could be a disaster from a compatibility standpoint. However, we are both really good at observing how the other person is feeling and then complementing that."


Five Year Gap is a powerful combo in pop-rock. Brooke plays keys and guitar, sings, writes most of the lyrics and melodies, and handles some production. Farrow also produces, plays drums, runs Ableton Live on stage, and contributes guitar in the studio. Their creative chemistry is evidenced by how naturally cohesive their debut music sounds. 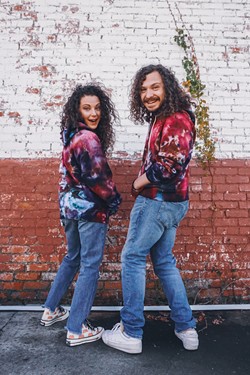 Recorded at Cardinal Song and released March 4, the band's self-titled EP is a tribute to adolescence and the sanctuary that can be found in another person. While the six original songs draw from Brooke and Farrow's history as best-friend siblings, they speak to broader interpersonal dynamics between friends and family. Whether bonding in shared memories or seeking refuge from the less welcoming parts of life, having someone to share in the experience is cause for celebration. Not everyone has such a companion, but music can often be the next best alternative to being understood.


"We have a heart for kids and adults alike whoever feel like they don't belong or have a place in this world," the band said. "We want to make music for them, music that helps them feel less alone and gives them hope."


The songs on Five Year Gap deal with topics ranging from the plight of not fitting in to the pressure that comes with getting older. Not every story gets a happy ending. Lead single "Chalk Houses", for example, reminisces fondly on a playtime childhood friendship that drifts apart in later years. However, the siblings find silver linings in these themes of adolescent insecurity, prevailing on the strength of each other, and this is not merely a source of topicality for the band's songwriting. It is in the DNA of the band's shared creative mindset.


"I'm not sure where my insecurities come from. They've just always been there," said Farrow. "I struggle a lot with comparing myself to other musicians, and at its worst, I feel like I'm lying when I say 'I'm a drummer' or 'I play guitar'...Thankfully, I know Ciara feels the same way."


"For me, I've always been an entertainer and performer, and with that comes a lot of perfectionism and people-pleasing," said Brooke. "I also felt like an outcast growing up because I wasn't into sports or 'normal' teen things like so many of my classmates and friends were. I was into dance and music and a bit anti-social, reading a book during lunch while my friends chatted around me."


The two are from Tonkawa, a small town of about 3,000 people in northern Oklahoma, and that has heavily shaped Five Year Gap.


"Growing up, we had a lot of freedom to just be kids," said Brooke. "Lots of summers riding bikes every day around town from sunup to sundown. Knowing everyone in your high school — not just your grade, but literally the entire school."


Five Year Gap reflects this background in not just the new EP but its visual presentation as well. The duo has released four music videos in the past year. While the newest one was shot at Tonkawa's The Hub, a swanky entertainment complex connected to the town's nearby hotel and casino, the other three visuals favor more relaxed open spaces and blue skies. It is a fine pairing with the band's tie-dye aesthetic.


"We both like color and wanted to shy away from the all-black look that a lot of bands have," said Brooke. "We both had some tie-dye pieces in our closets already, so it was just an easy way to get started without completely changing our wardrobe. I also had recently found a woman on Instagram, @rosiemoonapparel, who makes custom ice-dyed clothing out of her home in Long Beach, California. I fell in love with her pieces almost immediately, and her stuff was a great way for us to get matching pieces."


Brooke and Farrow have long been a pair in music, even when it wasn't obvious to the public. If the name Ciara Brooke sounds familiar, it is because she has spent the last four years forging a solo pop music career. While her brother only filled in on drums at first, he gradually became a more integral part of the creative process. Five Year Gap is a natural evolution of what the Ciara Brooke solo project was becoming — an Oklahoma rock band.


"I used to think that I couldn't be successful as an artist in Oklahoma because I wasn't country. So wrong," said Brooke. "The OK music scene, especially in OKC, is actually pretty diverse, and now that we are Five Year Gap, I feel like we are breaking out into the scene more and more."


"I used to think I would have to leave Oklahoma to be successful in the music industry, but I don't think that's the case anymore," said Farrow. "Oklahoma's my home, and people here have already been so receptive to the singles we've released as a band, so I can't wait to share the full EP with everyone."


Five Year Gap will play the new EP in its entirety at its upcoming release show March 18 at 51st St. Speakeasy with support from One Two Ten and Shed Club. Admission is $5, and the venue is 21 and older. That age requirement, though, doesn't necessarily apply to the proverbial inner child.

To quote the EP's opening track, "Karate": "Let's never grow up, at least not on the inside."