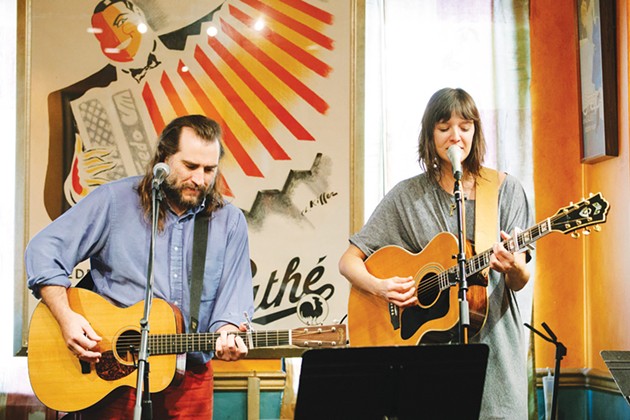 Why aren’t you famous? It’s a good question. Perhaps you’ve been asked before, or maybe you’ve asked another. It’s possible you’ve even asked yourself. In reality, few will attain such recognition. The elusive nature of fame is what defines it, branding it as an eternally coveted achievement, exclusive to the distinguished and reserved only for those deemed worthy of its illustrious status.

The reason some of us are not yet famous isn’t so simple, and that’s why Andrew Grimm and ellen cherry have devoted an entire podcast to tackling the seemingly inexplicable concept of fame and why they and others like them haven’t quite made the cut.

For roughly two decades, Grimm and cherry have worked as gigging musicians, dedicating themselves to their passion, the art of music. So why haven’t you seen their faces on the cover of the latest Rolling Stone?

Despite years of hard work and international tours, neither has topped the charts, released a best-selling album or delivered a sold-out performance at Madison Square Garden.

And you might be surprised to learn that it’s not for a lack of talent. After all, people like them. They have listeners who attend their shows and buy their albums, genuine fans who support their work and come back wanting more.

The bottom line is fame was never their objective.

Both Grimm and cherry recall moments after shows in which fans would ask why they weren’t famous. Their responses give the impression of two individuals for whom the notion of stardom is merely an intruding abstraction held light-years away from their conscious thought.

“When somebody says, ‘Why aren’t you famous?’ you think, ‘Well, fame isn’t really my goal. My goal is to try to create something really beautiful and meaningful or express myself,’” cherry said. “The idea of it may sound really appealing but … I wanna know if I can write a line that rhymes and if I can express myself in metaphor, and that came to be a more interesting and, to me, worthy goal.”

cherry met Grimm in 2004 in what she describes as a “cosmic meeting.” In need of an opener for his upcoming show, Grimm feverishly scrolled through lists of local musicians hoping for the right fit. On Baltimorebands.com, he could see pictures of cherry along with descriptions and press reviews covering her work.

“How bad could it be?” he asked himself.

Not bad at all. The two discovered a near instantaneous connection to one another through music, a connection they describe as fueling their growth as musicians to this day.

“It’s an honor, always, to be asked to play somebody’s show sight unseen,” cherry said of their initial meeting. “Frankly, it’s really wonderful and I’m very happy that we met.”

Like cherry, the concept of fame seemed to elude Grimm.

“We just thought it was a silly concept and decided to try to explore what [fame] means for an independent musician that is on a very low tier,” he said.

So they created a podcast exploring the different facets of fame while pulling back the curtain on life as independent musicians, including a look into booking a tour and landing gigs without the employment of agents who know the business. It’s not uncommon for them to express the frustration that comes with unresponsiveness and rejection, either.

“We thought there’s gotta be a way to make our voice heard because you just start to feel invisible after a while,” cherry admitted. “And so part of the hope of the podcast is that people who are struggling with that feeling of invisibility don’t give up.”

“It’s a war of attrition. All you gotta do is hang in there,” Grimm said.

Using their podcast as a platform for other artists, each episode in the first season would feature a song by a musician they had met on the road in an effort to help increase their audience. Episodes would also feature Grimm and cherry reading aloud a personal essay focusing on the meaning and economy of fame. Though the essays were written beforehand, their reactions were not. Twenty-one of the 24 episodes in the first season were centered on a pre-planned theme, yet the show remains largely unscripted.

“It was a space for us to do something different, to kind of push our limits on how we write and what we write about,” Grimm said.

The second and current season features musicians with whom cherry and Grimm have become acquainted or, as cherry puts it, are “comrades in arms in the fight to continue to make art important in [their] culture.”

For season two, friends who are invited on to the show select a topic they would like to discuss. Grimm, cherry and their guests each write a song over the topic and perform the number while on the air. It’s risky, but Grimm said all songs have been great thus far.

“A rising tide will lift all these boats; that’s really one of the hopes of this podcast and of our continued work individually and together, that if we can raise the bar and also raise that tide and bring other people with us, that’s an amazing thing,” cherry said. “It feels good to do that, and I think it shows people that songwriting is important and storytelling is important and supporting those people that make that work is important.”

But that doesn’t mean they’re putting the brakes on their own schedule. Saturday at 6 p.m., the Baltimore-based pair will make a stop at Joe’s Addiction, 1806 SE 59th St., in Oklahoma City as part of their tour.

Over the years, both Grimm and cherry have dealt with their fair share of trials and tribulations. In an evening filled with music and storytelling, they hope to hone in on the sentimental subject of empathy while delving into more personal and existential anecdotes.

“Seeing somebody not for what might afflict them but for them being themselves,” Grimm said, is a message he believes is worth spreading.

Since their last visit, they befriended the coffee shop’s owners and have looked forward to coming back to put on another show for their audience.

“I am really looking forward to going back to Oklahoma City, to be in that neighborhood and be in that community of people again, because it was such a great feeling last time,” cherry said. “And just to be there, I feel like we build these pockets of friendships as we tour.”

“The majority of people that I have met on the road have been warm, kind, caring, giving people, and Oklahoma City was no exception,” Grimm said.

Why Aren’t You Famous?