Fantasy action flick Gods of Egypt is a giant mess 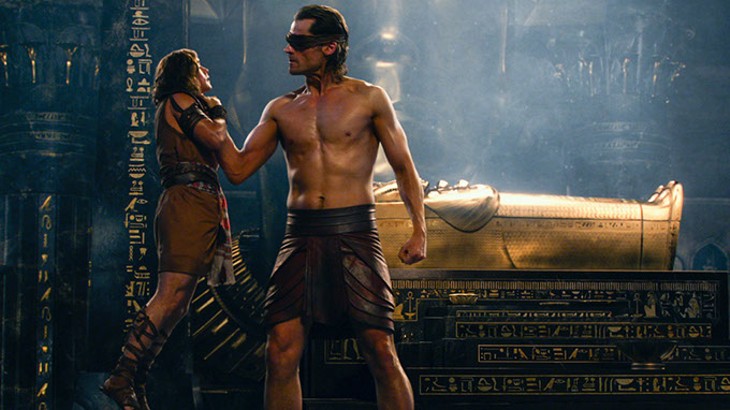 There’s a myth written by an ancient Greek and passed down through a legacy of Hollywood filmmaking that the Egyptian pyramids were built by slaves when they were actually built by respected craftsmen. Those who worked on Gods of Egypt, although I’m sure they are all respected professionals, would likely rather claim that they were forced into its creation.

Ancient Egypt, apparently “before history began” — whatever that means — serves as the setting for this fable. Gods are very real and very white and lord over the Egyptians with their great height and power. They also bleed gold, which I bet many of us suspected about the ruling class. All of this is told by voice-over while we lurch through an indiscernible museum of artifacts. We’re led to believe this voice belongs to an older version of the thick-browed and thick-witted thief Bek (a wooden Brenton Thwaites). I’m guessing they got an older actor to read the voice-over because Thwaites doesn’t seem particularly adept at speaking, though he has mastered the art of looking like a heartthrob while jumping and rolling.

Bek steals to provide a better life for his wife/girlfriend/love Zaya (Courtney Eaton in her second feature, doing her best with nothing) until their lives are interrupted by the coronation of new god-king Horus (Game of Thrones’ Nikolaj Coster-Waldau getting a paycheck). Things don’t go smoothly, and Horus’ uncle Set (a wild-eyed Gerard Butler, who is only one year older than Coster-Waldau) violently usurps the throne and plucks out Horus’ eyes, which come out like Lego pieces rather than having bloody optic nerve tails. What follows are about 12 different plotlines that all serve to bring us closer to the credits. 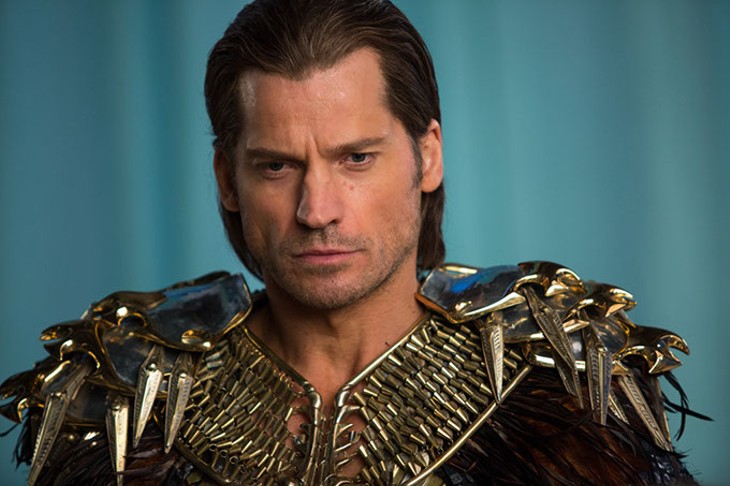 At its core, the film serves as an unplayable video game. Lines of dialogue thrust us from one stagnant venue to the next, devising situations for the camera to swivel around. If well-done CGI can help create amazing vistas and blend reality and magic, like in Mad Max: Fury Road, then Gods of Egypt-level CGI looks like the demo animations playing on an arcade machine before you put your quarters in. It’s blurry and rubbery, tired of the ballooning spectacles required to attract its audience.

The poor actors, half of whom are giant gods trying to interact with the Lilliputian Egyptians, try their best to get anything out of their roles. Why, you might ask, are they all giant? It seems like an unnecessary attribute separating them from mortals, considering the gods can morph into metallic action figures (many complete with battle-ready expanding wings) at any moment. Bek can’t do that, although he succeeds at everything else without effort, including fighting many gods. Is he a demi-god? No; he’s just a protagonist.

The effort it takes to sit through this movie strains the eyes, the intellect and the attention span. The film will flop, even in countries that won’t recognize the kaleidoscope of accents on display by the family of gods. But what does “flop” mean in the world of film? Though the film’s budget was $140 million, the studio’s financial exposure was under $10 million because the Australian government’s tax credit covered 46 percent, with the rest made up by selling the film speculatively to foreign markets. Will it recoup the $10 million? Probably. Was it worth the jobs it created in Australia? The pyramids created lots of jobs, but they also had better management.