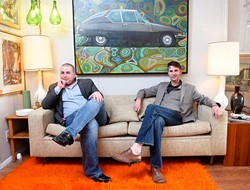 The Walk This Way Fashion Show “One Swanky Party” is sure to impress Oklahoma City’s art lovers, especially those who appreciate wearable art.

Since David Rackley became board president of Other Options Inc., each year’s show has been entirely different from the last. Even the venue changes; this year, it’s at OKC Farmers Public Market, 311 S. Klein Ave.

Rackley said the party’s theme and the runway is reminiscent of a 1950s backyard barbecue. The models are essentially integrated into the crowd, creating an interactive environment.

The food draws inspiration from midcentury American cocktail party hors d’oeuvres like fondue, but with a gourmet twist.

Although this is his first go-around with a fashion show, as a regular headliner at The Boom, Johnson is no rookie when it comes to putting on fantastic shows in grand costumes.

Johnson stepped into the world of fashion design sort of by accident. He began by sewing his own costumes for his performances. His designs were so stunning that other performers wanted to have Johnson make their costumes, too.

“My grandmother sewed,” Johnson said. “My sewing skills have picked up in the last year.”

Soon after, he was invited to showcase his work on the coveted runway.

“I told myself, ‘You never know what opportunities will come if you do this,’” he said.

He spends many hours daily fine-tuning his collections with just two serger machines. His creativity keeps him busy with new designs.

“I go to the fabric store every other day just to find new fabric,” Johnson said.

His collection in Walk This Way includes variations of kilts. Each piece exudes classic structure and conceptual vibes but are made with unusual fabrics and prints. Johnson said the 1950s era is a big point of inspiration but claimed there is no true theme in his designs.

Walk This Way also honors the late Brian Palmer, a local artist who inspired the event’s overall theme. His well-known artwork will be displayed over the fireplace. Jeffrey Hammons, a dear friend of Palmer, pays tribute through his designs, which are over-the-top, wearable versions of Palmer’s creations.

Other Options, Inc. is a local nonprofit that provides food, resources, services and education to those at risk of or affected by HIV and AIDS and their families.

Print headline: Fancy fun, Clothing designers lend their threads to a local fashion show with a cause.