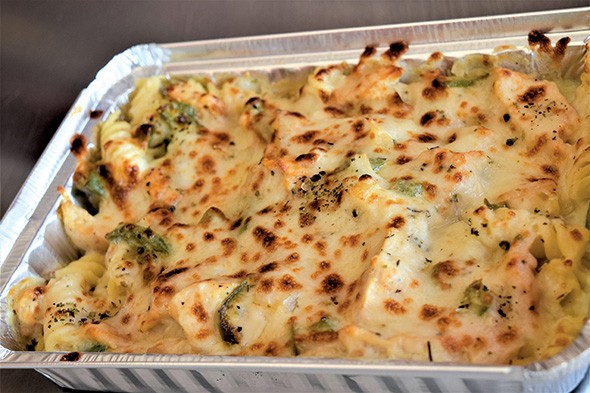 With extensive experience in fast food and fast-casual concepts both here in the United States and the Middle East, entrepreneur Bassam Saleh moved to Oklahoma City about a year ago and immediately began surveying the city to look for a void in the restaurant market.

While going through school in the U.S., Saleh started out delivering pizza for Domino’s, worked for Godfather’s Pizza in many different aspects and eventually became a restaurant general manager in the Kansas City area with over 60 restaurants under his leadership. Then Saleh returned to his native Kuwait, where he continued to strengthen his restaurant experience.

“From the day I graduated to now, I’ve worked in a lot of restaurants. I started from the bottom; I’ve done everything,” Saleh said.

He followed his sister Heyam to Oklahoma City about a year ago and began to look for a restaurant opportunity.

“I looked around and saw that burgers are everywhere. Same with pizza and chicken. The only thing missing here is pasta,” Saleh said.

Saleh opened Pasta 2 Go in a former barbershop converted into a kitchen at 7755 W. Hefner Road in April, with a focus on takeout pasta. Saleh is helped in the kitchen by his two sons Shadi and Omar and wife Lina, who makes sauces fresh each day.

The numeral “2” was included in the name because originally, they offered two pasta dishes for the price of one, but have had to refocus their business model with an eye toward profitability. They now offer two pasta dishes for $10 every Tuesday. Saleh said that he hopes to bring back the two-for-one deal before the end of the year.

“We’ve improved our sales,” Saleh said. “It’s going to take time. For any business, you have to wait for a year. The reaction I’ve gotten from people is that they like the food and the portions are good. The prices are good. It’s just a matter of time.”

“I looked around and saw that burgers are everywhere. Same with pizza and chicken. The only thing missing here is pasta.” — Bassam Saleh tweet this

Pasta 2 Go’s most popular dishes are the classics: chicken Alfredo ($7.99), spaghetti with meatballs ($7.99) and lasagna ($7.99). Spaghetti or Alfredo are offered in baked or stovetop preparations, as the pasta finishes cooking in the sauce.

Saleh said that when customers come into the store for the first time, they tend to stick to what they know but are more willing to explore the menu upon subsequent trips. Combinations like the prawn and mushroom spaghetti ($8.99) and spicy chicken ($6.99) that pairs red sauce, choice of pasta, chicken and Thai chili and Gambretti, a dish with red sauce, cream, choice of pasta with shrimp, oregano, artichoke and black pepper ($8.99), have been some of the most popular nontraditional items on the menu. 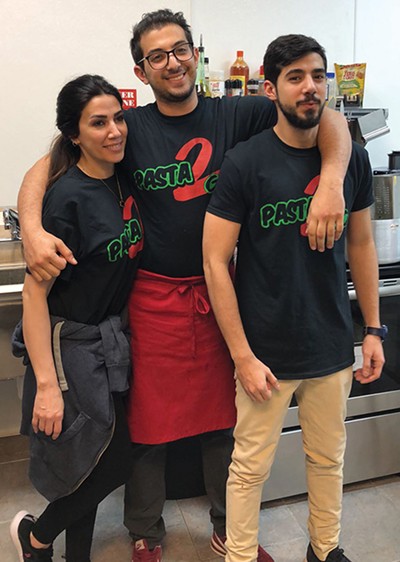 Pasta 2 Go also has a few sandwiches in the menu, including a gyro, two grilled chicken sandwiches and a meatball, but its main focus is pasta.

“If you sell chicken like KFC, I’ll buy chicken from you, but if they start selling pasta or pizza, I won’t,” Saleh said. “If you are an expert in one field, stick with it. That’s what I try to do. I know you can go to Domino’s or Pizza Hut and get a lasagna or simple pasta. Here, we have  more than 20  options. I’m trying to add more and more to the menu.”

A build-your-own pasta option expands choices on the menu by allowing customers to choose from three pasta types (fusilli, penne and linguine) three toppings and sauces that include marinara, Alfredo and pink (a mixture of the two). The country bake pasta with chicken, bell peppers, sauce and cheese with the addition of jalapeños became such a popular build-your-own option that it will be added to the menu full-time.

At an affordable price, Pasta 2 Go doesn’t use fresh pasta made in-house in order to focus on consistency.

“I don’t want to mess with making our own,” Saleh said. “I can do it, but I run the risk one day won’t be as good as another and then I might run out.”

Unfortunately, meatballs are not freshly made, which is the tradeoff for an affordable price, but all of Pasta 2 Go’s sauces are prepared by its all-in-the-family staff.

“It’s a unique concept, and we’re completely a family-owned business,” Saleh said. “It’s fun to work with my wife and sons. I like Oklahoma a lot. I’ve lived in a lot of other states, and I think this is the best place for a family.”

Saleh has many future plans for Pasta 2 Go, including adding to its dessert and appetizer menu, while also wanting to add a family meal that would have multiple containers to try different types of pasta. He also has his eyes set on another location called Pizza 2 Go, which he will focus on in 2019.

Pasta 2 Go delivers within a two-mile radius but also has delivery options through mobile apps like GrubHub and Postmates.