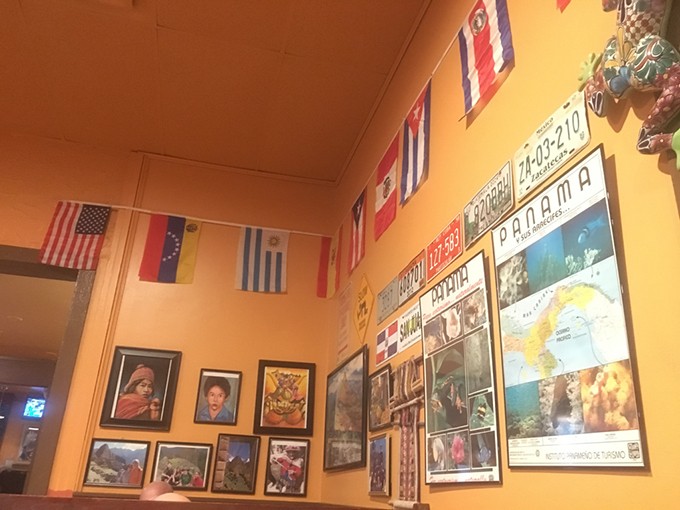 Around 100,000 contract Chinese workers migrated to Peru in the second half of the 19th century following the country’s outlaw of slavery. They arrived to find a de facto slavery environment, but the influx of immigrants left an indelible impact on Peruvian culture.

A large majority of immigrants arrived from the southern province of Guangdong and infused Cantonese elements into native Peruvian food, which is now referred to as chifa.

Chief among the fusion cuisine in Peruvian culture is the dish lomo saltado, which marinates strips of steak in soy sauce and red wine; stir-fries it with onions, tomatoes and french fries; and serves it with rice.

It’s the first dish Jorge Zarate — a native of Lima, Peru — added to Zarate’s Latin Mexican Grill’s menu as it made the transition from a traditional Tex-Mex style eatery 11 years ago into the international restaurant it is today, where the lomo saltado remains the most popular dish.

“It became so popular, so after I see the change in acceptance of the customers, I started experimenting with different meals, and that’s how we created the menu,” Zarate said.

As the many flags inside the restaurant at 706 S. Broadway in Edmond attest, the cuisine featured at Zarate’s includes dishes native to Mexico, Peru, Chile, Brazil, Bolivia, Argentina, Venezuela, Puerto Rico and Jamaica.

“My inspiration was to show the community that the Latino heritage is based on more than Mexican food,” Zarate said. “I decided to go from Mexico all the way to Argentina. It’s a showcase to show that Latino food is tasty.”

Zarate said he likes to travel around the country, particularly Florida, and overseas to speak with other chefs and pick up recipes for the menu.

For someone who likes to explore different cuisines, there is no better option in the metro area than Zarate’s. During my first visit, I had trouble deciding between three of my favorites: Puerto Rican mofongo (stuffed plantains), chimichurri covered salmon and Honduran tamales cooked in banana leaves. I found out that I’m not alone.

“Every dish has become popular enough that we’ve never had a reason to take something off of the menu to add other things. Almost every dish is someone’s favorite,” Zarate said.

I ended up choosing the Honduran tamale ($9.99 for one) because there are times I crave the creamy, almost polenta-like texture of the masa from a tamale cooked in a banana leaf compared to its cornhusk cousins.

Before food arrived, I received the obligatory chips, salsa and queso. Zarate’s salsa is a standout. While not much in the way of spice level, it’s very fresh and heavy on the garlic and lime. It was addicting and in contention for my favorite complimentary salsa I’ve had in the metro area.

Zarate’s achieves the creamy tamale texture I desired, filled with spicy stewed beef, rice and black beans that were thickened with pureed beans and had plenty of smokiness.

It would be impossible for me to go to a restaurant for the first time and not try its signature dish. I went into my first lomo saltado ($12.49) experience with excitement and was not disappointed. There is a little bit of cognitive dissonance when you get that first taste of soy sauce with salsa still lingering in your mouth, but when the marinated steak combines with the cilantro-based ají, the umami flavor of the soy pairs perfectly with the brightness of the green sauce.

My only complaint with the dish is that it is quite starch-heavy. Plantains, fried yucca, rice and french fries are all on one plate. I had fun dipping the yucca into the ají, and the plantain was caramelized. I found the French fries to be tasty but somewhat soggy from the sauce.

I finished my initial trip to Zarate’s with another Peruvian specialty, ceviche, the country’s unofficial national dish where it is thought to have originated. The Zarate’s version combines tilapia, octopus and shrimp in a spicy lime juice marinade and is served with yucca and puffed-up Cuzco corn kernels.

I found the shrimp and octopus to be tender and flavorful, but the tilapia wasn’t my favorite. I would’ve preferred a higher price point ($12.99) to get a better quality fish.

The success for Zarate’s is apparent from a healthy dinner crowd and friendly service. The wait staff brought out orders promptly and cheerily refilled my drink. I ate my meal and was out the door with two takeout orders in less than 20 minutes. I was impressed.

It has been successful enough that Zarate opened a second restaurant, Jorge’s Mexican Kitchen at 9244 N. Hiwassee Road in Jones, two months ago. Zarate now spends his time getting the new establishment on its feet while thanking the loyal customers who embraced the pan-Latin cuisine at Zarate’s.

“It’s been a fun ride, and we meet new people every week,” he said. “The restaurant has been successful and we’re happy with the product.”

What works: The steak in the lomo saltado is juicy, and the texture of Honduran tamales is perfect.

What needs work: The ceviche would benefit from fish other than tilapia.

Tip: Order some of the house salsa for home.