Oklahoma City prepares for its first streetcar service in decades. 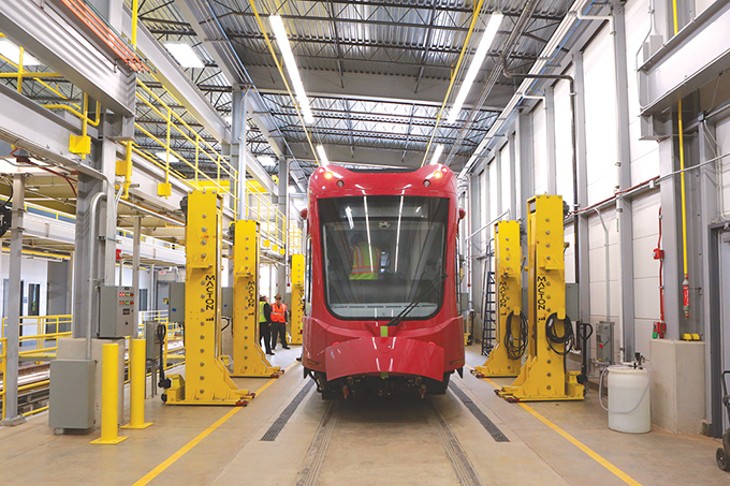 After a decade of discussion around City Hall and among the public about building a modern streetcar system for Oklahoma City, downtown streets are showing all the signs that soon, the sleek colorful streetcars will glide through.

In the downtown core and Midtown, pedestrians and drivers travel over rail tracks. In Bricktown, which will see its loop completed in May, crews are installing stretches of overhead catenary power system above the route, and station shops are beginning to take shape. In the newly constructed streetcar maintenance facility at SW Seventh Street and Hudson Avenue, three of the seven streetcars are parked and initial testing is underway on the Hudson Avenue track.

City officials report that construction of the streetcar infrastructure remains on time and under budget, despite some future change orders that might come before the Oklahoma City Council in future months. The OKC streetcar system, part of the MAPS 3 initiative, is expected to begin service in December.

For the first time since the 1940s, Oklahoma City residents will have their chance to peek inside a streetcar or take a seat inside as the City of Oklahoma City hosts an open house 11 a.m.-1 p.m. Friday at the maintenance facility.

“There’s been a lot of excitement from people looking forward to the streetcar, so we wanted to provide an opportunity to see a streetcar up close,” said David Todd, MAPS 3 program manager, in a news release. “You’ll be able to get a feel for what it’s like inside, sit on the seats and be among the first people in generations to be inside an Oklahoma City streetcar.”

As the streetcar gears up for its first run on OKC streets, Embark, the city department providing bus, ferry transit and downtown parking for the OKC metro, is paying close attention and making its own arrangements to prepare for the streetcar. Once operational, Embark will operate the streetcar as part of its public transit system.

“You often hear Mayor [Cornett] say this, and we love to borrow it, we like to view [the streetcar] as a down payment of this larger transit network,” said Embark public information officer Michael Scroggins. “We as a city have a lot to be proud of by voting for the MAPS projects. … [Embark] is excited to be a part of that story. It will become a part of our overall family of transit services, which further shows we have a multi-model system.”

The streetcar will operate on two routes, with the first being the two-mile loop through the city’s entertainment district Bricktown and the second serving the rest of the central urban core through a 4.8-mile mainline. There will be 22 stops with five streetcars in service. Riders can expect a streetcar at each stop every 12 to 15 minutes.

Herzog Transit Services, Inc., the largest private passenger rail operations and maintenance provider in the United States, will operate and maintain the Oklahoma City Streetcar. Embark’s board of trustees executed a six-year agreement with the Missouri-based company a year ago. Scroggins said Herzog “brings to the table the rail expertise that we don’t currently have in a local way.”

As Pennsylvania’s Brockville Equipment Corp. continues to deliver the streetcars, engineers through the MAPS 3 office perform checks and test to ensure the cars come in as ordered. Embark staff are also conducting checks and investigating the cars’ safety standards. Additionally, Embark staff is developing a campaign to encourage safe behavior around the new streetcar system. The safety messaging is designed to teach pedestrians, cyclists and motorists to be alert around the streetcars.

In May, Embark’s board of trustees is expected to approve fare rates for the streetcar. A $1 fare is proposed for a one-trip pass, with a day pass selling for $3. The proposal also calls for a $32 monthly pass and $384 annual pass.

Oklahoma City Streetcar has played a significant role in the movement toward advancing and prioritizing public transportation, explained Scroggins.

One reason is that the streetcar has long been tied to enhancing the bus system and eventually spurring a regional transit system with commuter rail options to Edmond and Norman. With the city investing $131 million of MAPS 3 money into the streetcar project, proponents of the project encourage the city to expand the bus system to complement the streetcar. City officials report that Embark’s 2018-19 budget proposal submitted to the city council in May will include a call for Sunday bus service, which currently is not offered.

“The level of community support for public transportation has grown at an unbelievable rate,” he said. “While many recognize that they are not a bus customer, they do realize and understand the value of the service it provides. … I think the streetcar has allowed for that dialogue to go a little deeper. People are excited because we are diversifying. In some ways, I think it’s because they see it being modernized.”