Maybe it’s because people are drinking, but it seems like customers are more apt to let standards slide when they’re eating at a tavern. Those folks need to visit Fat Dog Kitchen & Bar, 1234 N. Western Ave.

“It’s just bar food,” is a common neighborhood watering hole refrain as diners partake of a plate of nachos or a basket of fries. But one shouldn’t accept less just because there’s a big beer selection or the bartender knows how to make a good cocktail.

One doesn’t have to make that concession at Fat Dog. The pro-puppy restaurant is happy to serve customers alcohol without sacrificing the quality of the food. That was clear from the first bite of chili-cheese fries ($8).

Some appetizers are meant for a single person and some are meant to share. The enormous basket of thin-cut chili-cheese fries is probably enough for a small army. The crisp fries were all akimbo in the big, silver bowl, making the application of chili and queso sporadic and captivating.

Yes, I am captivated by fries, especially when I’m never sure with each bite how much cheese they have soaked up or how the mildly spiced chili will stick to them before they get to my mouth. One warning about this appetizer: It’s difficult to stop eating, even knowing more food is on the way.

If you’d rather reserve your daily french fry intake for later in the meal, I recommend ordering a chicken-fried steak sandwich ($10), which comes with fries on the side. Then again, as delightful as the petite fries are, the sandwich is stiff competition for your attention.

Chicken-fried steak is tricky to get right. If you cook it incorrectly, the steam from the meat will leave the crust soggy or it will spend too much time in the oil and arrive at the table with scorched bits and off flavors.

Fat Dog serves its chicken-fried steak with a golden-brown crust that retains a nice crunch while protecting the tenderized steak inside. The seasoning is spot-on, as well, with enough salt to bring out the taste of the beef.

I was also quite taken with the Fat Dog burger ($10, including a side). The skill of a cook shines through on dishes like this one, specifically because burgers are so commonplace. People who see a dish everywhere mistakenly believe it is easy to prepare.

Fat Dog’s burger is a model of simplicity: a grilled beef patty on a buttered, toasted bun. Add cheese or any of the usual vegetables or condiments that come on the side if you like, but I think this is worth tasting without any additions. The burger comes made-to-order, which is always reassuring because it means the cooks aren’t just holding a bunch of patties on the grill, waiting for someone to order one.

Each bite of the burger was juicy and tender, a perfect medium-rare, and seasoned beautifully. That’s often the difference between a home cook and someone who works in a restaurant. Professional cooks aren’t afraid to use salt.

Carne asada tacos ($9) are a big seller at Fat Dog, but the flavor of the beef didn’t make much of an impact on me. The tacos are served with a smattering of diced red onion and cilantro and a side of chips and salsa. The salsa was the big winner for me and should absolutely be applied to the tacos for a big burst of freshness and a nice, lingering heat.

Fans of Iron Star Urban Barbeque’s fancy mac and cheese side dish should look forward to Fat Dog’s macaroni and cheese ($7). Both use a mild, creamy cheese sauce that is decadent and delicious. I enjoyed the way the restaurant reincorporated the queso into the menu, and the hungry noodles definitely hang onto the sauce, giving each bite a lot of richness. It’s a filling dish and perfect for keeping diners warm during the cold months. 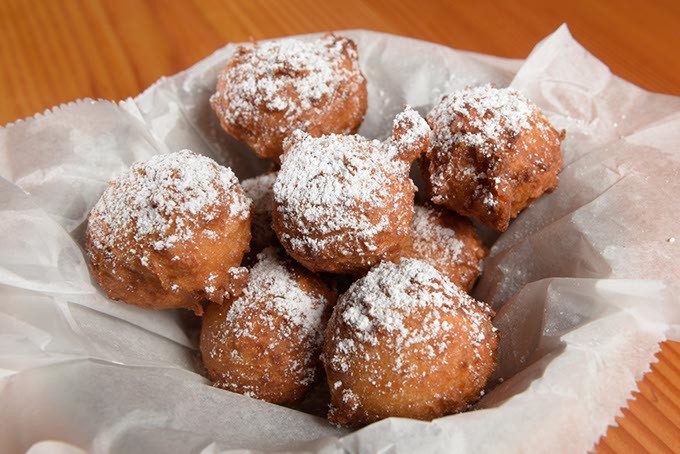 Much like the chili-cheese fries, an order of apple fritters ($5) is great for a group. The dessert includes pieces of apple in each fried ball of dough and comes covered with a sweet blizzard of powdered sugar. One thing that’s missing is some kind of dipping sauce on the side. The fritters and the sugar can leave one feeling a bit parched, which isn’t too big a problem in a restaurant that serves plenty of drinks.

The bar has a small selection of local craft beers and a great wine list with by-the-glass and bottle-only options. The bartenders can make all the usual cocktails, but Fat Dog offers several pun-driven specialty drinks, including Downward Dog ($7) with Tito’s Handmade Vodka, club soda, 7-Up and cranberry juice and Leg Humper ($9) with Cielo reposado tequila, Sprite and lime juice.

Fat Dog is well-known for its dog-friendly patio and laid-back vibe. In the warmer seasons, the restaurant hosts bands outside, but it switches to solo acoustic performers once the outdoor area becomes inhospitable. The patio has plenty of bar games, including giant Jenga sets, which add to the friendly neighborhood pub feel.

The owners made an intentional choice naming it Fat Dog Kitchen & Bar. Food is not an afterthought, which is what sets this establishment apart from the competition.

Print headline: Dog pound, The bites are even better than the barks at canine-friendly Fat Dog Kitchen & Bar.

What works: The chicken-fried steak sandwich and mac and cheese are howl-worthy.

What needs work: The carne asada tacos were bland without salsa.

Tip: Bring your dog along, but bring a leash and be prepared to stay on the patio.