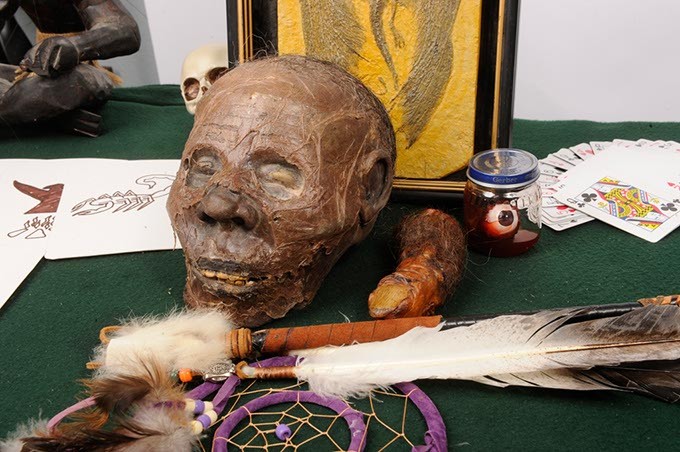 Jeramy Neugin and his father Bobby were working construction in North and South Carolina in 2001, but in the days after Sept. 11, work slowed and the Neugins started looking for new things to do. What they discovered was something that had always been with them in the traditions of the Cherokee Nation.

And that led to swarming wasps, scorpions and severed limbs.

“While we were discussing what to do, we did what we always did, which was coin tricks,” Jeramy Neugin said. “Bobby suggested we try doing magic, and so we started. We went to learning everything we could, reading every book we could read. We learned as much as we could from historical archives. From there, we went to writing other magicians, asking them where to go, what books to pick up, what to learn and what to get. And so we went off of their suggestions, finding books and DVDs and how-to tapes on that, and then we’d go to libraries and look up every bit of information we could find on magic.”

As they delved into techniques and built the foundation for Lost City Magic, a successful touring act named for their hometown near Tahlequah, they discovered their own family’s rich tradition of magic and the role that sleight of hand played in Cherokee society. One of their own ancestors, a Trail of Tears survivor named Rebecca Neugin, was a conjurer.

“It’s always been part of our culture,” Jeramy Neugin said. “The Cherokees were one of the few tribes that actually had magic as part of their daily lives. Just like a medicine man or a shaman, they would have their own magician or conjurer that would go around and teach everybody how to do sleight-of-hand magic. It was actually part of a ritual where, if a boy wanted to marry a girl, the magician and the girl’s parents would go and visit the boy and he’d have to put on a show and have to fool them. The theory was if he was able to fool that magician, he was clever enough to care for the girl.”

What Lost City Magic does might be historically accurate, but that doesn’t mean it’s overly reverent or stodgy. If anything, Lost City Magic specializes in freaking out audiences from Tulsa to Las Vegas. Bobby Neugin’s research often leads to some of the duo’s signature illusions.

“He found an Indian legend about a giant wasp that had come to life and broken out of a mountain and attacked a village,” Jeramy Neugin said. “In retelling that story, the magician would take dirt from that mountain and make a swarm of wasps emerge from his hands. So today, Bobby will put dirt in my hands and I’ll make an actual swarm of live wasps come out.”

Lost City Magic is not a slow-build act; the Neugins keep the action coming throughout their set, which often involves Jeramy Neugin getting his head set on fire or having a limb severed and live scorpions pouring out of the wound. Snakes often get a raw deal in their performances, getting chopped in half, but thankfully for the snakes and the reptile advocacy groups that care about them, they are healed by the Neugins in the end.

The duo spectacularly entertains their audiences with each performance, all while maintaining a tradition that was all but forgotten. Because of that, Lost City Magic stands out in the illusionist community by delivering something that feels utterly original but is as old as Cherokee society itself.

“What survives today are the stories, not the magic — they kind of killed that part out,” Jeramy Neugin said. “They were the storytellers and the historians. And so that’s what we were able to come up with, and it became our signature, that we’re the only magicians who can do that today.”