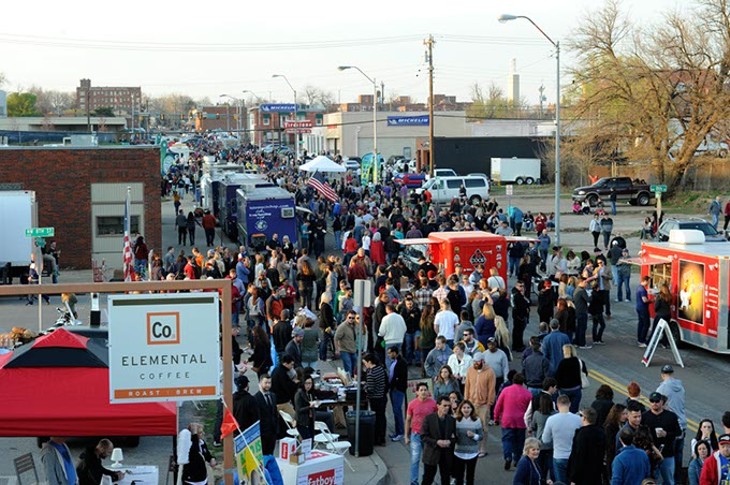 Close a mile of 23rd Street to vehicles for a few hours on a Sunday and 20,000 people show up. Wrangle a bunch of food trucks on a Friday night in Midtown and another 40,000 appear. Add in several other street festivals throughout the year and it’s clear that Oklahoma City is in love with getting together.

“There’s a big appetite; it’s something the city really wants,” said Brian Bergman, event manager of H&8th Night Market food truck festival, which saw crowds of 40,000 last year. “For so many years, for decades, Oklahoma City kind of rolled up its sidewalks after 5 o’clock.”

As the urban core continues to redevelop, there appears to be a craving to gather, whether at restaurants like The Pump Bar, which draws large crowds to its lawn games and outdoor tables, or festivals like Open Streets OKC.

Oklahoma City is far from the only city where the masses gather. But when H&8th boasts being the nation’s largest food truck festival, OKC earns some credit as a town that likes to party at a level not seen in every city across America.

But more than just a desire to enjoy tasty food and craft beer, many see the success of local street festivals as a sign that today’s society is looking to connect.

“I think that it’s ... a resurgence of community,” said Rep. Jason Dunnington, a House member from central OKC who appeared on an episode of Oklahoma Gazette’s Capital City podcast from H&8th last week. “It’s a real desire for humans to connect with one another.”

A growing desire for community can be seen in the increased demand for houses with front porches — according to the National Association of Home Builders’ Home of the Future — and the millennial generation’s overwhelming desire to live in communities less reliant on cars, based on a report from Transportation America. It seems today’s society is hungry to gather, and the second annual Open Streets OKC event last month was another example of how a simple street closure brings large crowds.

“Our reception has been over and above our expectations,” said Jackie Shawnee with Oklahoma City-County Health Department, one of the event sponsors.

When the first Open Streets was being planned, a similar event in Minneapolis was looked at as an example with its crowd of 3,000, said Megan Carter, also with the health department. However, OKC’s own Open Streets topped 20,000 in 2014, and an even larger crowd came out to this year’s festival.

“This is really an event we would like to see happen biannually now,” said Shawnee, adding that a location is being sought south of the Oklahoma River.

Drawing thousands to a festival is not a new phenomenon in Oklahoma City, as the Festival of the Arts and Oklahoma State Fair are just some of the festivals that have been in existence for many years. But it’s the simplicity of events like H&8th or Live! on the Plaza that are unique. For two years in a row, Open Streets has been held at the same time as a sold-out Thunder game, proving it doesn’t take a multi-million-dollar event with global celebrities to draw a crowd in this town.

“I think why [these events] work is because it’s not about 40,000 people, it’s not about food trucks, it’s not about live music,” Bergman said amidst the crowd of H&8th last week. “I’ve gotten calls from food truck events in New York City asking us how we are beating them at their own game. What we are doing here is unique.”

In Oklahoma City, if you close the street, they will come — in large numbers.

Print headline: Party city, Oklahomans love to get together, as evident by the large crowds at its outdoor festivals.