On its 50th anniversary, Oklahoma City Festival of the Arts returns to the location where it started. Both have substantially changed since then.

Bicentennial Park, between Oklahoma City Hall and Civic Center Music Hall, underwent a major, $1.6 million redesign that makes it more usable and attractive than ever.

The festival has grown to proportions that few leaders might have imagined 50 years ago.

It runs six days, Tuesday through April 24, in and around Bicentennial Park between Walker and Lee avenues and Colcord and Couch drives in downtown. For the past several years, attendance reached an estimated 750,000, with around 5,000 volunteers. 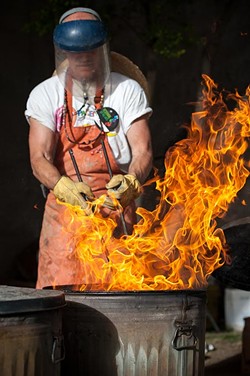 This year, organizers emphasized the festival’s free experiential aspects of the festival even more than in years past.

Artist demonstrations are a feature that has been enhanced this year.

A youth art area was organized to allow easier movement to activities and events.

Produced by Arts Council of Oklahoma City, Festival of the Arts helps fund the nonprofit council’s year-round free and low-cost programs, such as after-school and summer youth arts events.

“We knew we were going to have to move over two years ago,” said Peter Dolese, Arts Council of Oklahoma City executive director.

The event was in its prior location at the west end of Myriad Botanical Gardens for approximately 30 years.

Festival relocation became necessary due to heavy construction of streetcar and other projects at the festival’s previous venue, organizers said.

The hard work by arts council leadership paid off, as Bicentennial Park provides a more visually integrated space where visitors can easily enjoy a number of festival features.

“The park is more people-friendly than ever,” said Christina Foss, Arts Council of OKC director of communications.

Paid parking is a convenient option for visitors, too. The Sheridan Avenue lots visitors have used for years are available this year. Every 15 minutes, shuttles run to and from the drop-off point at Walker Avenue and Colcord Drive. In addition, the Arts District Parking Garage, located within a block of the festival, is another paid option.

A key festival element each year is visual art. This year’s theme is First of Spring. The event poster artist is David Holland from Oklahoma City, organizers said.

Artists from across the state and nation arrive each year with enough works in tow to accommodate six days of what can be intense selling. Pieces span from thousands of dollars for larger works to less than $25 for smaller prints and generate questions as well as sales.

One common question asked of organizers each year, especially by artists, is how they are selected to participate. Festival co-chairs Suzi Clowers and Kermit Frank explained how the process works.

After 50 years of increased event popularity, they said, the selection process became very involved. This year, 504 artists representing 41 states applied to compete for 144 slots. A deliberate and long process ensures accepted applicants are valuable to the festival and its guests.

Artists submit portfolios in June and July. Once submitted, the jury process begins.

This year, 88 of the 144 chosen artists are from Oklahoma, Clowers and Frank said. It frustrates them when people occasionally question the process.

“It makes me sad to hear that there’s a perception out there that anybody is discriminated against, particularly local people,” Frank said. “We want there to be as many local people as there possibly can be.”

One requirement that might surprise first-time applicants is providing a photo of what their booths look like.

“It’s not only to see what ideas they have for the booth,” Clowers said. “It’s to see the scale of their work compared to the booth.”

Both agreed it’s important for local artists to apply and be a part of the process. 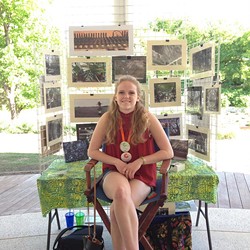 The festival’s most intensive experiential parts feature youth activities. In past years, activities were scattered across the grounds of Myriad Botanical Gardens and involved families walking a block to participate in each one. That’s not the case this year.

A youth art stage, Young at Art Mart and Children’s Art Field are located near City Hall so children can easily move from one area to the next. A face-painting area also is located nearby.

Art Stage allows children to observe artists at work. The “no adults allowed” Young at Art Mart sells original works by favorite festival artists for $5 or less, and kids can create their own masterpieces at Children’s Art Field. 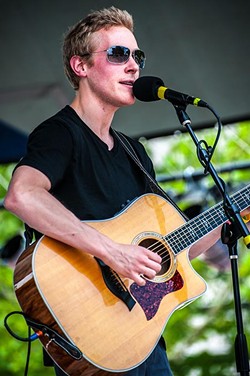 Street performers also will be featured each day in the center of the park.

“It takes 5,000 volunteers to make the Festival of the Arts happen,” Clowers said.

“There are 48 committees that we have to staff with volunteers, plus the other leaders,” Frank said. “And each committee has 96 volunteers.”

That’s 4,608. Then add eight production teams required to set up the festival.

“We start by asking a new volunteer what they are interested in and then try to make the fit to the job,” Frank said.