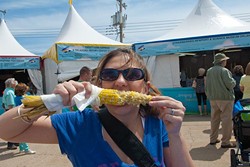 Food is a big draw for almost any outdoor event, but it seems to take center stage each year at Oklahoma City’s Festival of the Arts.

The event is set to run from Tuesday through April 26 and features 144 artists who applied and were accepted to show their works by members of Arts Council of Oklahoma City. From photos and watercolors to sculpture and jewelry, the art on display — and for sale — touches on almost every different medium.

While art row will be crowded with gawkers, looky-loos and peepers aplenty, the majority of the lines will be found in a semicircle of restaurant booths hawking Indian tacos, chicken tikka masala and buttery ears of freshly roasted corn.

That, too, is decided annually. Even longtime favorites must compete to sell their fare at the festival, said Christina Foss, council director of communications.

“Performing arts, visual arts, even the food vendors are juried in,” she said. “We want to check the quality, the variety and the prices.” 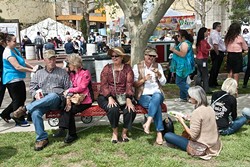 Booths including Craig & Carter’s Famous Fish Tacos and Papa’s Greek Food might seem to be locked in, but the judges try to bring in something a little different each year.

This year’s newcomers are Kaisers Diner and C’est Si Bon.

C’est Si Bon owner and executive chef Ken Mills said the festival is a great way to get exposure for his Midwest City restaurant.

His booth will serve fried catfish with tiger sauce, crawfish bread and spinach and artichoke bread, each for $9.

“I’m happy to be introducing crawfish bread to Oklahoma City,” said Mills, who brought the recipe with him from New Orleans.

He said he knew it would be a hit after watching the judges react to it at the food tryouts earlier this year.

While C’est Si Bon takes a more savory route, Midtown’s Kaisers Diner brings out a bevy of desserts to delight festivalgoers. Co-owner Angie Uselton said its main attraction will be a homemade, old-fashioned peach cobbler with vanilla ice cream for $8. It also will sell single scoops of salted caramel and chocolate ice creams.

OKC Improv is a teaching and performing group that began in 2009. Reiman said it’s more than just comedians or actors — the majority of people taking classes have no theater experience at all.

“They want to be better at presentations and being able to think on their feet,” she said.

The festival will provide some funding, but Reiman also wants it to bring new awareness of the group to the city.

Foss said food vendors choose their own arts nonprofit and work out agreements about donations.

“The sample agreement we provide them suggests a 20 percent donation from profits,” she said. “Nonprofits will provide volunteers to work the booth the whole week.”

Of course, there’s more to eat than just what can be found on food row. Vendors are sprinkled throughout the festival, selling drinks, sno-cones and roasted nuts. But for dinner and a show, it’s hard to beat food demonstrations.

“This is actually our third year for food demos,” Foss said. “They used to be held near Stage Center, but this year, we’re putting up a culinary arts tent in the southwest area of Myriad Gardens.”

In addition to access to beer and wine tents, organizers also want food demonstrations to be more visible to visitors.

At 45 minutes each, the demon-strations bring some of the city’s best-loved restaurants and food personalities to the stage to show off their skills and teach audiences how to prepare their favorite dishes at home.

Savory Spice Shop owner Able Blakely said he’s not sure what he’ll make during his demonstration, but he wants to help educate visitors about the importance of using fresh spices.

“I’m definitely going to use some fresh spices from the shop, possibly to highlight one of the lesser-known curry blends,” he said. “Actually, I just got back from Turkey, so maybe I’ll cook something Turkish.”

Audiences can watch the overhead mirror to see a bird’s-eye view of the preparation and taste samples of the food at the end.

Food is art, right? Well, for those hungering for the inedible kind, too, Foss said one of her favorite exhibits is the Youth Art Sale, which runs 11 a.m. to 5 p.m. April 25. Just like everyone else, the young artists — ages 8 to 18 — have to apply to showcase and sell their art.

“This gives them a chance to see what the professional artists do to get in,” she said. “They keep all their proceeds, so they can learn about how you can make a living as an artist.”

print headline: Eating masterpieces, Laugh, look at art and gorge until you’re content at the Festival of the Arts. Did we mention there’s food? Because there’s a lot of it available this year.

Note: Pets are not allowed.

Speaking of Festival Of The Arts, food