Festival of the Arts features six days of arts, cultural and culinary adventure in Bicentennial Park.

Six days of art, music and food await nearly 750,000 guests as Arts Council Oklahoma City’s Festival of the Arts returns Tuesday through April 30 at downtown’s Bicentennial Park. From Lee Avenue east to City Hall and from Colcord Drive north to Couch Drive, art is in charge.

“We like to think of it as a little something for everyone,” said Lindsey Pendleton, Arts Council director of communications.

There is space for children’s activities and youth art sales, adult make-and-take pottery and “literally art for everyone and food for everyone,” she said.

“Because of the juried process, we have new artists every single year — it’s never the same festival twice,” Pendleton said. “The same goes for the performing artists, the food that’s available and the culinary demos. While we do have some old favorites and things that people look forward to, there’s also new and exciting things each year.”

In order to reduce waste, some vendors will have potato starch spoons or wooden forks, and others will donate unsold food to area homeless shelters.

While fine art and dining cover the majority of the five senses, Pendleton said it is better to have music that will enhance the artistic atmosphere. Filling three stages, 300 performing artists and musicians showcase genres spanning country, bluegrass, rock, jazz, soul and blues. Musical performers include everyone from classical guitarist Edgar Cruz to hip-hop performer Pawnee and OKC-based Choctaw dance-rap siblings Mike Bone from America’s Got Talent. One of the returning bands, Ravens Three, is a three-piece Celtic band whose members are all vocalists and include Audra Blankenship-Pierce on tin whistle and bodhrán (Irish drum), Dustin Cooper on guitar and Shawna Kennedy on fiddle.

“They dance around and enjoy it,” Blankenship-Pierce said of festivalgoers’ reactions to their performances. “Kids love it because of the rhythm.”

This year, festival organizers requested Ravens Three add a 40-minute set that includes traditional Irish love songs such as “P Is For Paddy” and “Tell Me Ma” in addition to their featured fare of Irish revolutionary songs, including “Foggy Dew.” 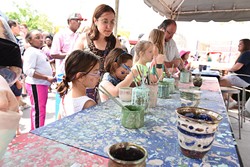 When not on stage, Blankenship-Pierce said she enjoys the wearable art and the food she finds each year at Festival of the Arts.

“I try to make sure I get a good bite to eat,” she said. “I like jewelry a lot. If I see someone selling handmade jewelry, I’m definitely going to go there.”

While much of the festival is geared toward adults, many children enjoy finding and buying art, too. For this reason, the Children’s Art Market lets youth buy affordable art for $5 or less.

After browsing and buying all day long, some inspired festivalgoers can create their own pieces, Pendleton said. Pottery Place allows children and adults to learn more about the Japanese pottery method Raku. Another area, Creation Station, sponsored by Oklahoma City University, encourages children to decorate a sculpture with colored tissue paper and is open throughout the festival. Children’s Art Field allows youths ages 3 to 12 to make miniature sailboats and other items for $2.

Pendleton said that people should attend Festival of the Arts because “it’s a wonderful opportunity to experience art from all over the country, from some of the top artists in their field.” The event is free and open to the public. However, pets are not allowed.