Parlaying a Diners, Drive-Ins and Dives appearance into nationwide success, Metro Diner is a passable classic diner but a fun hedonistic adventure. 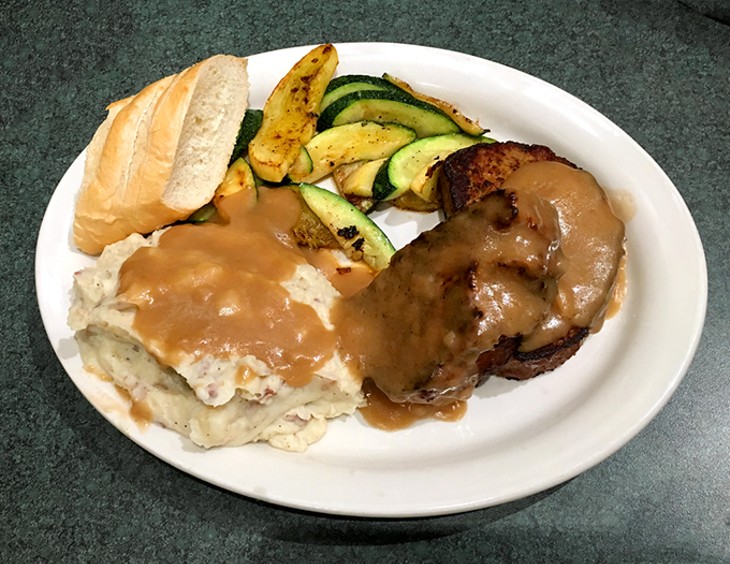 The Fieri effect is a very real thing, and we’re all living in a post-Diner, Drive-Ins and Dives world.

The hit Food Network show with host Guy Fieri is famous for only highlighting small operations with single locations, but with every appearance on the show, Fieri warns operators to be ready for increased business and attention.

Here in Oklahoma City, Mama E’s is a textbook case in spreading too thin. After owners Keith and Stephanie Patterson appeared on DDD in 2009, they opened a second location only to see it flounder from lack of attention and an ignominious appearance on another Food Network show, Restaurant: Impossible.

In 2010, Fieri made an appearance at a Jacksonville, Florida, restaurant run by Mark Davoli and his father called Metro Diner, and it has become one of the breakout hits from the show.

Metro Diner opened its 50th location this year, along with the 3000 W. Memorial Road location in Oklahoma City that opened in June. Davoli retains minority ownership in the business as it joined with ConSul Hospitality Group to accelerate its nationwide expansion.

The concept for Metro Diner is the same as the original Jacksonville location: scratch-made classics delivered with a majority of the menu checking in under $16.

During its rapid expansion, the Metro Diner menu has added new items like fried chicken and waffles ($15.49) served with strawberry butter. It’s a gargantuan meal that is half of a chicken and three large Belgian waffles that weighs in at 2360 calories, according to the menu’s calorie count that is about as useful as a message from Clippy in an old Microsoft Word document. I realize that it’s trying to be useful, but I can’t ignore it fast enough.

The menu has changed since the corporate takeover with additions like huevos rancheros ($11.49) that have been Fieri-fied by turning the dish into essentially nachos by frying tortillas (1580 calories).

The concept for Metro Diner is the same as the original Jacksonville location: scratch-made classics delivered with a majority of the menu checking in under $16. tweet this

Notably missing from the menu are two dishes highlighted during the DDD segment: a salad topped with steak and french fries and a banana and cream cheese-stuffed French toast topped with strawberry and blueberry compote.

I watched the segment in preparation for my first visit to Metro Diner, an early morning Sunday breakfast, and was disappointed the French toast wasn’t on the menu, instead replaced by a relatively mundane croissant version.

I settled for the corned beef hash with poached eggs and toast ($9.29) with a cup of its rotating house blend flavor of coffee (cinnamon nut). Corned beef hash is one of my favorite breakfasts, and I’m sometimes wary of ordering it because you’re just as likely to get something from a can that looks like dog food as you are in-house brined corned beef.

Metro Diner’s corned beef hash is certainly in the latter category, but it is so finely chopped with red skin potatoes that the quality product didn’t shine like I wanted it to. The hash was just a mixture of beef and red potatoes, and it desperately needed the flavor and contrast of some sautéed onions and/or sweet peppers. It left me slightly disappointed. The flavored coffee was nice, and it didn’t have the film that you see sometimes from low-quality store-bought versions.

The cinnamon roll pancakes looked good, but their potential to be cloying and the calorie count (1,420) scared me off. I could see the kitchen turning out fresh biscuits and waffles while the three different types of eggs Benedict made me wonder if I just ordered the wrong thing.

I returned for a dinner visit a few days later and ordered the one dish featured on the DDD segment that made it to the Oklahoma City menu: the meatloaf plate. I understand meatloaf is a non-starter for many people who grew up eating an uninspiring version at home or in a cafeteria, but it’s one of my favorite dishes when done correctly. 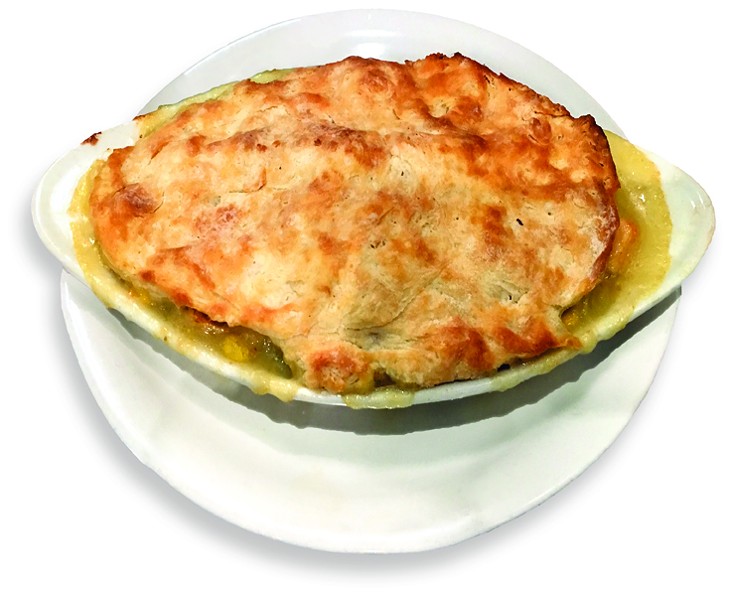 Just like good meatballs, meatloaf requires a mixture of meat and fat contents. According to Davoli’s recipe on the segment, Metro Diner uses ground beef, pork and turkey while also blending carrots, onions and mushrooms into the mixture with spices and binder of eggs and breadcrumbs. After being baked, portions of the meatloaf are crisped on the flattop, covered in brown gravy and served with mashed potatoes, squash and a baguette.

The meal was completely competent but didn’t rise to an upper echelon. I’d prefer a coarser chop on the vegetables and the introduction of extra spices to the meatloaf.

I also tried bites of the chicken potpie (regular sized at $9.29), and even on the smaller option, the portion is nearly the length of a high school regulation football.  I liked that Metro Diner topped the potpie with a biscuit crust rather than the sometimes-used pastry shell, but I missed the lack of a bottom crust layer. I enjoyed the potpie with a nice mixture of vegetables (lima beans, corn, carrots, peas and green beans) more than the meatloaf.

Metro Diner cooks with a higher-quality product and fresher ingredients than, say, Denny’s, the country’s largest diner-style chain, but Metro Diner simply can’t replicate the love and care with which Davoli prepares dishes at the original location.

As an everyday diner, I’ve had better classic diner fare at locally owned Sunnyside Diner and a few other individual greasy spoons.

Metro Diner’s strengths as a restaurant lie with the indulgent dishes. If you’re going to make a trip, pull out all the stops and order something crazy like the fried chicken and waffles or the Davoli burger, which uses grilled cheese as buns.

What works: Flavored coffee and over-the-top dishes like chicken and waffle with strawberry butter are delicious.

Tip: Order more indulgent dishes; it is where the restaurant excels.