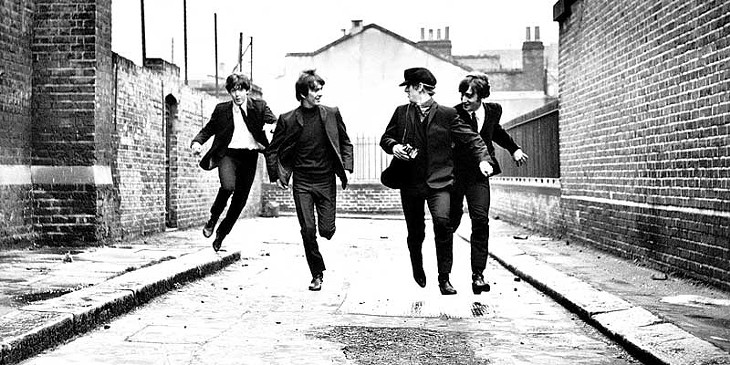 The chord that begins The Beatles’ “A Hard Day’s Night” is among the most justly famous in rock ’n’ roll. It is a prelude to pure exuberance, a sustained burst of electrified possibility.

The song, of course, lives up to the promise of that chord, as does the 1964 movie of the same name. Recognized as one of the best films of the 1960s,

A Hard Day’s Night captures the irresistible chemistry of The Beatles, the phenomenon of Beatlemania and the stirrings of what would be a worldwide cultural explosion.

The movie, newly restored and remastered, celebrates its 50th anniversary this weekend with a special theatrical release. Among the selected theaters is the Oklahoma City Museum of Art, 415 Couch Drive.

Shot in black-and-white, the film remains as fresh and fun as it was when the world was first swooning over John Lennon, Paul McCartney, George Harrison and Ringo Starr.

“After more than three decades, it has not aged and is not dated,” wrote the late film critic Roger Ebert. “It is one of the great life-affirming landmarks of the movies.” A Hard Day’s Night also set the gold standard for rock ’n’ roll movies, infusing wit and inventiveness into what had become a dull genre.

Influential Village Voice critic Andrew Sarris called A Hard Day’s Night “the Citizen Kane of jukebox musicals.” Even Bosley Crowther, The New York Times’ decidedly old-guard film critic, hailed it at the time as “a whale of a comedy” — although he added that “the frequent and brazen ‘yah-yah-yahing’ of the fellows when they break into song may be grating.”

United Artists executives had conceived the film as a cash-grab to capitalize on Beatlemania before what they assumed would be the fad’s inevitable waning. Essentially a fictionalized account of 24 hours in the lives of the Fab Four, the movie was given a seven-week shooting schedule, its budget a modest $500,000.

The rushed production didn’t bother director Richard Lester, an American who had been working in British television. The Beatles had seen Lester’s Oscar-winning short, The Running Jumping & Standing Still Film, which he had made with Peter Sellers, and the young band sensed a kindred spirit.

Screenwriter Alun Owen crafted a story line that highlighted The Beatles’ personalities and banter. Lennon later claimed much of the script was dispensed with (“We were a bit infuriated by the glibness of it and the shittyness of the dialogue,” he recalled), but it helped sketch the personas that would endure: John, the cynical smartass; Paul, the cute one; George, the wise observer; and Ringo, hapless but happy. For good measure, British TV actor Wilfrid Brambell appeared as Paul’s devilish — and notably “clean” — grandfather.

A Hard Day’s Night is an exhilaratingly irreverent blend of jokes, slapstick, faux documentary, musical, French New Wave — you name it. It finds magic in curious places, whether the band members are jumping around in a field or fielding questions at a press conference. “How did you find America?” a reporter asks John. “Turned left at Greenland,” replies the Beatle. Ringo, when asked if he is a “mod” or a rocker”: “No, I’m a mocker.”

And then there is the music. Beatles hits are front and center, including “Can’t Buy Me Love,” “And I Love Her,” “I Should’ve Known Better” and the insanely catchy title track, which Lennon penned in a single night.

Lester mused on the film’s enduring appeal in a 2007 interview with The A.V. Club. “If you want to have a film that lasts,” he said, “you either find your way to an original version of some universal truth, which is deadly serious and very valuable, or you make a profoundly silly movie. And I think we did the latter, because somehow silly doesn’t date as badly as earnestness.”