Film review: Guardians of the Galaxy 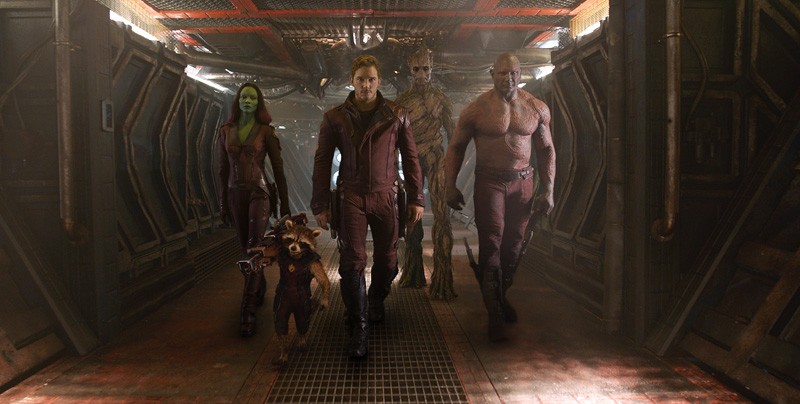 Just when you think you have reached your up-to-here limit of comic-book flicks and a ho-hum summer movie season, up pops Guardians of the Galaxy to restore your faith in the Marvel juggernaut and cinematic escapism.

Still, it isn’t entirely accurate to lump Galaxy in the canon of superhero flicks. While based on a relatively obscure Marvel series that first appeared in 1969, its adventurousness and fantastical worlds owe much more to Star Wars, which is to say the movie is essentially an intergalactic Western. Imagine if Star Wars’ cantina scene had been envisioned by someone with a sense of humor instead of George Lucas and you have a good approximation of Guardians of the Galaxy.

It is great fun and a welcome respite from the de rigueur gloominess that has weighed down summer fare in recent years. There are no inner demons for tortured heroes, no humorless mythologies, no coded references to 9/11. Instead, there is a talking raccoon, a blue-skinned gangster with bad teeth, a mining colony inside a ginormous skull, a blue cyborg, a particularly menacing arrow and a villain who looks like a cross between Darth Vader and a steroidal Marilyn Manson. Director James Gunn, a Troma alum whose credits include 2006’s Slither and 2010’s Super, is an inspired choice to take the helm. He and co-writer Nicole Perlman strike an irresistible balance of action, comedy and even emotional depth.

Anchoring it all is a terrific performance by Chris Pratt (Andy Dwyer of television’s Parks and Recreation) as Peter Quill. Abducted by space aliens as a kid in 1988, Peter grows up to become a wisecracking rogue who cheats, steals and seduces his way through the galaxy. He would like to be known as “Star-Lord,” but that nickname elicits vacant looks, not shudders of fear.

Such responses are understandable. Peter isn’t a conventionally fearsome outlaw. When he tracks down a fist-sized silver orb on behalf of a mysterious collector (Benicio Del Toro, Che), Peter slips on headphones of his vintage Walkman to jam out to the 1974 Redbone hit single “Come and Get Your Love.” What follows is a particularly joyful and hilarious solo dance. The tune, part of a blissful soundtrack packed with ’70s-era bubblegum pop, reminds Peter of his late mother.

The orb is coveted by all sorts of badass types. Among them is Gamora (Zoe Saldana, Avatar), a green-skinned assassin who has been dispatched by evil Ronan (Lee Pace, The Hobbit: The Desolation of Smaug) to retrieve the sphere. The caper also ensnares Rocket (voiced by Bradley Cooper, American Hustle), the aforementioned raccoon, a bounty hunter whose “muscle” is a sentient tree called Groot (voiced by Vin Diesel, Riddick). Groot is only able to say three words, those being “I am Groot,” but the sentence is enough to fully converse with Rocket. Imprisoned after a dustup on the planet Xandar, the group winds up crossing paths with Drax the Destroyer (pro wrestler-turned-actor Dave Bautista), whose brute strength is matched only by his inability to comprehend metaphors.

These loners and misfits form an uneasy but effective alliance. The ensemble cast has extraordinary chemistry, but perhaps the biggest surprises here are the finely drawn (literally and figuratively) CGI characters of Rocket and Groot. Pathos and laughs ensue, with Cooper deserving special props for his transformative vocal performance.