The stakes are high in Christopher Nolan’s universe. If you don’t leave the theater feeling a bit dazed, then the man hasn’t done his job. 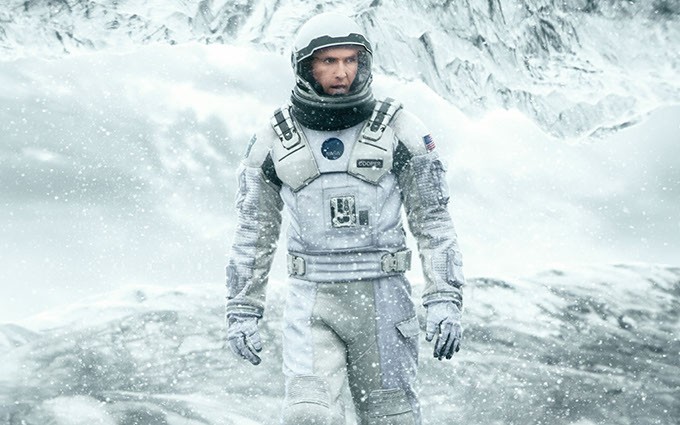 Christopher Nolan doesn’t mess around with little ideas. In films like Memento, the Dark Knight trilogy and Inception, he explored memory, justice, dreams and the nature of reality itself. The stakes are high in Nolan’s universe, too. If you don’t leave the theater feeling a bit dazed, then the man hasn’t done his job.

Interstellar is standard Christopher Nolan fare: big, dramatic, chock full of ideas. But it’s also a little like being trapped in conversation with a self-important and slightly drunk professor of quantum physics. The chat is fascinating for a good while — until it isn’t.

The movie certainly doesn’t lack for plot. Earth is slowly dying in a not-too-distant future, with massive dust storms ravaging American farmlands. Among the impacted farmers is Cooper (a very good Matthew McConaughey, Dallas Buyers Club), a widower raising his children Tom (Timothée Chalamet, Men, Women and Children) and Murph (Mackenzie Foy, The Conjuring). Cooper, a former NASA engineer, suspects a message of some sort is being conveyed when Murph insists that a ghost in their house is knocking specific books off shelves. That mystery leads Cooper and Murph to a hidden NASA site where they run into the brilliant professor Brand (Michael Caine, The Dark Knight Rises) and his daughter Amelia (Anne Hathaway, Les Misérables). It’s a fortuitous meeting. Professor Brand enlists Cooper, a hotshot pilot, to helm a space mission to a wormhole near Saturn. On the other side of the universe, the professor tells him, are three planets possibly suitable to serve as humankind’s next home.

Cooper struggles with leaving his children for God-knows-how-long before eventually blasting off into space along with Amelia, a few other scientists and TARS, a boxy robot (voiced by Bill Irwin) given to sarcasm. The journey slogs on for years. Cooper’s children grow up without him. Tom (Casey Affleck, Out of the Furnace) takes over the farm while Murph (Jessica Chastain, Zero Dark Thirty) becomes a crackerjack physicist working with the professor.

Christopher Nolan and his brother Jonathan wrote the screenplay in close consultation with acclaimed astrophysicist Kip Thorne. While I cannot attest to the science of Interstellar, most of it seems feasible and I have no expertise to question it. Still, I wonder if the Nolans would have been better served to pare down the large chunks of expository gobbledygook that pass for dialogue. The endless explanations weigh down the story even as they push it forward.

Obviously inspired by 2001: A Space Odyssey, the movie doles out generous amounts of spectacle in its nearly three-hour running time. From trippy black holes to the ginormous waves of a faraway planet, Nolan delivers breathtaking visuals worth seeking out on the biggest screen you can find. But at this point in cinema, just about any multimillion-dollar blockbuster conjures up mind-bogglingly believable special effects.

Interstellar is more compelling when it probes the relationship between Cooper and the children he is forced to leave behind. In one memorable scene, Cooper and Amelia discover that 23 years have gone by during what they thought was only a couple of hours exploring a planet in another galaxy. Cooper sobs uncontrollably as he watches 23 years of videos made by his family rush by on a screen: marriages, births, deaths.

It’s an emotionally devastating moment in a film that doesn’t have quite enough of them.