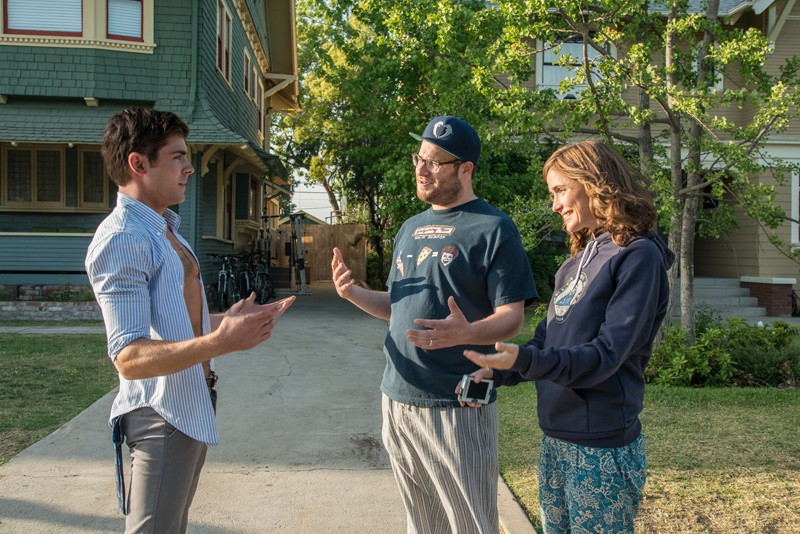 Is there a more unlikely lead actor than Seth Rogen? Since assuming the forefront in Judd Apatow’s Knocked Up, the burly, curly haired Canadian has shown audiences he’s someone they can not only laugh at but root for, doing so in everything from stoner comedies (Pineapple Express) to, well, more stoner comedies (This Is the End). Based solely on the way the film has been marketed, it would be easy to write off Neighbors as yet another Rogen stoner-com — or worse, frat-com — yet doing so would miss the mark entirely.

Rogen plays Mac Radner, a newlywed, newly fathered thirty-something adjusting to the responsibilities of adulthood. Mac and his wife, Kelly (Rose Byrne, The Internship), are your average post-adolescents, socially (and sexually) active and wary of being deemed uncool by younger generations. When a fraternity, led by the ever-photogenic Zac Efron (That Awkward Moment), moves in next door, Mac and Kelly immediately fear for both their sleep and their sanity, so they try to figure out a minimally invasive way tell the fraternity to “keep it down.” This can of worms inevitably devolves into a full-fledged proprietary war, and the ensuing efforts by Mac and Kelly to get the fraternity kicked out of its house serves as the film’s riotous central conflict.

In the wrong hands, Neighbors could just as easily be a hollow, dumbed-down affair, but the movie has too much wit and too much heart to resemble anything of the sort. While it does have its share of easy laughs (the whole exploding airbag wasn’t funnythe first time, much less the second, third or fourth), the movie is by and large defined by intelligent situational dialogue, like its many awkward exchanges between young and old or its razor-sharp “bros before hoes” bit. Both Byrne and Efron give commendable performances — especially Byrne, who is hilarious in her portrayal of a relatable wife and mother. She and Rogen have remarkable onscreen chemistry, and their husband-wife banter is arguably the film’s strongest asset.

Perhaps its most unheralded strength, however, is the direction of Nicholas Stoller (The Five-Year Engagement), who adds subtle flourishes of visual flair to a movie that already had plenty in the verbal department. The party scenes are heavy on the strobe lights (and the dubstep), establishing an invitingly informal tone. By the film’s climax, it almost feels like you were right there, engaging in the same debauchery.

For a film like this to succeed, it needs both charm and charisma. Neighbors has a lot of each. Few movies in recent memory capture the struggles of entering adulthood better, and few, if any this year, will offer more laughs. Though he has no affiliation, Neighbors has the look and feel of an Apatow project — not only because it stars Rogen but because of its potential to be universally embraced. And that’s the hallmark of a truly great comedy.