Katniss Everdeen’s first cinematic arrow managed to hit its mark despite a subtle wavering. The second split its predecessor like a bolt from a resurrected Howard Hill. 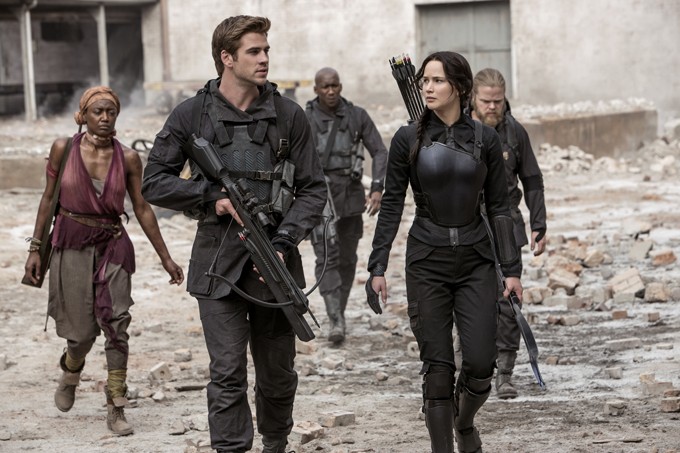 Katniss Everdeen’s first cinematic arrow, The Hunger Games, managed to hit its mark despite a subtle wavering. The second, Catching Fire, split its predecessor like a bolt from a resurrected Howard Hill. The most recent iteration of the franchise, Mockingjay – Part I, unfortunately catches the typically engaging heroine between exposed toes, thus disrupting the series’ trajectory toward a pantheon of classic sci-fi epics.

Mockingjay – Part I, directed by Francis Lawrence and adapted from Suzanne Collins’ final entry in the popular literary franchise, put forth a shoe-in for at least a semi-captivating narrative. Katniss (Jennifer Lawrence), the emerging icon of a social uprising within a dystopian dream, struggles between communal obligation and personal turmoil. In the nation of Panem, a coalition of 13 districts differentiated by raw resources and class suffer intense oppression and ridicule at the hands of an authoritative (and extravagantly flamboyant) capitol.

At the heart of this setting lies a perverse tradition: The Hunger Games, an annual death match in which representatives of each district violently compete to earn an abundance of food for their respective homeland. President Coin (Julianne Moore) and Plutarch (Philip Seymour Hoffman), the de facto leaders of the district revolution, cultivate Katniss, a recent champion of the games and fresh from eluding the capitol due to a battlefield malfunction, with the hopes of boosting the desecrated majority’s morale.

Similarly, Mockingjay falls short of fulfilling a thematic expectation. Transported adequately through two previous films, the ingredients of a meaningful commentary lie evident: The plight of reluctant celebrities, the literal price of human life, the nature of propaganda and the perils of civil unrest are presented in spades. Unfortunately, the film fails to convey any of these aspects in a meaningful way. Character development seems to be hindered, or at least underplayed by a unwieldy sense of scale. In tandem with this, sincerity is difficult to decipher. In one instance, Katniss humorously fails to evoke a revolutionary confidence when attempting to construct a digitally stylized “propo” with the help of Plutarch. After the destruction of a rebel hospital, however, Katniss’ discourse seems rather lackluster. This shouldn’t be attributed to poor deliverance on Lawrence’s part but a gradual desensitization to emotionally charged rhetoric in a state of mass violence.

As perhaps the film’s most disturbing infraction, Finnick (Sam Claflin), a former Hunger Games victor, provides a moving monologue in order to distract from an impromptu insurgency upon an exposed capitol. Within his statement, Finnick discusses a plethora of President Snow’s (Donald Sutherland) misanthropic vices, most notably his direct hand in a human trafficking bracket. Oddly enough, this “important” revelation is utterly muffled by the actions of the covert operation. Again, the film actively oppresses what would be its own tether to reality.

The work, though largely unsatisfying, is not completely devoid of boons. The score, composed by James Newtown Howard, remains one of the piece’s most notable draws, as the arrangement becomes one of the few facets worthy of anticipation. Similarly, the cast, including powerhouses like Lawrence and the late Hoffman, are a pleasure to observe despite being depressingly underutilized. Much like the aforementioned themes, the players’ ranges seem to be intentionally restrained, as if this film’s transitional status (more so than Catching Fire) led to a setwide contagion of apathy.

The set design, like the franchise’s previous entries, is well arranged and does appear as one of Mockingjay’s few conduits of intricacy. Trailing off from a focus on the Dadaistic and Rococo capital city, the camera’s lens finds its center at the heart of the impoverished nation. Panning over mass graves and remnants of constant urban decay, there is at least a slight attempt to visually captivate the atrocities of detached authority. In a parallel to the climactic scene of Rolland Joffé’s The Killing Fields, Katniss traverses through a landscape of scorched bones and wreckage, which unfortunately remains the only scene of a legitimate, silent contemplation the film has to offer.

A defense of Mockingjay would require a few troubling exceptions. First, stagnation would have to be forgiven, as the film halts the precedent established by Catching Fire, if not sending it backward. Afterward, the capable yet shackled cast would have to be accepted as such — suppressed in order to fulfill some estranged narrative objective. Finally, one would have to ignore the film’s ignorance of its own themes, boiling down the didactic to a tired reiteration of a common dystopian message despite obvious and substantial ammunition.

The film is not unlike a plastic banquet. Though it appears scrumptious and bountiful in theory, actual consumption of the meal does all but satisfy. Much like the first half of the series’ namesake, the latest entry of the formerly blossoming Hunger Games merely deprives.