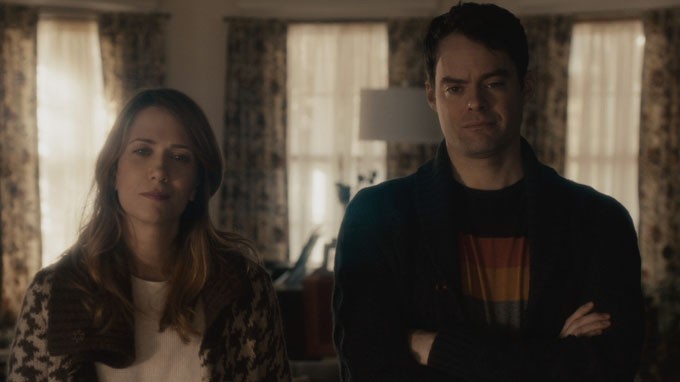 As evidenced by Maggie and Milo in the dramedy The Skeleton Twins, what binds family can look an awful lot like the shackles of self-destruction.

Saturday Night Live alums Kristen Wiig and Bill Hader star as troubled brother and sister Maggie and Milo. Their decade-long estrangement abruptly ends when Maggie, who lives in New York, gets a phone call that Milo is in a Los Angeles hospital when he is recovering from an attempted suicide. The call arrives as Maggie stares into a bathroom mirror and considers whether to overdose on pills.

In the wake of the suicide attempt, Milo moves in with Maggie and her sunny, frat-boy husband (Luke Wilson, Death at a Funeral). It is unclear, however, which twin is more damaged by shared childhood trauma. Milo’s depression is rivaled by Maggie’s serial infidelity.

This is the stuff of mopey indie film, but director Craig Johnson admirably tries soldiering past a catalog of Sundance-friendly clichés. While he can’t altogether overcome some obvious plotting and pat resolutions, The Skeleton Twins is distinguished by smart, appealing performances. Wiig is superb at capturing the comic possibilities of anxiety, but the real revelation here is Tulsa native Hader. As the acerbic Milo, Hader demonstrates serious acting chops.