Film review: The Trip to Italy 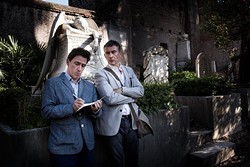 Italy can make for an unforgettable trip, but it’s not always convenient to jet on over there for its amazing history, mouthwatering cuisine and breathtaking views. On such occasions, The Trip to Italy, which plays Thursday through Sunday at Oklahoma City Museum of Art, 415 Couch Drive, is a more-than-acceptable consolation prize.

A sequel to 2010’s The Trip, the genteel comedy reunites director Michael Winterbottom with British stars Steve Coogan and Rob Brydon. The pair essentially portray exaggerated versions of themselves eating their way through Italy as part of a travel piece for a London newspaper. Coogan (Philomena, Night at the Museum, Tropic Thunder) is known to American audiences; Brydon has appeared in a smattering of movies but is far more familiar to viewers of British television. In fact, both Trip films began as BBC series.

I have no idea if Coogan and Brydon are good friends off camera, but I’d like to think they are. The two have an easy, lived-in chemistry that makes The Trip to Italy as much about maturing-male friendship as it is about two guys saying funny things.

Winterbottom (The Killer Inside Me, A Mighty Heart) creates a rhythm and tone that blissfully teeters between ambling and lyrical. Steve and Rob riff at one point about how sequels invariably disappoint, but the director and stars of The Trip to Italy are smart enough to stick to what made the initial film/series so winning: they check out beautiful vistas, dine on incredible-looking food in chic restaurants, flirt with pretty women and banter.

That last ingredient is what makes all the difference. Rob’s craving for attention would make him an exhausting travel companion in real life. From a safe distance, however, his talent for voice impersonations is great fun. As he did in The Trip, Brydon showcases his Al Pacino, Hugh Grant and Dustin Hoffman, while both he and Coogan indulge in a killer Michael Caine impression. Rob’s indefatigable performing finds a perfect foil in the slightly cantankerous Steve.

The trip isn’t all about impressions. Steve and Rob are as comfortable citing Shakespeare and Byron as they are speculating how they would eat track and field superstar Mo Farah if they were the sole survivors of a plane crash in the Andes. The riffing throughout is sharp, funny and seemingly improvised.

The Trip to Italy gets a little wobblier when it aspires to be more serious-minded. While the 2010 film painted Rob as a devoted family man and Steve as a conflicted commitmentphobe, this outing tweaks our perceptions of both characters. Even so, the subplots feel a bit grafted in to break up all the gab.

Fortunately, gab prevails. The Trip to Italy is a charming and affable road picture that hopefully hints at more to come. A previous generation had Bob Hope and Bing Crosby in a slate of Road movies. Coogan and Brydon would be worthy successors.

The Trip to Italy

The Trip to Italy