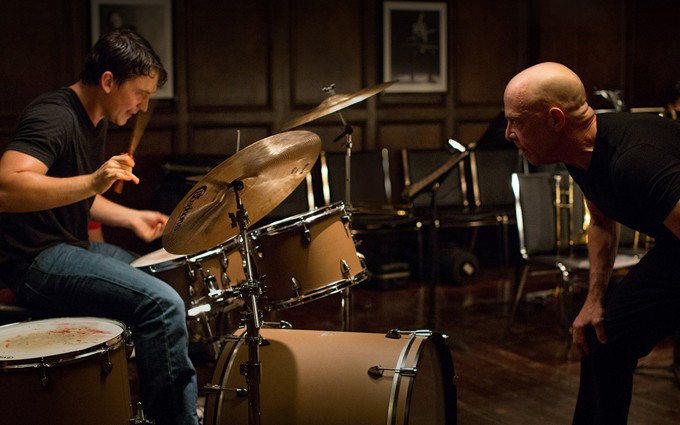 The pursuit of greatness — and the trials endured to get there — often makes for great drama. Whiplash certainly does, but it’s also far from your standard musician-movie fare. The breakthrough feature from 29-year-old director Damien Chazelle, now playing at AMC Quail Springs Mall 24, 2501 W. Memorial Road, is as ambitious as its protagonist, fledgling but immensely talented and driven jazz drummer Andrew Neyman (Miles Teller, The Spectacular Now), and it leaves nary a trace of potential untapped.

Andrew is a student at the fictitious Shaffer Conservatory, the most prestigious music school in the country, where, in a chance encounter, he successfully auditions for Shaffer’s most infamous conductor, Terence Fletcher (J.K. Simmons, Labor Day). In the film's first major dispute, Fletcher is eerily stoic with the unsuspecting Andrew in a practice session with Fletcher’s ensemble. But it doesn’t last long, as Andrew witnesses the unspeakable verbal and physical abuse his instructor is capable of when Fletcher berates, belittles and tears down his students to a beyond-excessive degree.

Startled but undeterred, Andrew continues his quest to be “one of the greats,” listening to recordings of his idol Buddy Rich and practicing with a vigor that leaves his hands awash in blood by session’s end. The more potential Fletcher sees in Andrew, the more abusive he becomes, and Andrew begins to estrange his girlfriend, Nicole (Melissa Benoist, TV’s Glee), and his father, Jim (Paul Reiser, Life After Beth), whom he sees as obstructions in his path to perfection.

The scenes in which Fletcher pushes Andrew to the brink of his ability (and his sanity) are, simply put, suffocating in their intensity. Teller’s portrayal of a steadfast, if somewhat naive, pupil is a monumental leap forward for the young actor, significantly besting any of his prior performances. Simmons, meanwhile, gives one of the most fiercely terrifying portrayals of the year, a nuanced glimpse into the motives behind a highly complex villain who takes his art to the extreme. An Oscar nomination — and most likely a statue — is in his near future.

While not without its problems — primarily a script that tests the limits of believability — Chazelle’s writing and direction are remarkably seasoned for such a young filmmaker. Select shots adeptly spotlight drum kits drenched in blood and sweat, while its sound weaves flawlessly between impassioned dialogue and an anxious jazz soundtrack. The subtle attention to detail adds a provocative depth to the drama as it unfolds.

For a relatively low-budget indie, Whiplash feels titanic. The sheer breadth of anxiety interspersed throughout its fervent performances and thematic undertones makes Chazelle’s film one of the year’s most compelling, discharging as much vitality as bodily fluids on Andrew’s snare. It’s a commentary on the value of idealistic perfection and what must be forfeited to attain it, but unlike most musings on the subject, Whiplash breaks down its audience in order to realize its own potential.