Councilmembers set a date on a new sales tax vote, amended policies and approved more spending, among other actions at Oklahoma City Council’s final meeting of the year.

Three weeks ago, former councilman Ed Shadid submitted a petition with enough signatures to allow residents to decide whether or not they want to implement a 1/8-cent sales tax dedicated to parks.

“If you look at what we’re asking to do, you’ll find it to be very transformative in terms of our parks operation,” said former councilman Pete White, a proponent of the tax. “It’s a crying need in parks to have a fixed source of revenue for programming, operations, maintenance, and this would answer that question.”

Mayor David Holt said via Twitter that this is the first time since 1989-1990 that city residents successfully submitted a petition for a sales tax vote.

If passed, the tax would generate about $14 million in additional funding for Parks & Recreation’s budget. It could be used to fund the replacement and addition of trees and plants; park programs like athletic leagues, exercise classes and other outdoor activities; capital improvements, but only for new restrooms, athletic infrastructure and bleachers; and operational expenses.

The election will be March 3, 2020, coinciding with the state’s presidential primary.

An ordinance seeking to simplify the rules for street entertainers was amended from a previous version. Ward 6 councilwoman JoBeth Hamon first brought the ordinance forward in early November. It has had a public hearing since then but was amended slightly for its final hearing.

This was because there were additional safety concerns regarding street performers along the canal, but McDermid said upon further review and advice from legal staff, they tweaked the ordinance.

“The safety concerns that we originally had for the Bricktown Canal are actually already covered within the municipal code. The police department can enforce any type of gathering in any public space that causes a safety issues,” she said. “So there was a separate, higher standard for the Bricktown Canal that wasn’t really necessary to create that extra burden on people who wanted to locate along the canal.”

“I coordinated with the Downtown Oklahoma City Inc. to work with the property owners,” McDermid said. “When they talked to them, they were surprised that this ordinance even existed in the first place. They would like to see street entertainers along the Bricktown Canal and increased activity along the canal, and they were not concerned.”

There was a public hearing for the Healthy Neighborhood Overlay intended for the 73111 ZIP code. There were no comments from the public.

The final meeting for the overlay zoning will be at the next city council meeting Jan. 7.

Ward 2 councilman James Cooper introduced a proposal to amend the city’s personnel policies to extend nondiscrimination protections for gender identity and expression. The proposal adds “and gender identity and/or gender expression” to the city’s Equal Employment Opportunity policy, which already prohibits discrimination based on sexual orientation. It only affects municipal employment.

“The cities of Norman and Tulsa and a couple of cities in Texas — Fort Worth and Austin — they have amended their personnel policies to include gender identity and gender expression as well,” said Paula Kelly from the city’s municipal counselor’s office. 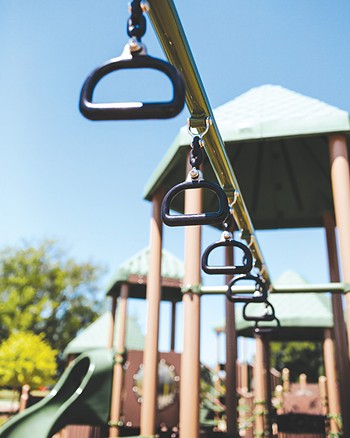 Ward 5 councilman David Greenwell wondered how the new amendment would affect any policies when it comes to bathrooms or changing rooms. Chris York, from the city’s personnel department, said the city doesn’t have any explicit bathroom policies but it is not a concern.

“While the bathroom issue is a sensitive issue, in reality and in practicality, it’s almost hyperbole,” he said. “The reason I say that is because we had maybe I can think of two cases that I can think of in recent history — and I’m talking years — where we’ve had an instance where we had gender identity and bathroom. It’s such a small subsection of the issues that we run into that I’m not concerned with some type of wholesale change.”

Ward 3 councilman Larry McAtee said he would vote no on the amendment because he believes the city should wait until federal and state policies change.

The proposal passed 7-2, with McAtee and Ward 1 councilman James Greiner, who sit on either side of Cooper, voting in opposition.

The city council voted to approve a bid on a surf machine for the Boathouse District. Initially estimated to cost $1.45 million, councilmembers narrowly approved a higher bid at $1.965 million.

“That is a little more than what we had as our estimate, but discussing that among ourselves, we think it’s still a reasonable cost,” said David Todd, MAPS program manager. “The additional items that we were going to do, some of those will be scaled back a little bit to make up for this.”

Hamon and Greenwell said they had trouble trusting the Boathouse Foundation because it has withheld information from the city in the past.

“But I want to see ways for us to support the operations of the specifically city-owned entities in the Boathouse District so that low-income and middle-income families can actually afford to go there,” Hamon said.

Greenwell made an unsuccessful motion to defer the item indefinitely, but ultimately, the council approved the bid in the consent docket.