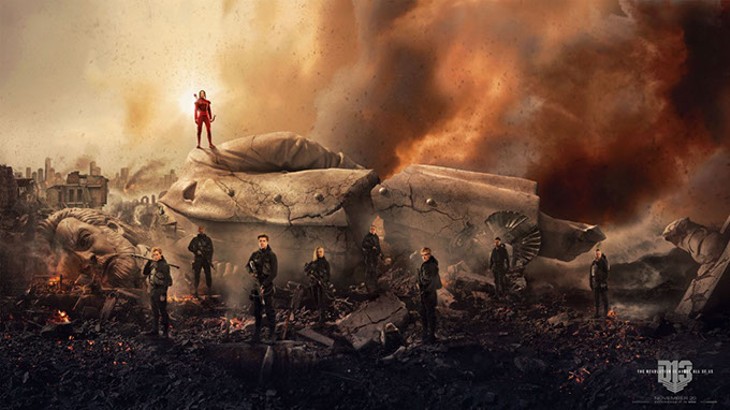 Picking up mere moments after Part 1, The Hunger Games: Mockingjay - Part 2 follows Katniss Everdeen (Jennifer Lawrence) and the rest of the resistance, led by Julianne Moore’s Alma Coin, as they make for one final, decisive push against the wounded yet still dangerous and booby-trap-filled Capitol, headed by President Snow (Donald Sutherland). Things are further complicated by the return of brainwashed Peeta Mellark (Josh Hutcherson) and his goal to assassinate Katniss.

Right out of the gate, this movie feels appropriately bigger in scale than the three previous Hunger Games films. Director Francis Lawrence (no relation to Jennifer) wisely frames the action with a wide and steady lens, allowing the audience to take in all the action in opposition to the rapid cut, shaky cam-plagued action dominating cinemas.

And while the action is grand, it also has consequences, a defining strength for this franchise. We see our heroes celebrating over rubble and vast destruction, with the severe loss a mere afterthought in the wake of victory, too often in modern blockbusters. Mockingjay - Part 2 offers no such “stand up and cheer” moments. Victory doesn’t come from slaying one’s enemy or rousing speeches. After all, who wins when the streets are lined with the bodies of innocents caught in the crossfire? Does Coin’s new order become no better than those that came before, or is the cycle of violence broken by finding common ground with a bitter enemy? They’re all-too-real questions, but then again, this series was never about easy choices.

The debate rages on whether or not splitting the final installment of a franchise in half is a cynical cash grab on the part of studios or an earnest opportunity for filmmakers to provide fans with more bang for the their proverbial buck. This last chapter of The Hunger Games does very little to provide definitive answers. Quieter character-building moments and fan service come at the expense of plot momentum and often feel like filler. While it fares better than its predecessor, Part 2 lacks urgency. At one point, Katniss even admits, “It gets a little tedious after all these years,” and it’s hard to argue.

Speaking of Katniss, Jennifer Lawrence finishes off her now-iconic role as the heroine with all of the grit and humanity that has made the character so enduring. The rest of the cast get moments to shine here and there in the time they are allotted. Great performers — including franchise favorites Woody Harrelson, Elizabeth Banks, Jena Malone and the late, great Philip Seymour Hoffman (in his last onscreen performance) — are given scraps of dialogue, but such is the nature of the beast when the film must tie up so many loose ends and provide closure for a small army of characters.

As is the case with many film franchises these days, this final chapter is easily the darkest in the group, so parents might use caution before bringing along the kids. Mockingjay - Part 2 serves as an appropriate ending to a series that never promised sunshine and lollipops.

Print Headline: Fortified finale, The final installment of The Hunger Games series provides a dark end to the story.