In a string of stellar meals, I’d be hard-pressed to find one better than the redfish. Anyone who loves spice and seafood will probably be a fan. 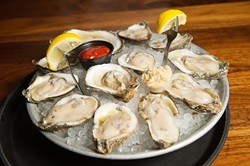 It’s not a problem with killing animals but more that after 37 years of knowing me, he’s probably not comfortable with the idea of me holding anything more dangerous than a cellphone.

So I’ve never seen the inside of a hunting lodge, but if I had to imagine one, it would look a lot like the inside of Trapper’s Fishcamp & Grill, 4300 W. Reno Ave.

Even on a sunny day, the inside of Trapper’s is cool and dim, giving the restaurant an air of intimacy, which is quite a feat given the massive dining room. The walls are lined with hunting trophies of all types, so there’s really no mistaking what this menu is about.

This is a place for meat. And just because it has “fish” in the name doesn’t mean seafood haters won’t find a plethora of options.

However, as a seafood lover, I like to start with oysters on the half shell (six for $10 or a dozen for $19). If you’re looking for a deal, hit up Trapper’s (or Pearl’s Oyster Bar or Crabtown, all in the same family of eateries) on Tuesdays for the Buck a Shuck promotion, which drops the price considerably.

Other restaurants might get their oysters from a variety of locales, but Trapper’s sticks with the large, mildly sweet variety from the Gulf of Mexico. There are plenty of ways to eat an oyster, but I like mine with just a squeeze of lemon and a touch of horseradish. Hot sauce and cocktail sauce are acceptable, but they cover too much of the flavor. Slurp it out of the shell, juice and all, for a light, invigorating taste of the ocean. 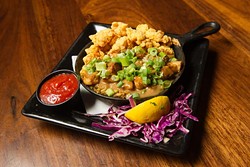 If you’re not comfortable with eating raw food, how do you feel about food that might eat you raw? The alligator appetizer ($12) comes fried or blackened, but for first-timers, I recommend ordering it half and half.

Trapper’s recently began a campaign challenging other restaurants’ fried chicken to a taste off with its Ultimate Fried Chicken ($17, including salad, mashed potatoes and cream gravy), and with good reason.

Diners get two pieces of partially deboned white meat chicken that, based on the consistency and the degree of juice, had to be brined. It’s a delight. You can eat it with your hands, but with the bones largely removed, it’s just as easy to use a knife and fork.

The chicken doesn’t need the gravy — it’s seasoned before being dredged and fried — but it’s a pretty tasty cream gravy. The mashed potatoes are homestyle with enough body to remind you that a real potato actually gave up its life for your dinner.

Is this the best fried chicken in the city? I’m not sure. But it’s definitely in contention for the crown.

I wanted to love the fried catfish filets ($19, with french fries and coleslaw), but they were just okay. The flavor was mild, which is much better than some catfish that comes across all muddy, but Trapper’s could definitely use more seasoning here. One way to really boost the taste is to put the catfish in a sandwich, which is how the po-boy ($10) is served. Coleslaw and tomatoes add moisture to the filets on a bun, and a dash of hot sauce really amps things up. 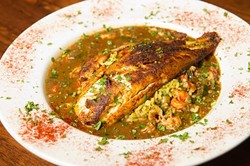 If you’re set on fish, which is a pretty good idea here, then you want the Redfish Pontchartrain ($24).

Lake Pontchartrain is not technically a lake but an estuary, a home to the immature red drum or redfish, which was made famous by the late chef Paul Prudhomme.

At Trapper’s, it’s served in Prudhomme’s classic blackened style over rice and crawfish étouffée, which is just about the best way to serve a thing. The fish is pan-fried with lots of seasoning, giving it a nice heat and a bold flavor. That’s important when you’re serving anything with the deep, dark roux of crawfish étouffée.

In a string of stellar meals, I’d be hard-pressed to find one better than the redfish. Anyone who loves spice and seafood will probably be a fan.

It even beat out another lovely dish, the aptly named Field & Stream ($25, including salad and mashed potatoes). Pairing rainbow trout and grilled quail, the entree is packed with flavor.

The birds come out a rich mahogany with a nice, dark meat texture. Don’t bother with a fork for this part of the meal. This begs to pulled off the bone with your teeth and fingers. Quail isn’t as mild as chicken but is far less gamey than duck, so it should be okay for most diners.

The rainbow trout, despite being served with sauce, was a touch dry. The flavor came mostly from capers and lemon, which is good flavor to come with, but the fish didn’t stand out next to the much stronger quail.

The influx of new eateries to the city is powerful, but it’s nice to see that Trapper’s, with 22 years of service behind it, is still going strong. The menu is solid, the food is fresh and the service is great. It’s the kind of restaurant for which most of us are hunting.

Print Headline: Go fish, Even the seafood averse will find a meal worth capturing at Trapper’s Fishcamp & Grill.

What works: Redfish Pontchartrain and fried chicken are shooting straight.

Tip: Tuesday’s Buck a Shuck is a killer deal for oyster lovers.