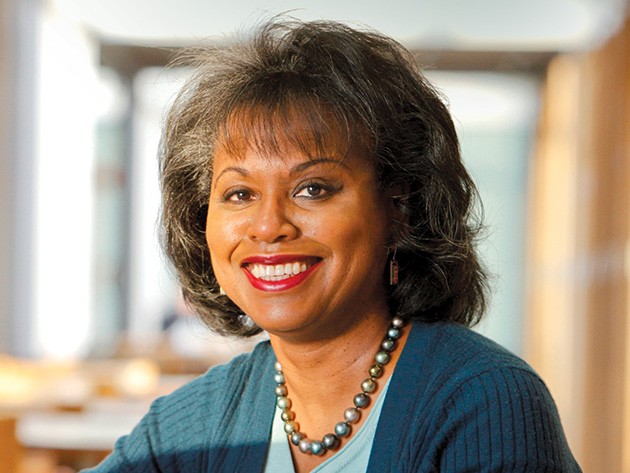 Former University of Oklahoma law professor Anita Hill entered the national spotlight in 1991, testifying against U.S. Supreme Court nominee Clarence Thomas, whom she accused of sexual harassment. Though Thomas went on to be confirmed as a Supreme Court justice, Hill’s legacy transcends those Senate hearings and lives on in modern movements like #MeToo.

Now an advocate of racial and gender justice and a professor of social policy, law and women’s studies at Brandeis University, Hill continues to be a catalyst for change toward equality. In fact, Hill currently chairs Hollywood Commission on Sexual Harassment and Advancing Equality in the Workplace, a commission created by some of the biggest entertainment institutions to combat sexual misconduct in the industry.

Oklahomans will have a chance to hear Hill speak at a University of Science and Arts of Oklahoma (USAO) fundraising gala. The gala will raise money for USAO’s newest project, Dr. Ada Lois Sipuel Fisher Center for Social Justice and Racial Healing.

“Bringing in Anita Hill is the perfect way to demonstrate the sensitive, often painful, but very necessary work that we will do at the Center for Social Justice and Racial Healing,” wrote Dr. Tonnia L. Anderson, director of the center, in a press release. “Through the various facets of the center’s curriculum, we hope to instill the value of empathy, demonstrate the power of participatory political education to create social change, and the necessity of civic engagement to amplify the power of communities and strengthen our democratic institutions.”

In an interview with Oklahoma Gazette, Hill said she wants to emphasize the important work the center can do for society.

“I really want to talk about how important this center is for everyone, especially for the university, but for really everyone in the community as well,” Hill said. “I think what we have to do for the center to flourish is that we have to believe that social justice, however we come to define it, is something that we can all agree is a goal for our communities. That everyone feels they are socially equal, that they are socially welcome and that their contributions are being valued.”

Fisher graduated high school as valedictorian and went on to graduate from Langston University with honors. In 1946, she challenged the segregation of University of Oklahoma (OU) College of Law. Going all the way to the U.S. Supreme Court, Fisher convinced the judges to unanimously rule that Oklahoma must give African-American students equal quality education. Though she had to keep fighting, Fisher was finally admitted to the law school in 1949.

“Dr. Fisher was always the one who herself believed in full participation, civic participation, being engaged,” Hill said. “It’s one of the things that she exhibited way back in the 1940s when she was a very young woman, going across the state of Oklahoma, telling people about why it was so important to have integrated higher education systems. … To have a center that’s focusing in part on political participation named after Ada Lois Sipuel Fisher is just perfect because it shows one of the aspects of her existence and her experience.”

Hill, who taught at OU College of Law, knew Fisher while she served on OU’s Board of Regents. Hill said she feels humbled and proud to get to speak at a gala that honors Fisher. She tells Fisher’s story often as a model of lifelong commitment and determination to justice.

“I’m just excited to pay tribute to a woman who has paved the way for so many, including myself.” — Anita Hill tweet this

“The idea that she could go from suing the University of Oklahoma in 1946 to being on the board that she sued in the late ’80s, I think it’s just an astounding story,” Hill said. “She rejected this idea that there should be a separate, segregated law school for her. She turned it down and said, ‘No I’m going to stay in here, and I’m going to fight for this.’”

Like Fisher, Hill was born in Oklahoma. She said she is excited to return, especially to honor someone who means and signifies so much to her.

“I’m excited that I get to come back to Oklahoma to see my family, but I’m really excited to be able to be a part of this new center,” Hill said. “On a personal level, I’m excited to pay tribute to a woman who has paved the way for so many, including myself. I stand on her shoulders, as do many, many other women and men.”

Just because Senate members might not have learned much since 1991, Hill said, does not mean society has not evolved. She said people shouldn’t judge society by the leadership of the Senate.

“If people think that the Senate hasn’t changed enough, we have the best system in the world to make sure that it does. People can get out and vote,” she said. “We have a system that allows us to change our leadership, to call our leadership into question and to hold them accountable either in public forum or at the ballot box.”

The 2018 hearings came almost a year after the #MeToo movement gained national attention and media coverage. Countless women, many in roles with power and authority, came forward and joined the movement, saying they too had been victims of sexual harassment. Hill said the movement, while discouraging in some ways, has motivated more women to stand up for themselves and get involved.

“In my experience, what I have found is that there are many, many people who will say, ‘Look. This person stood up. I have a chance to stand up for what I believe and to protect myself, and now I have a model for how to do it right,’” Hill said. “A lot of people don’t even know that they have a right to resist. They’re waiting for information and they’re waiting for some inspiration as well.”

The year after Thomas’ confirmation as Supreme Court justice is known as the Year of the Woman because more women were elected to Congress than ever before. Many credit this to the anger women felt watching Hill being questioned by a committee full of white men on national television. Hill said anger continues to be an important motivator for people to get involved politically but that USAO’s center and similar institutions can help keep people involved.

“People should get angry in the face of injustice,” she said. “What the center can do is to keep people engaged throughout. The center can also … provide the ideas and the research to support our arguments for change. So it’s important that the center is going to be at a university where we can come together and study these issues, make recommendations of how to directly confront them, figure out what does work for positive change and what doesn’t and then share that information, not only with our students, but to the public.

“I know that there are many people in this country who want to see the kind of behavior that we hear about in the paper that angers and saddens us to end, and they’re looking for help on how to make it happen.”