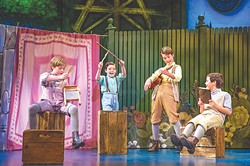 Unless one is already familiar with the 2004 film starring Johnny Depp and Kate Winslet, it can be hard to know for sure what the Finding Neverland stage musical is about.

OKC Broadway brings the former Broadway production’s national tour to local audiences. Lael Van Keuren, who plays the musical’s female lead, Sylvia Llewellyn Davies, said many assume the show is another telling of the classic Peter Pan story or some other take on the 1904 fantasy by J.M. Barrie.

“I’ve had some audience members say they thought it was a Michael Jackson musical because of the title Neverland,” Van Keuren said in a recent Oklahoma Gazette interview. “I do think a lot of people haven’t seen the movie and they come in not knowing what to expect, and I think that’s incredible too, because we’re going to take you on a journey.”

Like the film of the same name, the musical version tells the story behind the story. Barrie is a writer who has just seen his most recent play flop. He befriends sickly widow Davies through a chance meeting and forms a close bond with her and her four sons, George, Jack, Peter and Michael. He uses his experiences with the family as the basis for a new play about a boy in a magic land who never grew old. But as he grows closer to the family, others begin to question the nature of Barrie’s relationship with the Davies and try to force them apart.

Van Keuren said the stage version and the movie version are very similar. Some lines from the musical are close, if not complete, duplicates of the movie dialogue.

The biggest differences are the added musical numbers in the stage show, which Van Keuren feels enrich character development. Plot is progressed with the help of a beautiful score by Take That lead singer Gary Barlow and Eliot Kennedy. Finding Neverland also features expert choreography performed by dancers Van Keuren said are some of the best in the industry.

The stage version replicates the film story but frames it in a starkly new way.

“It’s similar, and it’s not,” she said. “[Audience members] are going to be seeing new character developments. I think musicals heighten all aspects of a character’s creative life onstage.”

When Finding Neverland began its off-Broadway national tour in October 2016, Van Keuren was in the cast as an understudy to Davies’ character and a member of the ensemble. She worked through her contract with the production for several months, and when her time was up, she returned to her New York home to pursue other auditions and opportunities.

A few months passed and Van Keuren’s agent called saying the show wanted her as the female lead for the tour’s next leg. The actress was both elated and shocked by the news.

“In my mind, I was like, ‘Oh my gosh! Well, of course I’ll audition,’” she said, “but never in my wildest dreams did I think they would make me the offer and bring me out as one of the leads. Needless to say, I’m beyond thrilled to be here.”

Van Keuren remembers seeing the Finding Neverland movie for the first time as a DVD rental a short time after its original run in theaters had concluded.

“I haven’t seen it since then, believe it or not,” she said. “But it left an impact. I just remember it being so wildly creative and beautiful. I think we’re all kind of fascinated with how this came to be — the story before the story.”

Years later, the actress went to a show on Finding Neverland’s original Broadway run, which included actor Matthew Morrison as Barrie, Laura Michelle Kelly as Davies and Kelsey Grammer as producer Charles Frohman, who served as Davies’ inspiration for Captain Hook. Van Keuren never could have guessed that she’d be playing Davies herself one day, but she always felt a connection to the character.

“I just remember thinking, ‘Oh, wow; I understand this woman,’” she said. “Getting to speak her lines and sing her songs, right away, it felt like a fit. She’s so heart-first, and I think she just wants the best possible life for her children.”

Van Keuren stars opposite actor Will Ray in the production’s current version. The actress said she particularly enjoys the dynamic between the Barrie and Davies characters.

“They share such a sweet, simple, but totally inspiration-driven connection,” she said. “That was really, really cool to explore with the actors that play opposite me.” 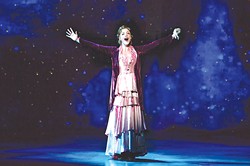 Van Keuren now lives in New York but grew up in neighboring New Jersey — just close enough to still see Broadway shows with her family. Theater was the focus of Van Keuren’s life nearly from the beginning. She remembers deciding life on stage was her calling at age 7.

In addition to theater, it is also fair to say that van Keuren was raised on Peter Pan. As a child, she he was obsessed with a 1955 television production of the story starring actress Mary Martin, watching the VHS tape over and over again.

It registered in her young mind that there was an actress portraying a young boy, but it did not strike her as anything unusual.

“I think I just kind of accepted it,” she said. “I thought, ‘Oh, she’s playing an eternal child and she happens to be a boy named Peter.’ I don’t think I thought anything of it — it was just, ‘Yup, this is how it is.’”

Like many other children, Van Keuren was also a big fan of the 1953 Walt Disney animated version. Many Finding Neverland cast members got their starts in different stage variations of Peter Pan, which is a school and community theater staple across the country.

Pan has been portrayed by many actresses through history, even in its earliest stage versions. Van Keuren said it’s a testament to a child’s innocence and capacity for acceptance that the portrayal is rarely brought into question. Finding Neverland attempts to echo a similar sentiment.

A bit of childlike wonder is good to keep in one’s heart and spirit at any time, but Van Keuren said Finding Neverland’s message is especially needed in a time of endless, dark news cycles and cynical polarization.

“Part of the reason I got into theater is the joy of being able to take an audience away for two and a half hours,” she said. “I love that there is a hopefulness and a fearlessness in this show that comes from when you just leap.”