Fine art finds a home in a local tattoo studio 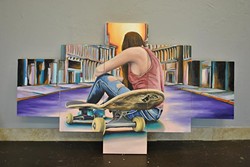 Tucked unassumingly into Mayfair Village shopping plaza at NW 50th Street and May Avenue, shouldered alongside a barbershop, a craft supply store and a chain department store, The Ink Hub Tattoo and Fine Art Gallery at first blush might cause a double-take. The low-key location doesn’t exactly holler, “Tat shop!” and the storefront itself appears more straight-laced than severe. Owners/artists Drew Shurtleff and Leah Cottrill said the buttoned-up image is on purpose.

“We’re not scary people at all,” Shurtleff said. “We’re trying to create the most positive vibe we can. We keep the windows big and open. We don’t have crud all over them or have them blacked-out. People want to be able to see in, and if they see a big, clean, open gallery space, they’ll feel more comfortable coming in. We want everybody to feel welcomed.”

“Sometimes clients who are getting tattoos will even bring their kids to the shop,” Cottrill added. “We’re good with that.”

The Ink Hub celebrates its first birthday in October, and business is brisk. The couple credits its success to a friendly, non-judgy atmosphere. They’ll accommodate anybody’s design request as long as it isn’t mean-spirited.

“No hate, gangs, violence or anything that is going to promote major negativity,” Cottrill said.

Besides Shurtleff and Cottrill, this polished, non-intimidating ink boutique is also home to artists Jeremy Smith and Waymon Thompson, each kicking out strictly original work. Shurtleff is picky when adding artists to his shop. Along with other more attitudinal prerequisites, he looks for apprentices who already have an artist’s gene.

“There are a lot of people out there who are not artists who do tattoos,” he said. “You can learn the trade and you can learn the craft, but you cannot teach someone the artistry. They have to innately have that within them. We can definitely hone it and build it, if the talent is there. But definitely there has to be some sort of talent there in order to be successful in this business.” 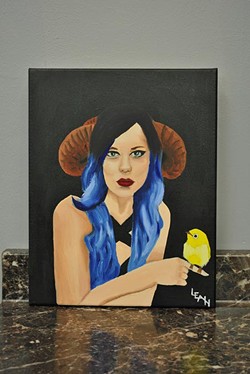 The Ink Hub thrives on originality.

“We try to keep everything custom here,” Shurtleff said. “In the 12 years I’ve been in the business, I’ve seen an over-saturation of Pinterest kinds of things and the same random image over and over. So we definitely strive here to make sure people are getting something unique that is meaningful to them, for them, only them. It’s not going to be redone on someone else, somewhere else. We don’t resell images or anything like that.”

But even with all that pioneering ink work and neighborliness, a business model that combines tattoos and a fine art gallery might still, for the under-educated, seem like an awkward mishmash; something akin to a luck-of-the-draw pairing of dorm-mates.

A cursory glance at Cottrill’s personal body art, however, begins to open the mind. That’s where several of Shurtleff’s vibrant, realistic, painting-style tattoos reside, such as the portrait of Green Day frontman Billie Joe Armstrong that lives on Cotrill’s right arm. Suddenly, the caliber of work becomes evident; it isn’t your grandpa’s tattoo parlor.

Cottrill first fell in love with art thanks to a high school class, and Shurtleff has been drawing since he could hold a pencil, creating his own comic books and cartoons. He was pursuing a graphic arts degree at the University of Central Oklahoma when his dad, lifelong local artist Ray Shurtleff, approached him about doing tattoos. The younger Shurtleff promptly dropped out of college and the two opened Blues Tattoos in Edmond, where they were considered industry trailblazers of sorts. The year was 2006, and the body art craze in Oklahoma was just starting to stretch and wake up.

Later, thanks to his classic and commercial art background, Shurtleff was inspired to design The Ink Hub with half of the square footage dedicated to gallery space.

The gallery walls stay dotted with local art year-round, and it’s for sale. The pieces are not necessarily the work of colleagues in the tattoo world, but some are, and all are Oklahoma-based.

Cottrill is the gallery’s director and curates the perpetual display as well as prototypal exhibits like upcoming Women of the Ages Art Show, which opens at The Ink Hub Sept. 16.

Shurtleff described the event as a showcase of women throughout history and the substantial ground they’ve stood. He said the inspiration for the show came from the rocky political climate.

“There’s just been a lot going on, and a lot of it geared toward making women feel unappreciated and disempowered,” Shurtleff said. “We hope the Women of the Ages Art Show will carry the message that women can be just as empowered as men. There should be no sex discrimination. There is so much anger and hate going on right now that we thought, ‘You know what? Let’s show some of the beauty. Let’s show people there are much more beautiful things out there to focus on.’”

The Women of the Ages group show spotlights pieces that celebrate the female form and speak to the strength of women. The show is comprised of works by exclusively local talent, including Jay MF Roberts, Josh Reynolds, Bobby Deneen, Viking Ashley, Jordan Tacker, Effin’ Josh, Graham Edwards, Nora Bisher and others.

“We definitely want to support state-based artists as well as support and expand the local art community,” Cottrill said.

They are so devoted to local art that Women of the Ages marks the gallery’s fifth opening.

Motorists on May Avenue might never even notice the unobtrusive, little strip-mall storefront. And nor, without a closer look, might passersby recognize the passion, social awareness and artist-lift-ups happening within.

Women of the Ages Art Show