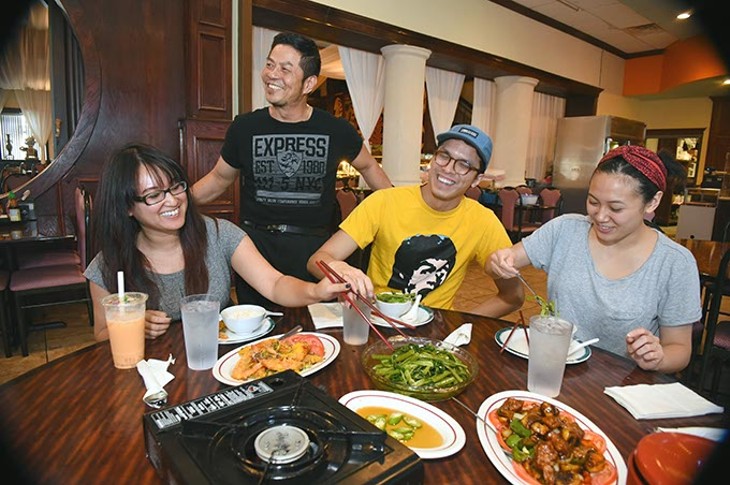 There is a wrong way to eat Chinese food, and it starts with the buffet.

Some might think of Hy Palace only as the Super Asian Buffet, but Nguyen and fiancee Linda Phan are quick to point out that almost every Asian family they know uses the expansive building for special events. They plan to have a wedding reception there.

They are first-generation Americans with parents who came from China and Vietnam. Straddling the line between their family heritage and their American upbringing, they are exactly the people you want ordering.

The steam tables might be stocked with the usual takeout fare, but the menu at Hy Palace is full of Chinese and Vietnamese gems they grew up eating. And there are pitfalls.

Texture, said Michelle Nhin, is a biggie. She said the uninitiated are often put off by foods that are chewy.

She and Phan mimed the chopping of chicken, which leaves bones and connective tissue in the meat.

“When it says ‘chopped chicken,’ that means the whole chicken,” she said. “Shredded chicken is pulled off the bone.”

Another word to look out for is h?p, which means steamed — especially with chicken, when diners might find that limp chicken skin is not their favorite.

Nhin grew up around her family’s restaurants — Hunan Garden, Nhinja Sushi & Wok and Park Harvey Sushi & Sports Lounge — and has seen her fair share of people blanch at foods they don’t understand.

When someone orders fish, it’s okay to ask if it’ll be filets or chunks or a whole fish. Phan said there’s an etiquette to eating a whole fish.

“Eat one side first. You’re supposed to offer the cheek to the elder because it’s the best part of the fish,” she said.

Menus are full of dishes that will remind diners that what they’re eating was once alive, Nhin said. The connection to their food, making sure to use every part of the animal, is important.

“My grandma said you have to look the chicken in the eye before you kill it,” she said.

If you don’t like knowing your food came from an animal, it’s probably best to order the tofu.

Though Vietnamese beef noodle soup (pho) is pretty easy to navigate — stay away from tripe and tendon if you don’t like to chew — it’s rare to find a Vietnamese restaurant that can do what she considers traditional foods.

“Vietnamese cuisine is all about what’s fresh now and using local ingredients,” she said.

The names might be similar, but be aware when ordering appetizers that — much like the seasons in Oklahoma — spring and summer rolls are different creatures. Spring rolls (ch? giò) are fried, while summer rolls (g?i cu?n) have shrimp or pork rolled with fresh greens and rice vermicelli inside sticky rice paper. Both are pretty tasty.

Bui said she often wishes people would branch out from pho and try the vermicelli bowls, or bún, which incorporate noodles, bean sprouts, lettuce and other vegetables with grilled meats.

And stop trying to make bánh mì into other foods, she said.

Nhin said the language barrier is always an issue. Restaurants don’t always care about menu typos — they’re too busy making sure their kitchens are up to code and the food is good.

Nguyen said a common misconception is about the word “pepper.”

“When you order salt and pepper pork, it’s not black pepper. It’s peppers,” he said. “And you’re not supposed to eat them.”

One way to mitigate the risk of a bad dish is by ordering several and eating the way it was intended — family-style. No one expects you to polish off a plate by yourself. It’s food that’s meant to be enjoyed and shared.

With a little help from friends, you’ll say so long to old trays of chicken lo mein and sweet and sour pork and hello to fresh, delicious dishes, and your only fear will be not ordering enough.

Print headline: Decoder ring, Choosing the best food at Asian restaurants might mean stepping away from the buffet.