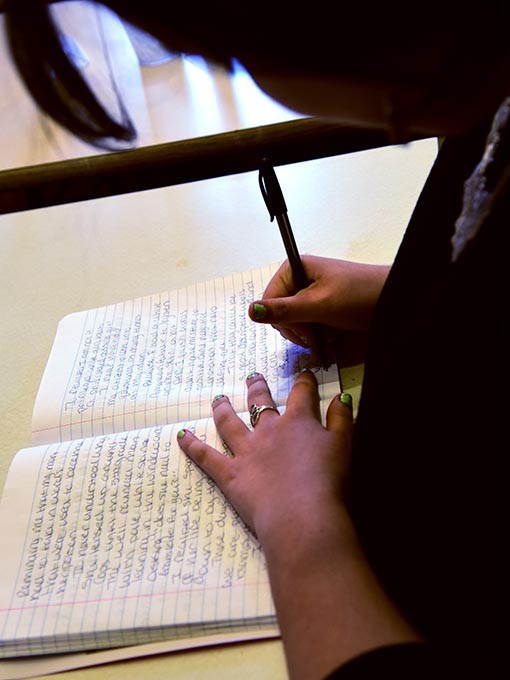 “Honestly, it’s overwhelming. There’s not words to describe how amazed [I am] I received such an honor,” Brown-Bright said.

Brown-Bright pulls inspiration for her craft from her everyday life, heritage, struggles and social justice issues. At the commencement ceremony, she read a poem called “Education Blues” about the educational issues that need to be fixed in Oklahoma and the dedicated people who are trying to make a difference.

Brown-Bright, a junior at Harding Fine Arts Academy, believes her teachers have contributed to her education and helped put her on a path to win this award.

“I think a lot of it is certain teachers who have constantly supported me through my journey of being a poet ... My school has definitely lifted me up to a whole new level that I don’t think I could have achieved without them,” Brown- Bright said.

Her freshman English teacher, Anna Kinder, has had the greatest impact on Brown-Bright because Kinder encouraged her to write and perform at a Red Dirt Poetry night. This is where Brown-Bright would find her first community of poets.

The Red Dirt Poetry group has supported and encouraged Brown- Bright, critiqued her work and pushed her to become a better performer. Brown-Bright is further inspired by some of her favorite poets, including N. Scott Momaday, former Oklahoma Poet Laureate Lauren Zuniga, Suzi Q. Smith, Jesse Parent, and Red Dirt poet Melissa May.

As part of Brown-Bright’s award, she will receive a book deal with Penmanship Books in New York City. She is working to choose her best work and write new poems for the book, which will include about 20 poems and should come out in October.

Brown-Bright will also travel on a public library tour to perform her poems alongside the other finalists.

“I’m hoping a lot of poets I haven’t met come out, and I hope that a lot of youth come out just to see that you don’t have to be older to succeed in the poetry scene. I think I’m most excited about getting to inspire other people like I was inspired,” Brown- Bright said.

After high school, she wants to earn her bachelor’s degree at a university like Stanford before attending seminary school to become a Unitarian Universalist minister.

Brown-Bright volunteers with Feed the Children and Regional Food Bank of Oklahoma and tutors other students at Harding. She is a member of Speech & Debate, founder and president of the Gay Straight Alliance and a worship leader at Congruity, a Universalist Unitarian Youth Social Justice Conference.